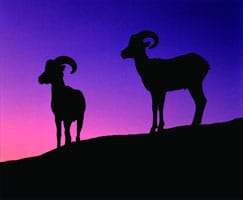 The twin peaks of Toro and Santa Rosa have been watching over the Coachella Valley pretty much forever. (To locate them, look south from El Paseo in Palm Desert until you spot the two bumps that look like a bull’s horns.) Forever is a long time to witness the affairs of man, and you could forgive these sentinels if they took a blasé attitude.

After all, the peaks were here when the Cahuilla Indians danced on their boulders and dug agave hearts on their slopes. They stood firm in 1775 when Juan Bautista de Anza led 200 men, women, children, and horses beneath their flanks.

Later came the loggers and the prospectors raving about a lost emerald mine guarded by a rock shaped like a wolf’s head. And there were the Marines who set up barracks atop Toro and dashed radio signals to Yuma and San Diego. Lovable eccentric Desert Steve Ragsdale built a tree house in the mountains and painted poems on their cedars.

All these characters came and went, along with earthquakes on the Pacific Plate, calamitous floods in Deep Canyon, spring blooms, and winter freezes. Then in 2000, Toro and Santa Rosa, along with 272,000 acres of surrounding mountains, got a new designation: Santa Rosa & San Jacinto Mountains National Monument. The goal was to protect the nationally significant biological, cultural, recreational, geological, educational, and scientific values of the mountains.

Given all that had gone before, Toro and Santa Rosa didn’t take much notice, but the announcement was a big deal in the land of humans. In fact, the national monument designation is the Academy Award of public lands. Lots of people worked to secure the title and to hammer out a unique management partnership among the U.S. Forest Service, Bureau of Land Management, Agua Caliente Band of Cahuilla Indians, and other interested parties. Boosters included U.S. Rep. Mary Bono, former Palm Desert Mayor Buford Crites, Jeff Morgan and Joan Taylor of the Sierra Club, first Monument Manager Danella George, and Ed Kibbey representing the building industry.

That was six years ago. That’s long enough to ask questions: What has the designation done for Santa Rosa, Toro, and their more statuesque brother, 10,834-foot Mt. San Jacinto? What has it meant for ancient rock drawings and the rich concentration of threatened and endangered plants and animals that live here?

How do you grade a national monument anyway? A national conservation group, the Wilderness Society, has attempted the task — issuing grades to 15 national monuments and other units of the BLM’s National Landscape Conservation System, which manages monuments. In the society’s report last year, the Santa Rosa & San Jacinto Mountains National Monument received only a C grade, but almost all the monuments got Cs or Ds because of inadequate funding and staffing levels. The NLCS is poorly funded compared to national parks and wildlife refuges.

Circumstances, then, make it difficult for monuments to shine, but shine ours does in certain ways.

Wild stories – The monument was awarded its highest grade for a category called Protecting Wild and Primitive Character. With steep topography and only 17 miles of roads in the monument (including dirt roads), there is little human intrusion within the higher, wilder places. By the criterion of protecting the landscape, Jeff Morgan of the Sierra Club says, “The monument is a success. Calling it a monument has increased respect for the mountains. The typical person in Palm Springs doesn’t want building up there.”

Another success, according to Wilderness Society Project Director Geary Hund, is the monument’s ability to attract funding. Despite the budget constraints of monuments overall, Hund says Bono has been able to bring in more than $3 million for management and land acquisition.

The bounty extends to the efforts of the Coachella Valley Mountains Conservancy and Friends of the Desert Mountains. Conservancy Associate Director Katie Barrows says the groups have been buying private land within the monument, especially along Highway 74. Thanks to their efforts, the scenic corridor through the monument will be preserved rather than developed. “The monument and the mountains just grab people’s interest and hearts,” Barrows says.

When hearts are engaged, things begin to happen. The monument designation helped Forest Service archaeologist Daniel McCarthy fund a project to map agave clusters in the mountains, a study that will show how early Cahuilla Indians used the succulent plants as a food source. And BLM archaeologist Wanda Raschkow was able to hire a team to complete an 8,000-acre inventory of cultural resources, yielding a clearer notion of which areas within the monument were most vital to the Indians.

Buoyed by the momentum of the young monument, Raschkow also has started a Site Stewardship Program that enlists volunteers to help protect fragile sites and an Oral History Program (with the Agua Caliente Band of Cahuilla Indians) to record the stories of early mountain residents.

Domestically, travel writers have been slower to catch on. Visitor Center greeter and Interpretive Ranger Bonnie Adkins says the DVD Voices of the Monument, produced by Palm Springs Life Associate Publisher Frank Jones, helps visitors understand what we have here.

To some visitors, the monument’s low profile is the best thing about it. “It’s still a discovery experience,” says Acting Monument Manager Jim Foote.

Deputy Monument Manager Gina Thompson agrees. “There are a lot of things here that haven’t really changed in 1,000 years,” she says.

“It feels like a wildlands experience from long, long ago.”

On the lookout – So far, the old Cahuilla trails are still refreshingly untrodden, the hillsides free of signs and kiosks. Adkins predicts that as the Coachella Valley develops and open space vanishes, the monument will become “a resource for sanity.”

Solitude-seeking crowds, however, could threaten historic and prehistoric artifacts hidden in the mountains. Because of a lack of funding for surveys, archaeologists don’t even know the location of potentially significant sites — making them hard to protect.

As for the flora and fauna, the Wilderness Society’s report says it’s too early to determine how more visitors may affect the threatened and endangered species that abound here. Bighorn sheep are one resident that could lose out if monument designation brings more people to the trails, says Jim DeForge, executive director of the Bighorn Institute.

Up on the peaks where the pines bend to the wind, Toro and Santa Rosa remain watchful as ever. But now, at last, folks are watching out for them, too. The Wilderness Society, with a new office in Idyllwild, is lobbying in Washington for our mountains.

And Bono promised during a talk in Andreas Canyon that she would never give up on the monument. “It’s my baby,” she said. “I’ll fight for it forever.”

Voices Of The Monument

Take a journey and discover one of North America’s most unique and diverse mountain ranges. Learn about the native Cahuilla Indian Tribes and how they survived in such extreme environments. Soar over some of the most spectacular geological landscapes from indigenous palm oasis to one of the largest rockslides in the world. View spectacular footage of the endangered and illusive Peninsular Big Horn Sheep; plus a range of animal, bird and plant life encompassing five different life zones. Shot in spectacular high definition HDTV you’ll experience the detail of this diverse and seldom seen land. Proceeds from the sale of this Emmy® Award winning documentary will go to the Santa Rosa and San Jacinto Mountains National Monument.

Preview a short clip of the DVD