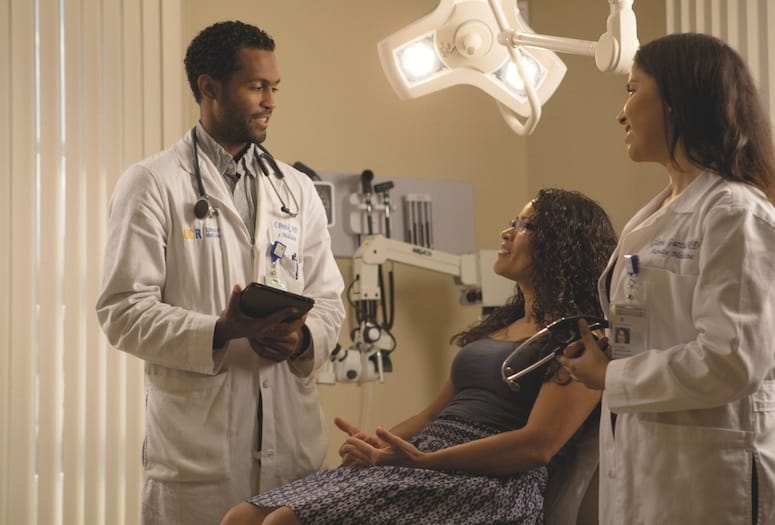 UC Riverside Medical School has established a residency program at Desert Regional Medical Center in Palm Springs to help ease the shortage of primary care physicians throughout the valley.
PHOTO BY ETHAN KAMINSKY

From the time Nellie Coffman, the daughter of a Santa Monica hotelier, came to Palm Springs in 1908 to quell her nagging cough and open the legendary Desert Inn, other people seeking a more healthful climate — first for tuberculosis and respiratory treatment, and later for orthopedic and cosmetic procedures — have made the dry desert a magnet for wellness-seekers.

In lockstep with the century’s population growth, the healthcare industry in Greater Palm Springs has ballooned with opportunity. Its expansion is about not only providers and their support staff, but also innovators in medical technology and other areas of health and wellness.

As the population of the east valley grows at almost twice the national rate — 7 percent versus 4 percent, according to Truven Health Analytics — local healthcare providers have responded in kind: JFK Memorial Hospital in Indio, for example, has completed more than $4.3 million in capital improvements in the last 18 months. 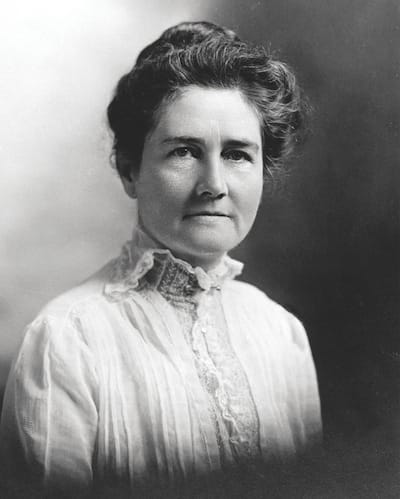 PHOTO COURTESY OF THE PALM SPRINGS HISTORICAL SOCIETY
Nellie Coffman opened the storied Desert Inn as a retreat for people suffering from tuberculosis and other respiratory conditions, and, in the process, cracked open the Coachella Valley’s hospitality industry.

Chief Executive Officer Gary Honts cites other factors feeding demand: “The Coachella Valley is a natural destination for elective procedures because of the high quality of care,” he says. “Healthcare continues to evolve to a more outpatient-driven industry.”

To that end, JFK partners with a network of physicians and clinics to meet the demand for elective procedures, which also encourage medical tourism and even make the desert communities a destination for people living with Alzheimer’s disease, arthritis, and other conditions common to an aging population. 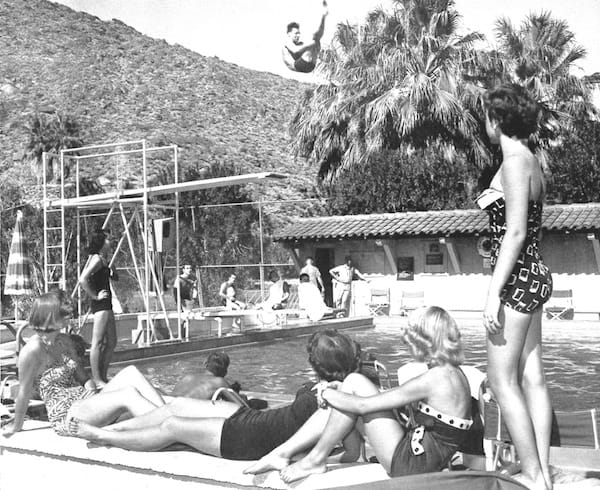 PHOTO COURTESY OF PALM SPRINGS LIFE ARCHIVES
The Desert Inn opened the door to the hospitality industry in the Coachella Valley.

Three years ago, Desert Regional Medical Center in Palm Springs launched an initiative specifically for Canadians who live in the desert half of the year. In Canada, they might wait as long as 18 months for a hip or knee replacement. Desert Regional’s cost-effective procedures significantly reduce that time, enabling patients to plan.

The greatest needs are primary care doctors, physician assistants, and nurses. Desert Regional aggressively recruits primary care physicians, says CEO Carolyn Caldwell, who credits a measure of the hospital’s success to its partnership with UC Riverside, which has established a primary care residency program here. “As of July 1, we had our second class of eight family medicine residents,” Caldwell says. “UCR focuses on young men and women who have an interest in staying in the Inland Empire, or people who have a connection here.”

In addition, the first class of 11 residents for internal medicine arrived in late June. There are 13 residents in emergency medicine, eight in neurology, and six in neurosurgery. The residencies typically last five years. That’s 52 residents so far. In five years, there will 114. 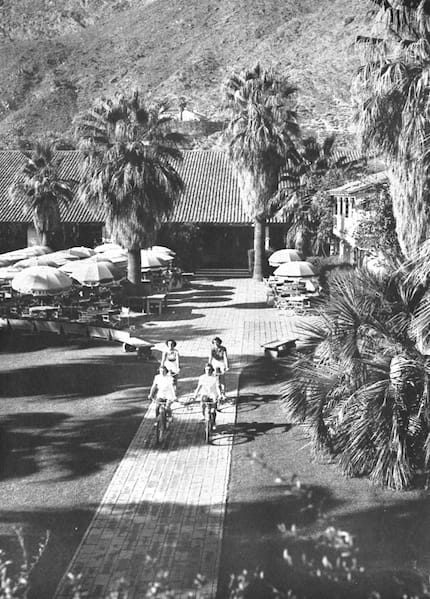 “What this does is two things,” Caldwell explains. “In addition to addressing the need for new physicians, it also boosts the economy. Every time we bring in new residents, they are living here while training. They are taking advantage of services, many of them with a hope of staying in area.”

The economics matter. Honts was recently installed as chairman of the Coachella Valley Economic Partnership, the nonprofit organization charged with attracting, retaining, and expanding business while also developing a workforce with skills aligned to its needs. He says CVEP’s greatest challenge “lies in transitioning the Coachella Valley into a year-around economy with a skilled workforce to create permanent middle-class jobs.”

In 2012, CVEP launched the Palm Springs iHub and Accelerator Campus, which offers space and services to technology-based start-up businesses, including innovators in medical technologies.

Joe Wallace, a one-time dot-commer with an engineering background, was recruited by CVEP from Ventura County as the iHub’s founding managing director. “On my first day on the job, I was told, ‘Here’s what we want you to do: Find 50 companies to start up within [the] first five years,’ ” he recalls. “They had not looked at other places, like San Jose and Cleveland, to see what they had done. Somebody came up with [the] marketing slogan ‘50 in Five.’ And that became the go-to. And here we are, four-and-half years in, and we have 44 new companies. I would say ‘50 in Five’ is a high probability.”

The Palm Springs iHub’s Health & Medical Innovation Center, which opened in summer 2014 on the Accelerator Campus, hosts a variety of firms, including Priatus, a medical device company that designs medical and lab ware, and GattaCo, whose proprietary disposable device extracts blood through, or from, membranes either passively or automatically. “The device separates whole plasma out of blood without having to use an intravenous needle,” Wallace explains. “You do not need a phlebotomist. It reduces the costs of testing plasma dramatically, from about $100 to a dollar or two.” An international patent is pending; the process would obviate what’s known as “the breakthrough pressure” associated with hydrophilic membranes, pads, and even filters. The technology is called CPR, or capillary pressure reset. 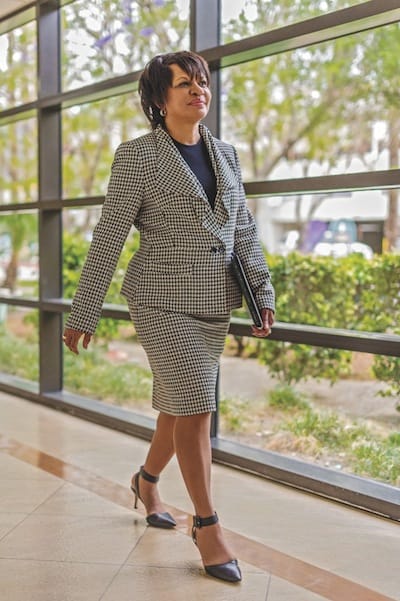 GattaCo President Michael McNeely received his bioengineering degree at University of Utah and launched the company in Singapore in 2004. He moved it to Palm Springs from Murrieta because the iHub accommodated its need for a cleanroom facility. “CVEP provided an opportunity for me when I was stuck,” McNeely says. “The biotech landscape is littered with unfulfilled promises, failed technologies, and dead unicorns. Validating the technology here will lead to improved partnering and investment opportunities.”

He expects to be able to sufficiently demonstrate GattaCo’s technology by the end of the year. “My main goal after that is to grow the company and qualify for relevant grants and corporate collaborations,” he adds.

If GattaCo is successful, it could spark interest among other innovating entrepreneurs to head to the valley. “I have already encouraged others to look at the opportunities here, and will continue to do so,” he said.

That’s how Nellie Coffman grew her market, and eventually an industry. 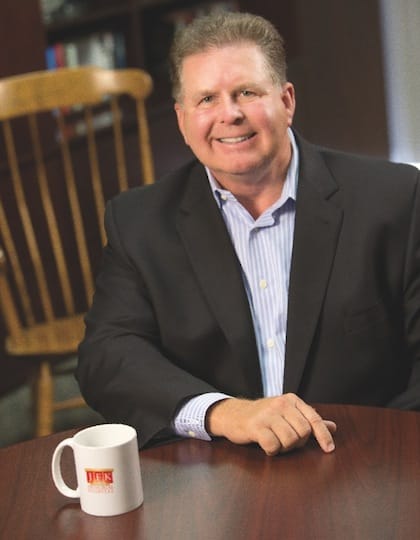 PHOTO BY ETHAN KAMINSKY
“The Coachella Valley is a natural destination for elective procedures because of the high quality of care,” says Gary Honts, CEO, JFK Memorial Hospital. “Healthcare continues to evolve to a more outpatient-driven industry.”