Devon and Gabe tie the knot at the Ace Hotel and Swim Club in Palm Springs.
PHOTOGRAPH BY MATHEW DAVID STUDIO

From a freestyle first dance to a surprise final toast with actual toast tossed at the happy couple, à la The Rocky Horror Picture Show (which these Angelenos screened together the day they met), Devon and Gabe infused fun-loving quirks into every facet of their celebrations.

“Gabe led the way on aesthetics, and I managed the budget,” says Devon, a film and television writer who flipped the script and asked Gabe, a muralist, to marry her while the pair were traveling in Europe. The couple designed Devon’s ring together, and when it arrived early, Gabe surprised her with a second proposal at the end of a hike near their home.

After a yearlong pandemic-induced postponement: “We did everything exactly how we wanted,” Devon says. “For me, that meant not fussing a lot over details; I just wanted to show up and have a good time!” 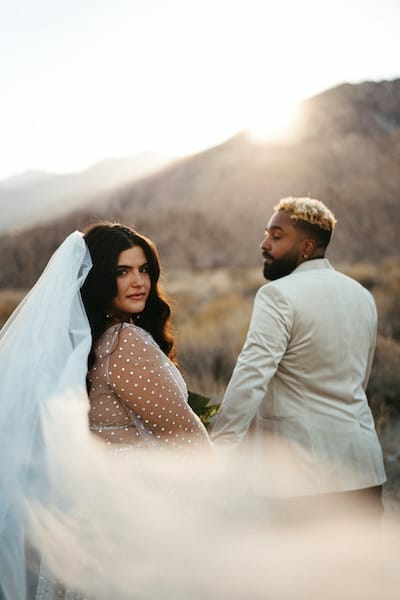 “All the little bits and bobs don’t matter. It’s a celebration, so whatever that means to you, make that happen!” 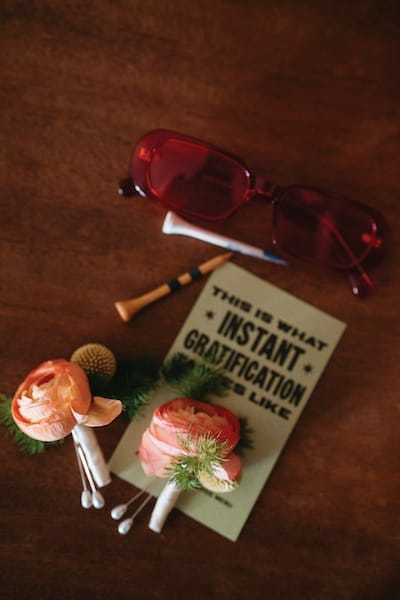 They invited 40 of their favorite people to the Ace Hotel & Swim Club in Palm Springs for a poolside ceremony and laid-back alfresco dinner reception with a vegan menu. For dessert? Gabe’s favorite pineapple upside down cake.

Minimal and modern floral touches by Luna Design Studio, like single palm leaves and ranunculus buds as centerpieces, played well with earthy tones that let the party and the people take center stage. The dance floor thumped all night and included a group rendition of “The Super Bowl Shuffle” with Gabe’s father, the mastermind behind the iconic 1985 music video, Chicago Bears wide receiver Willie Gault.

A mini-moon at L’Horizon Resort & Spa in Palm Springs was the perfect ending to this intimate evening fêting the creative eccentricities that made these two fall in love.

• READ NEXT: Couple Share Love for the Desert With Guests at Joshua Tree Wedding.