Adam Lerner on taking over the Palm Springs Art Museum, which was closed for 14 months and cut its budget from $11.5 million to $7 million. "I'm walking into this with eyes wide open and I know that it's not going to be easy."
PHOTOGRAPHS COURTESY "FROM THE HIP PHOTO"

A refreshing optimism is coursing through the Palm Springs Art Museum following its announcement Wednesday that its new CEO and executive director will start on July 15.

The past several months have been particularly tough for the institution. Its chairman, Steve Maloney, died in March, followed by the resignation of the previous CEO and executive director, Louis Grachos, and a board shakeup that saw philanthropist Harold Matzner abdicate his longtime executive vice chairmanship. Add the controversial deaccession of a Helen Frankenthaler painting, the unraveling of a few popular programs, and a global pandemic that halved the museum’s operating budget, gutted its staff, and shuttered its Palm Desert exhibition space and you wonder who can right this ship.

The answer is Adam Lerner, the creative and wonderfully unorthodox former director and “chief animator” of the Museum of Contemporary Art Denver. The appointment marks not only a new beginning for Palm Springs Art Museum but also — if the new boss has his way — for the entire Coachella Valley.

“I have the sense that the city and the region are at an inflection point, that it’s about to become what is going to be in its next chapter,” Lerner says from his home in Colorado. “I am interested in the opportunity, through the museum, to influence how Palm Springs and the Coachella Valley evolve as a region.”

Lerner, 54, has an affinity for Palm Springs. He’s been visiting since he moved to the West 20 years ago, following his curatorial position at the Contemporary Museum, Baltimore. “I just love the place,” he says. “I was [in Palm Springs] twice in the past two months — once for Desert X and another for the heat, to sit by the pool. For me, that pretty much says it. I like the vibe. There’s some magic about the valley that I love and have always been attracted to.”

His dreamy honeymoon will be short, however, and he knows it.

The pandemic was devastating for the museum, which was closed for 14 months, forcing it to cut its budget from $11.5 million to about $7 million. Moreover, with an aging donor base, Lerner will need to attract new support.

“I’m walking into this with eyes wide open and I know that it’s not going to be easy,” he says. “I’m taking over a museum that needs to be built and, to be honest, I feel confident that I’m the person who can do that.” 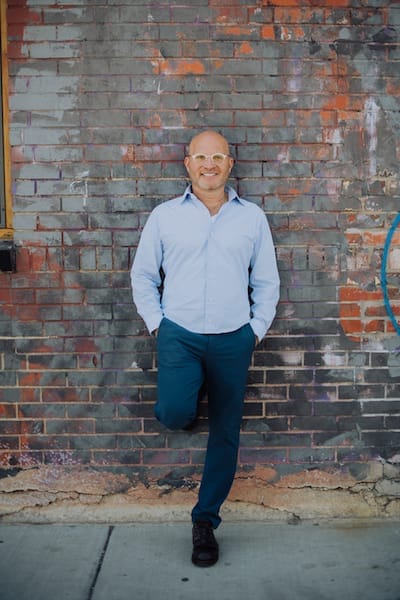 Museums around the country often seek his advice and mimic his programming.

Lerner’s confidence stems from his mighty 10-year tenure at MCA Denver, where he grew attendance to record numbers, erased $10 million in debt, created an endowment, and infused life, color, and fun into the institution and the city.

In Palm Springs, he says, “My first task is to understand the current donor pool’s capacity to support the museum and then to identify the opportunities for increasing revenue in the short, medium, and long term. For me, fundraising is a long game: You figure out an appropriate strategy for the short term while building relationships with the people who are interested in investing in the future of the region.”

Lerner has the challenge of mining the recent influx of newcomers to the desert — many from L.A. and the Bay area — who are younger, still working, and creating wealth. “That’s my experience, working with the new economy class of donors,” he says. “As they amass their wealth and feel like they want to be a part of what’s exciting in their city, the museum will be, hopefully, one of the exciting things for them.”

Fortunately, “exciting” is practically Lerner’s brand. He has a knack for attracting audiences and making connections where they might seem improbable. For instance, his signature program in Denver, Mixed Taste: Tag-Team Lectures on Unrelated Topics, paired experts discussing a variety of unrelated topics.

Museums around the country often seek his advice and mimic his programming. In 2017, the Andrew W. Mellon Foundation awarded MCA Denver with a $400,000 grant to train arts professionals on its innovative practices.

“I am asking, ‘What does this place need?’ and ‘How can this institution be a platform for creating the kind of energies that this place wants?’” he says. “If that means pushing beyond the traditional role that a museum has played, then I’m perfectly happy to do that.”

Lerner also wants to embrace the diverse segments of the local population, especially the large Mexican community in the East Valley and Native American people from the area’s nine tribes.

The key, he says, is to build trust. “The starting point is connecting with leaders in various communities who might not be a part of, or see themselves as part of, the museum currently. Then you start to understand how different communities feel about the museum and what they want of their museum. If those things are not a part of the definition of what an art museum does, then it’s a good time and a good reason to explore expanding the definition to be relevant to those audiences.”

That relevance manifests in programming, which Lerner sees as a way to communicate what the museum stands for and to make it a part of people’s daily life. “Most museums will say, ‘We’ve got this great exhibition. Come and see it.’ I’m interested in saying, ‘What do you do on your weekends? Because we have a way for you to spend your Sunday mornings that will be enriching and enjoyable, and we can become a part of what you think about when you think about why you love living where you do.’ That also happens to be the strategy for reaching younger audiences.”

• READ NEXT: Etherea Finds Permanent Roots in the Desert After Coachella Festival.