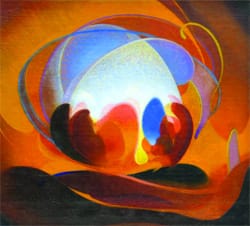 If Agnes Pelton had met an influential man like Alfred Steiglitz, if she had been self-promoting rather than reclusive, if she had moved to New Mexico instead of Cathedral City, we’d all know her name. As it is, only serious students of California art are likely to recognize the name of this desert painter so often compared by art critics to Georgia O’Keeffe.

The lives of the two artists ran in synch. The similarities are explored in a book published by the Palm Springs Art Museum in 1995: Agnes Pelton: Poet of Nature.

Born six years apart, O’Keeffe (born 1887) and Pelton (born 1881) both studied with Arthur Wesley Dow in New York. They both looked to nature for inspiration and went a step further — seeking to capture the forces behind the natural world. Both first came to the desert at the invitation of Mabel Dodge Luhan, Taos’ famous patron of the arts.

While she sometimes seemed to be on the run from success, Pelton was actually running toward something: a profound understanding of her own life, the landscape, and the cosmos.

She dived deep into her paintings, starting with geography. “To paint a landscape well, first lay bare its geological layers,” she wrote. As she contemplated Mt. San Jacinto, Edom Hill, a sandstorm, or a smoke tree, she always sought the animating energy that moves stars, sand dunes, and light.

She painted standard desert landscapes to make a living, but her true calling was abstract studies of the land and light, ecstatic paintings full of auras, plumes, and glowing orbs. “She was ahead of her time in her conception of spirituality, life’s purpose, and the visual representation of it all,” says Pelton scholar Nancy Strow Sheley.

Born to American parents in Stuttgart, Germany, Pelton began experimenting with abstraction in the early 1900s in New York. Her work appeared in the Armory Show of 1913, a watershed for modern art. Intentionally moving away from the mainstream arts community, she settled in a green cabin in Cathedral City — population about 100 — in 1932 and later bought a house at 677 E. St.

A believer in numerology, astrology, and faith healing, Pelton would be familiar to us today as the sort of fervent seeker you might meet in yoga class or meditating on a boulder in Tahquitz Canyon. The English Romantic poets Shelley and Wordsworth, as well as Krishnamurti, and Agni yoga (a school of yoga that emphasizes spiritual fire) were her greatest influences.

For her 60th birthday in 1941, she bought a cabin on Thomas Mountain in the San Jacintos.

When she died at home in Cathedral City in 1961, she left an unfinished painting — Light Center — that expressed her conclusion after decades of seeking: “Life is really all light, you know.”