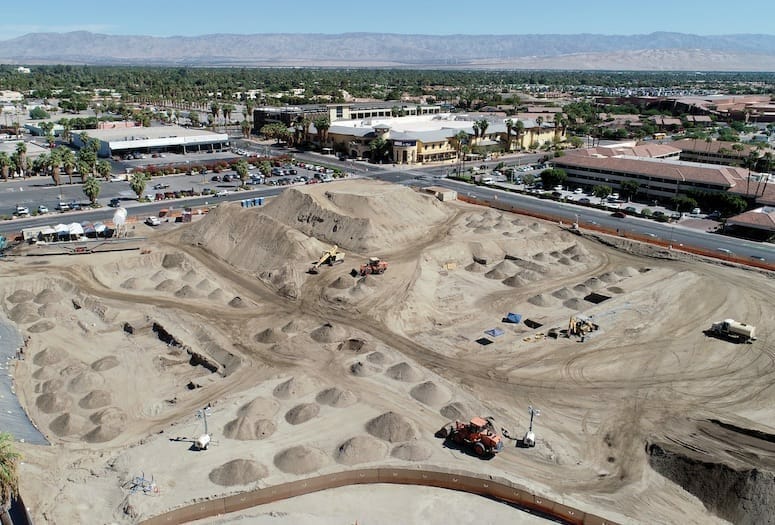 For the Agua Caliente Band of Cahuilla Indians, home is literally where the hearth is.

Near the intersection of North Indian Canyon Drive and Tahquitz Canyon Way in downtown Palm Springs, California, lies the crux of Agua Caliente cosmology and life: an ancient spring that funnels 12,000-year-old water from a depth of 8,000 feet to the surface. Historically, the Agua Caliente Hot Mineral Spring provided the Agua Caliente people with water for drinking, cooking, bathing, and irrigating while also taking on an intangible presence as a healing, sentient being known as Séc-he. Today, the spring remains an integral part of Agua Caliente cultural heritage and identity. 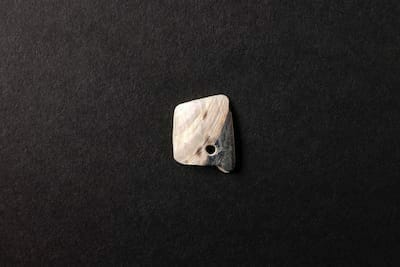 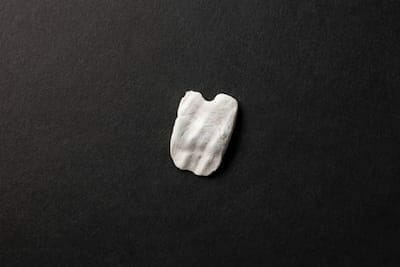 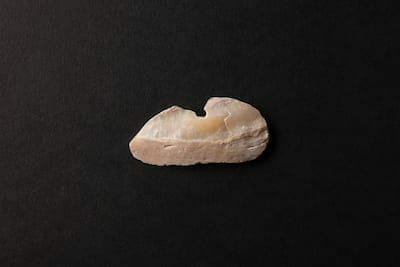 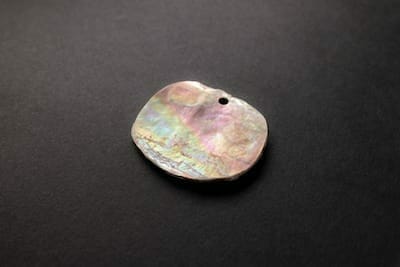 Yet other than historical aerials dating to the 1940s and late ’30s and Tribal oral traditions, the ethnographic record for this sacred site has remained sparse, with archaeologists able to piece together only part of the Séc-he story. They’ve known, for instance, that the spring once appeared as a large pool surrounded by green foliage, palm trees, birds, and other small creatures. After the establishment of the Agua Caliente Indian Reservation in 1876 and 1877, the Tribe engaged in a series of land leases at the site, leading to the development of several bathhouses over the years, including the renowned Spa Hotel in 1963. As a result, archaeological features or artifacts at the surface and below the surface — plus any cultural context — were believed to have been demolished.

However, an unexpected discovery during construction of the Agua Caliente Cultural Plaza changed everything known about the sacred site. 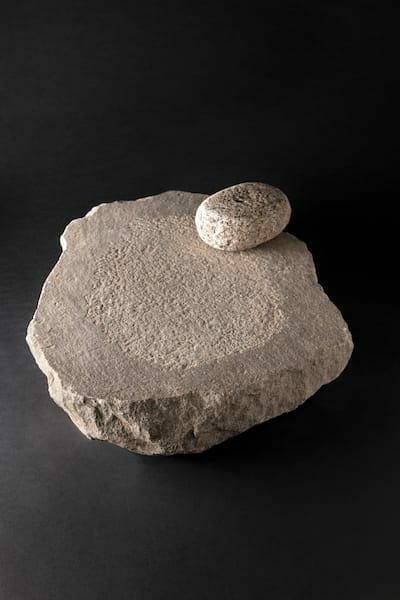 A mano and metate were found as a pair.

The Tribe broke ground on the Cultural Plaza on May 11, 2018. From the beginning of the construction process, cultural monitors from the Agua Caliente Historic Preservation Office were stationed at the site to observe construction activities, recover artifacts and ensure that, if there were any remaining cultural resources that had not been impacted by previous development, could be identified, immediately. Anytime construction activity picked up and moved dirt, a cultural monitor examined the freshly turned ground for anomalies, artifacts — anything out of the ordinary.

On July 3, 2018, a little less than two months into construction, a cultural monitor saw something. Some would describe it as a darkened stain in the soil. Others might say it was more of an ash smear with what appeared to be stone objects and bone fragments lining the inside of freshly uncovered earth. Regardless, it was an anomaly. Then Luis Rodriguez, another cultural monitor identified a similar feature 20 yards away. Roman Dominguez and Rodriguez contacted their supervisor, Hannah Feeney, Agua Caliente’s Cultural Resources Supervisor.

Feeney gathered all of the information from the monitors and immediately contacted Patricia Garcia, the Tribe’s Director of Historic Preservation and designated Tribal Historic Preservation Officer, about the findings. “We started shovel test pits and shovel scrapes to start to investigate what we actually had there,” Garcia says. “We had to know, ‘Was it just a very shallow deposit or was it the beginning of something bigger?’”

After initial examination it was obvious the find required further investigation. Garcia contacted Scott Kremkau, principal investigator with Statistical Research Inc. (SRI) out of Redlands. She asked him to come out and look at the site, specifically the stained “charcoal lenses,” or possible hearths, Dominguez and Rodriguez had discovered. “I think there were four or five [hearths] that were visible,” Kremkau recalls. “So we looked at that and we determined that there may be an intact archaeological site that was deeply buried.” 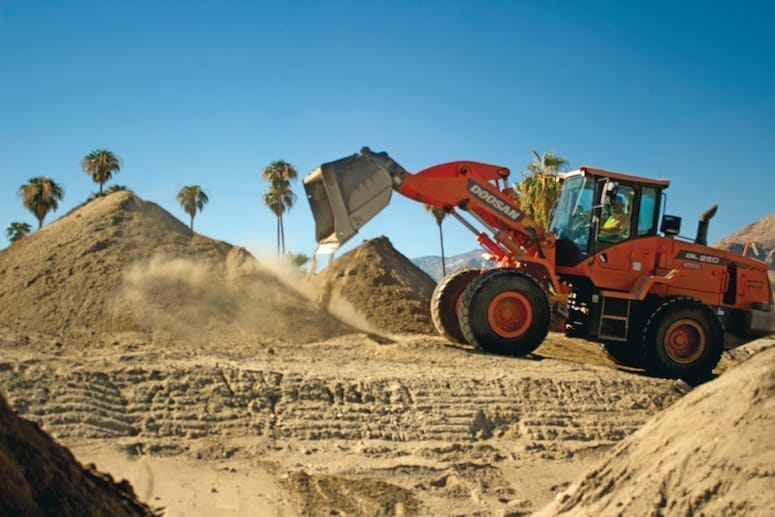 Test excavations during the initial exploration were set up at the site.

Initially, the team dug a series of test excavation units, 1-by-1 meter each, as well as some mechanical test trenches to see how deep the site was and where it was: Did it extend everywhere or just in certain parts? Through those test excavation units and the test trenching, they found that the archaeological deposit was about 3 to 4 feet thick and located throughout most of the parcel, construction then came to a halt. 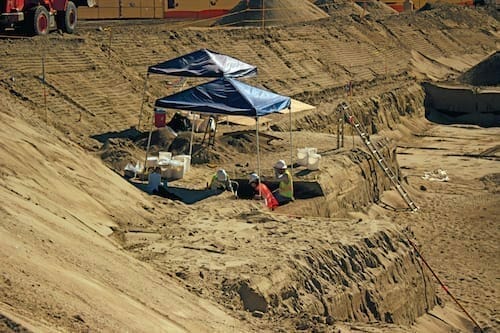 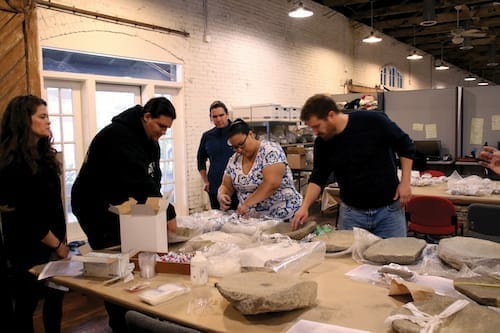 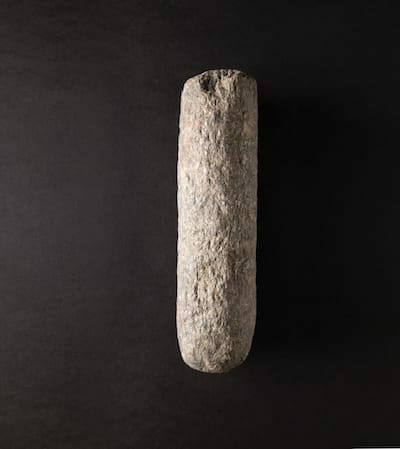 A pestle recovered from the site would have been used to process plant foods.
Considering all the available information, Garcia drafted a proposal for a comprehensive investigation of the area, which was submitted to the Agua Caliente Tribal Council for approval. What followed was a series of investigative “phases,” with the Council ultimately moving forward with a large-scale mechanical excavation to recover 100 percent of the site.

Along with Dominguez and Rodriguez, monitors Larry Holleman, Jesse Sandoval, William “Bam” Beyal, Todd Perry, Agua Caliente Archaeologist Lacy Padilla, along with Tribal members Savana Saubel, John Preckwinkle, Briannna Duran, Marisa Ruiz, Kelly Teel, and Council Member Anthony Purnel, worked with SRI on the excavation and data recovery. Katie Croft, Agua Caliente’s Cultural Resources Manager in the Historic Preservation Office, utilized a GIS mapping program to create a 3-D model of the project site that was used to inform which areas would require excavation. Under Garcia’s direction, SRI conducted a mass excavation using modified construction equipment to excavate 4-by-4 meter units. Standard excavation units are only 1-by-1 meter square also known as a “unit” or “excavation unit.” The approach of mass excavation would save precious time and recover as much cultural material as possible, delaying the project for months instead of one or more years.

“All of the soil that was recovered or pulled from each 4-by-4-meter unit was then put into piles to dry because the area is wet from the spring,” Garcia explains. “We had dozens and dozens of piles drying.” Once dried, the soil was passed through a large screening machine, which was fitted with an archaeological appropriate sized screen of 1/8 inch to recover small objects like shell beads. Archaeologists caught all the artifacts that traveled down the conveyor belt with a wheelbarrow before wheeling it to a wet station. There they “wet-screened” using water to wash away any remaining clumps of sediment. The washed gravel and artifacts were then transferred into screens to dry and be hand-sorted, when all the items were pulled out by a cultural monitor or one of many Tribal members who volunteered to help recover artifacts on their ancestral land. As a result of the discovery, Tribal members Kelly Teel, Brianna Duran, Jeremey Cummings, Michael Pete, Angela Hernandez, Joseph Duran, Cierra Teel, Cyrus Cunningham, and Gardenia Gonzales now work as monitors in the Historic Preservation Office. 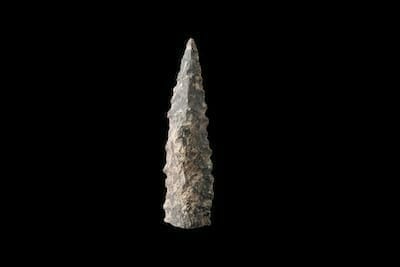 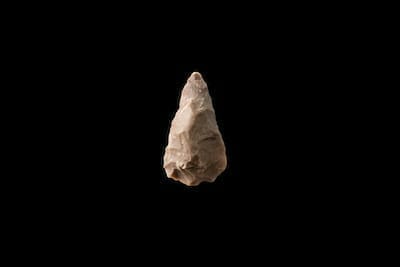 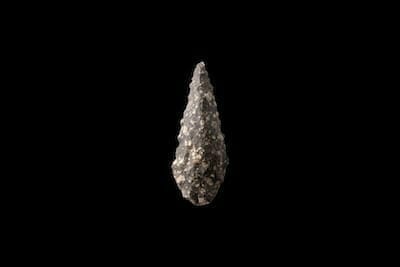 Spear and projectile points retrieved from the site are associated with the early occupation.
When the fieldwork finally wrapped up in mid-November 2018 — four and a half months later — Kremkau and his team at SRI conducted additional inventory, analysis and other lab work that needed to be done. What was recovered during the excavation took everyone by surprise. 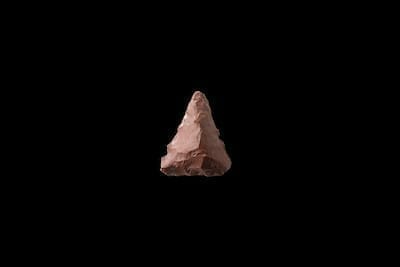 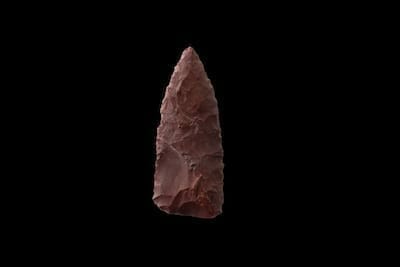 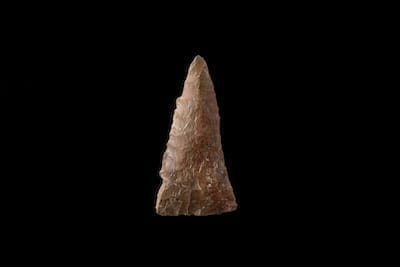 Tribal historic preservation office staff members, cultural monitors, SRI archaeologists, and Tribal member volunteers recovered hundreds of artifacts during the first several weeks of the excavation: metates, manos, shell beads, metal objects, wooden objects. They also unearthed approximately 126 features, most of which were hearths — what the cultural monitors discovered that day in early July, when the entire investigation was set in motion. 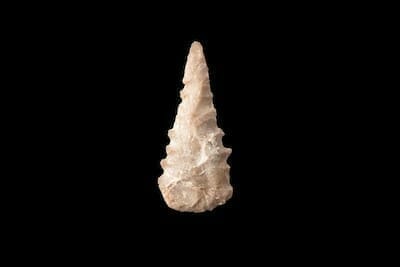 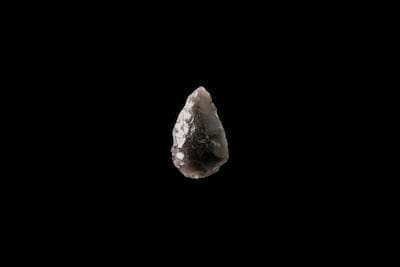 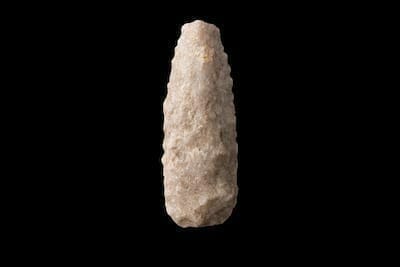 “We knew that the site was probably pretty old because there weren’t any ceramics there, which didn’t appear in that part of the Coachella Valley until about 1,000 years ago.”

Kremkau’s team used samples from two of the hearths as the first radiocarbon dates. “When we got those first two dates back, we were just blown away,” he says. “We knew that the site was probably pretty old because there weren’t any ceramics there, which didn’t appear in that part of the Coachella Valley until about 1,000 years ago.” 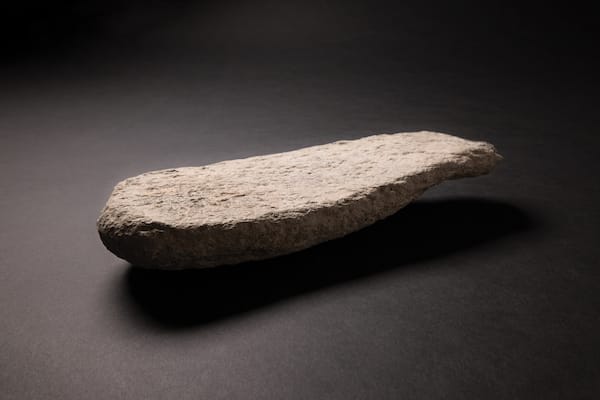 An unusual ground stone implement, ...
But no one was expecting the site to date back anywhere from 7,700 to 8,200 years — several thousand years older than the oldest known site in the valley, which, Kremkau says, researchers estimate to be around 3,000 years old and near present-day Indio.
Though they have been buried more than 10 feet beneath he surface for millennia, these hearths still have stories to tell. Through a macrobotanical analysis of the charcoal, ashes, and faunal (animal) bones that remained in these thermal cooking features, Kremkau and his team can determine if there are seeds and other plant materials in the soil, which then reveals what kinds of vegetation (i.e., desert or mountain), wildlife, and even firewood the Agua Caliente were using — like a window into the past. 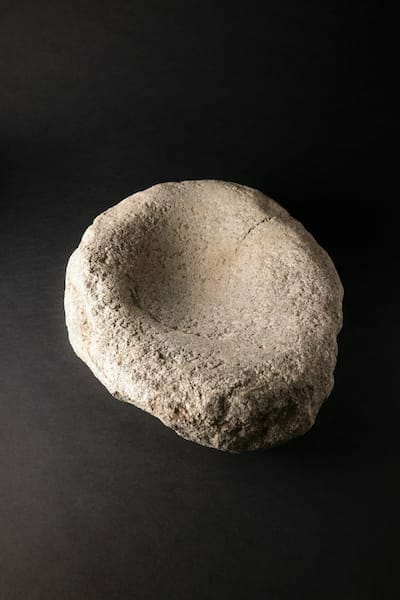 ...and a mortar were recovered. 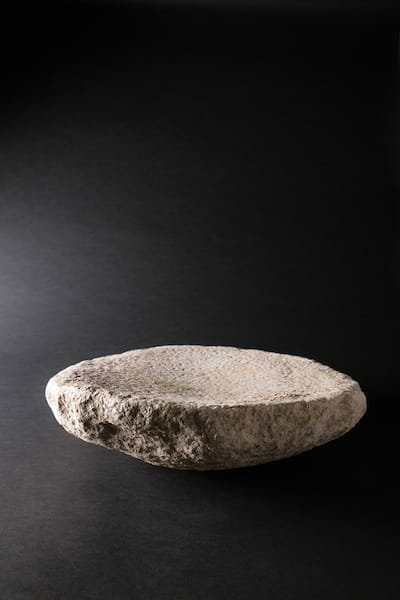 A metate recovered from the site.
Then there’s the task of piecing together more of the Tribe’s trade history: which materials were trade items and which were gathered locally during what Kremkau calls the “seasonal round,” when people relocated to different parts of the traditional use area throughout the year depending on when different resources were available. Shell beads discovered at the site, for instance, likely passed through Agua Caliente hands from either the Pacific or Gulf coasts, while obsidian may have originated from as far away as Napa Valley or Flagstaff, Arizona. 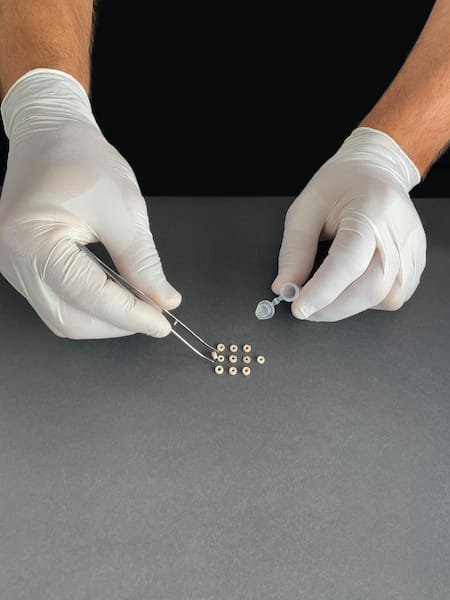 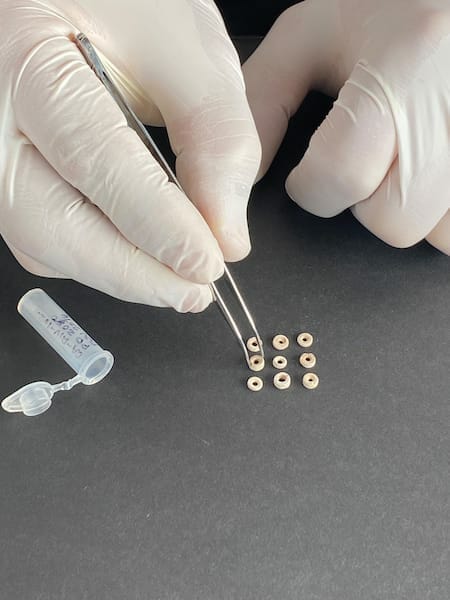 Many of the artifacts uncovered at the site appear within the Agua Caliente Cultural Museum’s permanent exhibition, a fitting finale to the cultural journey visitors experience as they move throughout the gallery space; though the objects represent such a new and exciting part of the Agua Caliente people’s story that has remained buried for far too long, they continue to shape so much of what we know about the Tribe in the present. Ultimately, Garcia says, it’s the tangible, scientific research SRI has gathered combined with “the intangible and cultural knowledge of the Tribe” that will help provide a comprehensive picture of all that Séc-he was and is. 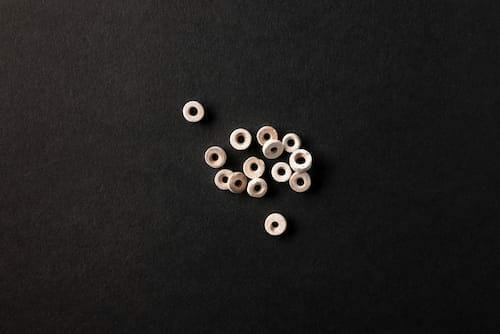 Feature
Any physical structure or element, such as a wall, post hole, pit, or floor, that is made or altered by humans but (unlike an artifact) is
not portable and cannot be removed from a site. Examples found at the site of the Agua Caliente Cultural Plaza include the charcoal lenses, or hearths.

Artifact
A portable object manufactured, modified, or used by humans. Examples of such items found at the site of the Agua Caliente Cultural Plaza include projectile points, shell beads, and ground tools.

Radiocarbon dating
An absolute dating technique used to determine the age of organic materials less than 50,000 years old. Age is determined by examining the loss of the unstable carbon-14 isotope, which is absorbed by all living organisms during their lifespan. The rate of decay of this unstable isotope after the organism has died is assumed to be constant and is measured in half-lives of 5,730 plus 40 years, meaning that the amount of carbon-14 is reduced to half the amount after about 5,730 years.

Test pit
An excavation unit used in the initial investigation of a site or area, before large-scale excavation begins, that allows the archaeologist to “preview” what lies under the ground.

Trench
Term sometimes used to refer to an excavation unit when the length is longer than the width. Trenches are typically placed at intervals across a site to conduct a quick evaluation of a large area.

Source: The Archaeological Institute of America

This article appears in the Fall/Winter 2021-2022 edition of Me Yah Whae, a publication of the Agua Caliente Band of Cahuilla Indians. To view the digital edition, click HERE.