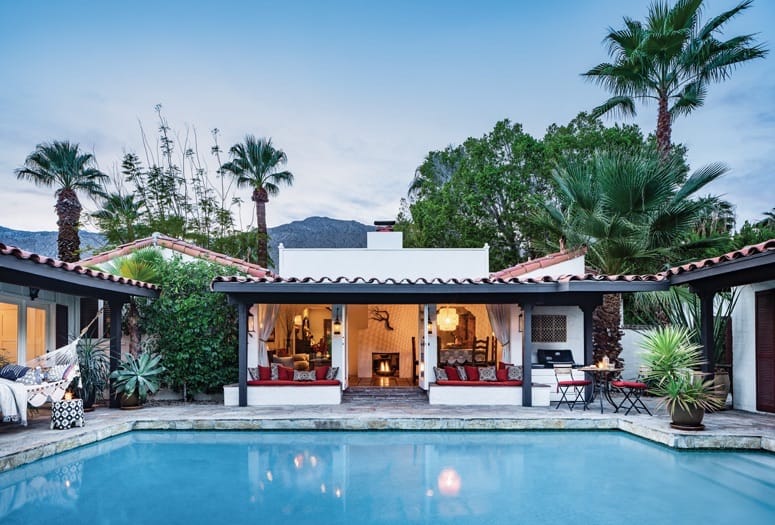 Drew and Lucienne Blake are one of those couples that seem to float through life on a romantic cloud of great taste and good fortune. They lived on separate coasts, met by chance on a beach at The Montage, and eloped in Big Sur. He’s an architect with legit construction skills, while she’s a gifted stylist. Even their names, Drew and Lu, hint at an advanced level of kismet and a blessing from the stars. They’re precisely the kind of people who would negotiate a sweet deal on a charming but rather nondescript 1940s home only to uncover tangible proof that a famous architect designed it. And that’s exactly what happened.

They found their four-bedroom Palm Springs bungalow on a quiet side street with palm trees dotted down the center. From this short rustic avenue, purportedly developed by early desert pioneer Pearl McManus as a horseback-riding trail, passersby see only a pair of wooden double doors tucked into a tall bougainvillea hedge. It’s the same hedge the pair peeked over — standing on the seats of their bicycles borrowed from the Ace Hotel & Swim Club — because Drew insisted they check out the listing he had seen on Zillow. When that Spanish adobe they couldn’t stop thinking about dropped in price the following year, and the sellers were eager to accept a lowball offer, the couple closed. It was just before New Year’s Eve 2010.

The enchanting property reveals itself coyly, like a shy schoolgirl with her first love. A broad front courtyard welcomes with a tiered fountain and conversation areas. Inside, wood beams, stone walls, and an original double-sided fireplace bring warmth to modest-sized rooms. The snug intimacy that characterized many homes of the era remains in full effect. Set close around the pool on three sides, thecompact compound is as cozy as they come. 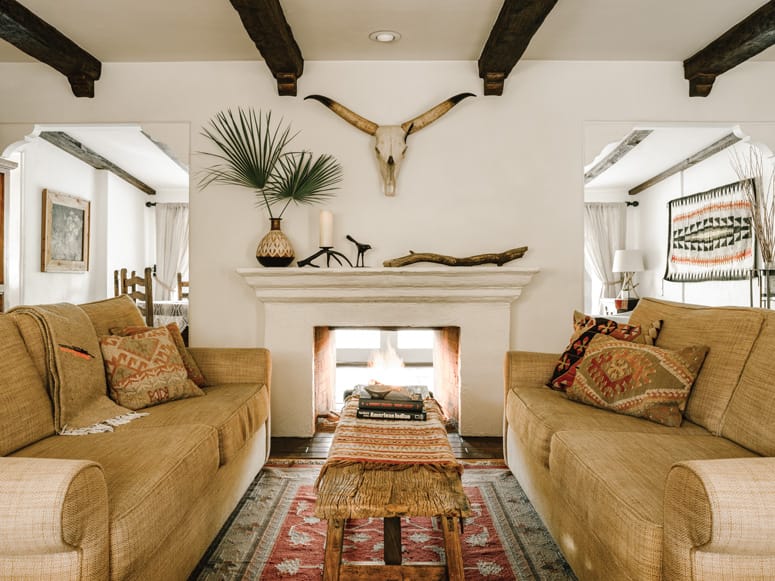 A double-sided fireplace warms the living room and the reading room behind it. 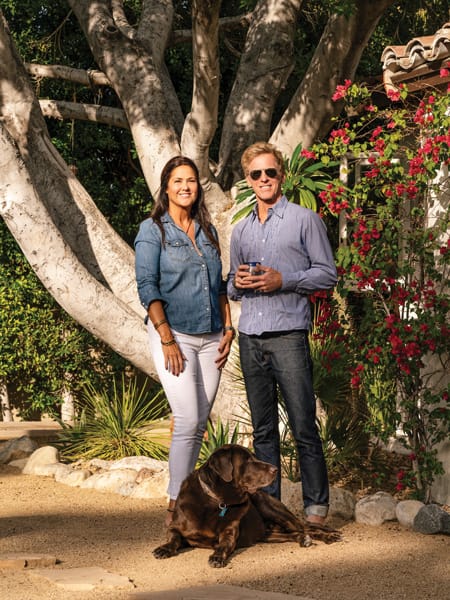 Lu and Drew Blake with their dog, Moose. 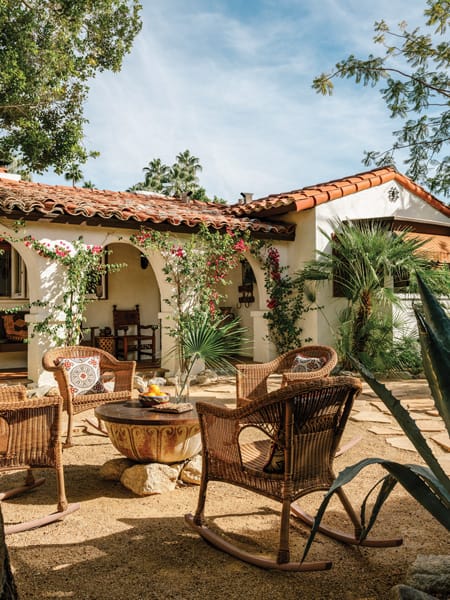 Wicker rockers complete this front courtyard conversation area. “We love to pass through the wood gates from the street and feel a true sense of calm and privacy here,” Lu says.

Across the front, dense vegetation serves as a buffer against the few cars that might drive by over the course of a day. For those who close the wooden doors behind them, the home provides a taste of a slower, stiller life — the kind we imagine must have existed when the first adobe bricks were laid.

“This is what we were searching for,” Lu says. “A place we could dig into and have our privacy and just sort of live inward.”

The sellers had left the home filled with belongings, which is how Drew stumbled upon the original plans, pushed into the back of a cupboard in the dining room. The folded set of dark blue papers covered in white lines were flaking around the edges when he opened them. “In the bottom-right corner, I saw the stamp of Albert Frey, and I started shouting, ‘Lu! Lu! Come in here! You’re not going to believe this!’ ” he says. “I follow him as an architect so to find those blueprints was like Christmas morning. It also made me feel a little more secure that I hadn’t just done something crazy. Like this house was meant to be.” (He has recently decided to donate the plans to the Palm Springs Art Museum Architecture and Design Center for safekeeping and preservation.) 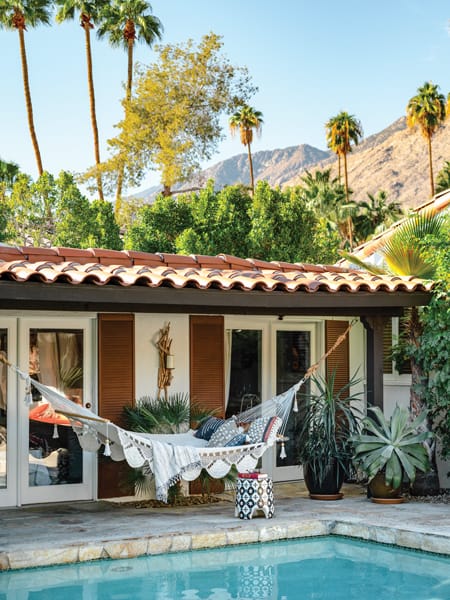 Though the patio is fairly narrow, it provides everything they need: a hammock for napping, a side table for a book, and fireside seating. 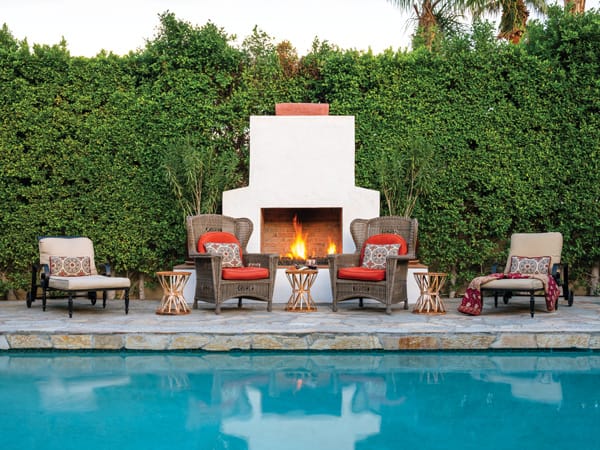 The Blakes replaced the cracking concrete that surrounded the pool with stone that dips down to almost touch the water.

“This is what we were searching for — a place we could dig into and have our privacy and just sort of live inward.”

The untold tale of how a Spanish hacienda came to be designed by one of the founding fathers of modernism would have a thicker plotline if Frey were still among us to fill in the details. Why this style? Why 1946? Placed on his career timeline with work concentrated in the 1940s–60s, this architectural one-off sits between the Movie Colony Hotel (1935) and Palm Springs City Hall (1957). Were there others in this style? And how many? Was it work he enjoyed, a favor for a friend, a passing fancy for red tile and plastered walls, or designed on a whim to win a bet? A year after Frey built the Blakes’ home, he completed the minimal and ultra-modern Raymond Loewy House.

The home is more than an unexpected autograph, of course. Lu based the décor on Palm Springs’ own Korakia Pensione, where they spent several anniversary weekends.  Built in 1924 and expanded in the ’30s, the hotel’s soft-white villas, layered with Mediterranean and Moroccan flair, were a natural muse. “We weren’t imposing our aesthetic on it so much as it told us what to do,” she says. “We were just listening to the house.” Pieces collected from flea markets, vintage stores, and personal travels evolved the spaces over time, just as the home itself has evolved.

A man who lived in the house with his parents during the 1960s dropped by one day when he was in the neighborhood and pointed out which elements had been there and which had been changed. The casita, he noted, had been their garage. And if the Blakes hadn’t heard, the man added, his mom had seen the signature of actor George Hamilton on the closing papers, and the agent had confided that indeed the buyer was Hamilton. “So I think he turned the garage into the casita,” Drew speculates. “If it really was him, he did a lot of work on it and made it more of a retreat. I’m sure that, coming from Hollywood, he would have wanted a nice big gate, a pool in the back, and a casita for his friends. But I still haven’t gotten full confirmation.” 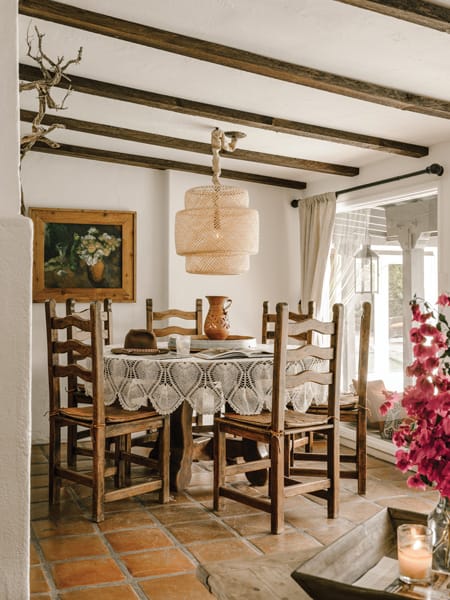 The couple’s favorite place to read in the morning over a cup of coffee is the big round dining table. They think this pool-view space was once an outdoor veranda. 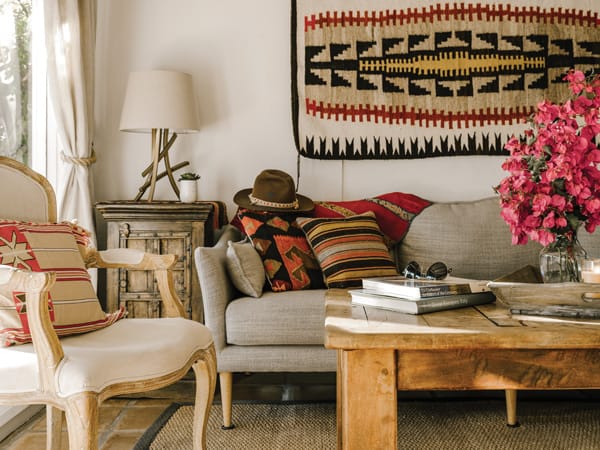 A sitting area in the reading room. 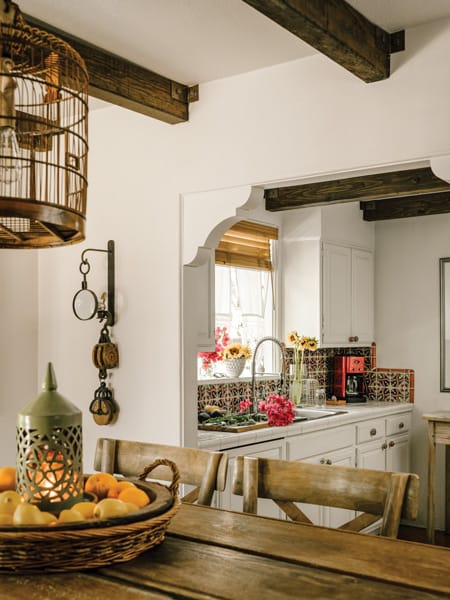 “When the sun comes through the palm trees it just lights up that room,” says Drew. The kitchen is Lu’s flower-arranging station.

“We weren’t imposing our aesthetic on it so much as it told us what to do. We were just listening to the house.”

Even fairy-tale dwellings have moments of strife. There was the infamous leak in the ceiling during a desert downpour, when the closing papers were on the table and ready to sign. There was the pool equipment they had to buy. Twice. (The saltwater in the pool deteriorated the first set.) They added air conditioning units and replaced the old concrete pool deck with stone. Eight years in, Drew still gets restless to fix things while Lu wants him to sit with her by the pool.

He can’t help himself; it’s in his genes. “My dad was an airline pilot. But when he wasn’t flying, he was building,” Drew says. “So my brothers and I grew up on his summer crews: digging ditches, or framing, or painting, or something. If we had to hire a handyman, we’d be broke. With an old house, there’s always some sprinkler or dimmer switch that isn’t working.” Every summer they tackle a big project, which sharing the house with rental guests helps them fund.

Usually, however, the house is reserved for fun, with the couple’s 12-year-old son, Hudson, grown daughters Kendall and Sydney, and their chocolate Lab, Moose. “We play ping pong. We have swimming races. We cook amazing meals, always with candles and flowers,” Lu says. The couple happily sacrificed their driveway for a bocce court. Now they park their cars outside and host parties on the sand with a 24-foot-long table. When guests arrived for Lu’s 50th birthday party and Thanksgiving Day, lanterns flickered from the ficus tree above. The latest chapter in this Spanish-style storybook? The couple’s close friends from Laguna bought the house across the street. Now they celebrate holidays together in the desert — because everyone needs a vacation from life at the beach. 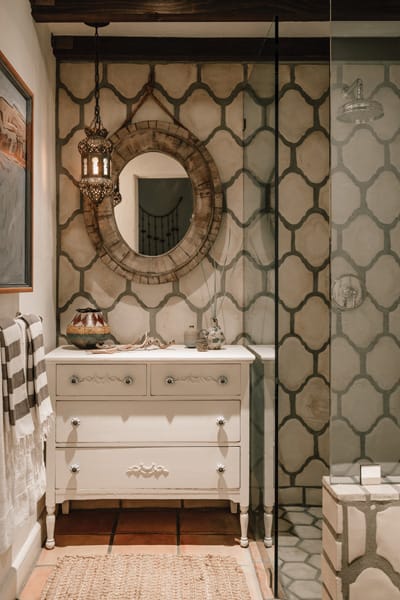 “A friend who works in the movie industry told us about a salvage yard where they go for film sets.” They found a winner and had it restored. 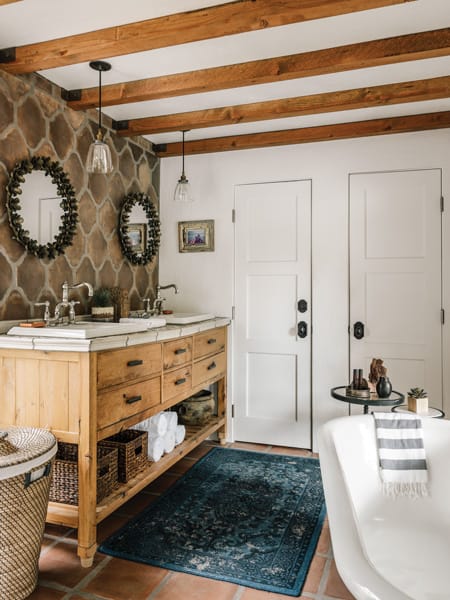 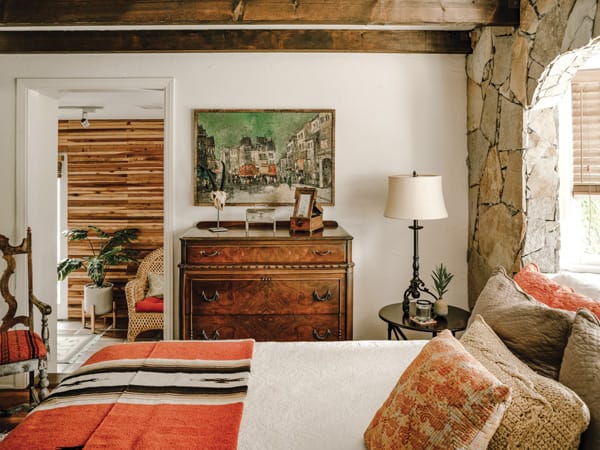 Wood, stone, and tile promote relaxation in the master suite and bathroom.