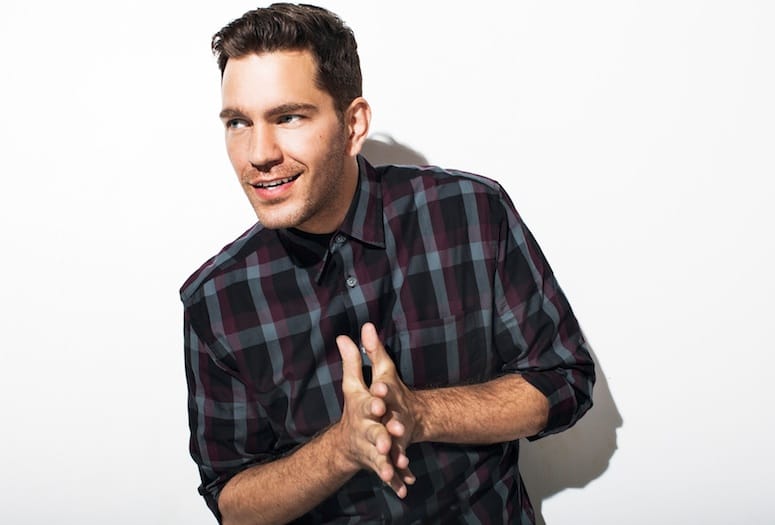 It plays out like the perfect rock ‘n’ roll fairy tale.

A young street musician gets discovered and signed by a record company, churns out a string of back-to-back hits and in a few short years he’s selling millions and performing on national TV.

Meet Andy Grammer, a rare specimen in today’s world of manufactured pop stars backed by small armies of songwriters and stylists. Grammer is the real deal, and his string of infectious hits fearlessly mix multiple genres in a way that gives his music a signature all its own.

Palm Springs Life caught up with Grammer in between flights and leading up to his Aug. 31 headlining performance at MIX 100.5’s upcoming Acoustic-Palooza concert at The Hard Rock Hotel Palm Springs. What lessons did you learn from performing for tourists on the streets of Santa Monica?
“ To get someone to stop, care and give you their attention and then actually buy your CD means you better really be good at your craft. You better have written a song that’s incredible. I kind of take that into every one of my shows. I need to give you something that’s really worth your time or you’re going to leave."

You’re selling millions of downloads, selling out shows and have music videos closing in on 10 million views. Of all of this success, what is the most validating for you as an artist?
“I’ll write 100 songs to get the 12 times that I feel like I hit something. It’s so hard to write something good, and when you click on something you can feel in your bones is good. That’s amazing and I’m addicted to that. I’m also addicted to when you feel a connection with the audience at the live show where you really are delivering what they need and giving people a break from their lives.”

What is the biggest challenge in writing pop music today?
“I think with writing pop music right now, and I can be guilty of it, is fear.  It’s like throwing in extra “oh’s” just because we’re worried (a heartfelt chuckle). Attention spans are so short that I feel like a lot of things have shifted to the lowest common denominator. If you’re writing for pop, you have to be consistently fighting that fear to get something truly creative."

What are your thoughts on the upcoming Hard Rock show and going back to your roots of playing solo acoustic?
“Solo is fun. It’s really important to be able to play solo, to able to just be with your guitar and everybody else, because that really sheds light on which songs are great. There’s also a whole different dynamic and you can get lost in a story in a middle of a song. It’s a lot more nimble as opposed to being with your full band with lights and production…that’s pretty hard to stop and make turns. It’s like the difference between driving a Mack truck and a motorbike…you can go wherever you want.”