Corn or Flour Tortillas? Arriola’s in Indio Has the Answer 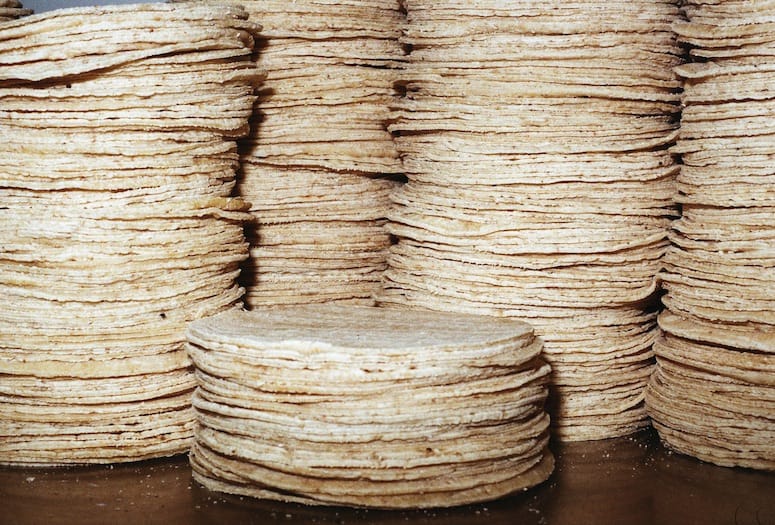 In New Mexico, there is an official state question: Red or green? It refers to the type of chiles you prefer with your meal. In California, we should have a similar question: corn or flour tortillas?

For any Californian, native or recently arrived, the question is a ubiquitous culinary mantra as familiar as “Do you want fries with that?” It’s also a password of sorts, and once answered, results in the appearance of a basket of crisp chips and a bowl of red salsa. Magically, the delivery of a suitable tequila-based cocktail soon follows.

According to Ian Townley, the fourth generation to work in his family’s Indio tortilleria, the preference is probably not as pronounced in the Coachella Valley because “American Mexican cuisine here is not what you’d find in a place like Oaxaca,” where preference for one grain over the other is often based on tradition, availability, and usage. (Ever tried to scoop up menudo with a flour tortilla?) Townley’s great grandparents, Herlindo and Eulalia Arriola, started making and selling tortillas out of their house in the downtown area around 1927. Many venerable Southern California tortillerias still operate in their original families’ hands. There’s Ramona’s (1954) in South Central L.A., Carrillo’s Tortilleria & Mexican Delicatessen (1943) in the San Fernando Valley, and Graciana Tortilla Factory (1937) in Sylmar.

But the oldest, continuous operation by a decade belongs to the Arriolas. When demand grew more than Eulalia could manage by hand, Herlindo bought an early tortilla-making machine that spit balls on a plate that were then pressed. Lacking sufficient electricity, Herlindo powered the machine by connecting a rope to the spinning wheel of a Ford Model T. The downtown area was often filled with immigrants who came for seasonal agricultural work, Townley says. With entire families at work in the fields and unable to hand-make one of the most essential components of the dinner table, the Durango-born Arriolas “saw there were no other tortillerias at the time. It was something they knew how to do.” 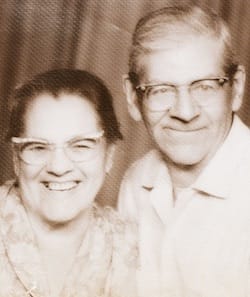 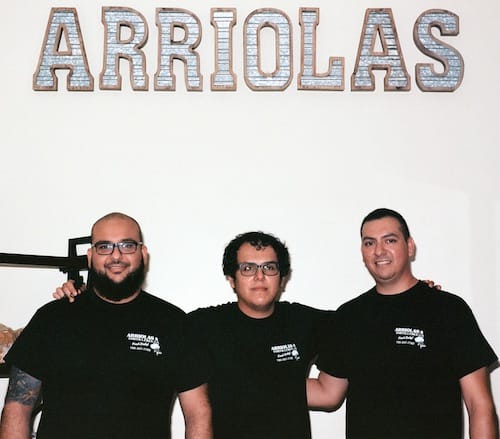 In fact, it is something that the vast majority of the Mesoamerican population has known how to do for about 10,000 years. The four cornerstones of pre-Columbian cuisine were beans, squash, chiles, and corn. The tiny ears of maize would barely be recognized as the corn of today, but for hundreds of years, the family cook would begin the process by nixtamalizing the corn kernels. This is a chemical process where slaked lime, a powder that when mixed with the dry kernels and water, creates what is commonly referred to as hominy. The skin of the hominy is then removed and the remaining kernels are ground into masa, a pliable corn dough that is rolled into small balls, then flattened and heated on a comal

t’s no doubt what Cortés or one of his other rapacious companions noticed when they first arrived in the New World. They dubbed the local staple “little cakes,” or tortillas (tortillas in Spain are an entirely different menu item) and it was not long before the conquistadors and the Old World colonists insisted that their little cakes be made with flour. The tortilla would have been familiar to anyone from Spain to India where flatbreads (pita, naan, bannock, lavash, chapati, etc.), a simple mixture of flour and water, were staples in almost every diet. But among the many other prejudices the Spanish brought to the Americas was the belief that the grains you consumed reflected a higher socioeconomic status. 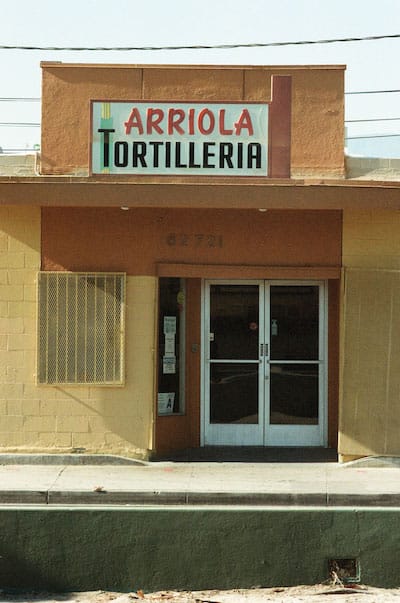 Hence, consumers of white flour were at the top of the human food chain, while those who ate lesser grains and legumes were the lowest of the low. Until the late 18th century, New World staples like potatoes and corn were reserved for prisoners or farm animals.

There is a delicious irony in that it turns out that corn tortillas are actually much healthier than flour. Because the flour isn’t leavened, the tortilla needs a binder to give it the pliability necessary for it to do its duty as a scooper and wrapper. The most common additive is lard. Nutritionists will scoff and point out that it’s really a miniscule amount of lard that goes into each tortilla. True, but if your diet consists of a dozen flour tortillas per day, seven days a week, 365 days a year … that’s a lot of pork fat. On the other hand, because of the chemical interaction between slaked lime and maize, the binder created gives the corn tortilla a natural pliability and, some would argue, superior strength as a scooper upper. Added to that, it has been found that this chemical interaction also results in a significant dose of niacin, a vitamin that has been linked to a number of health benefits, including lowering blood pressure.

The tortilla is made by curing maize in limewater (nixtamalization) before grinding, cooking, and kneading it into a dough to be pressed and cooked on a hot comal. 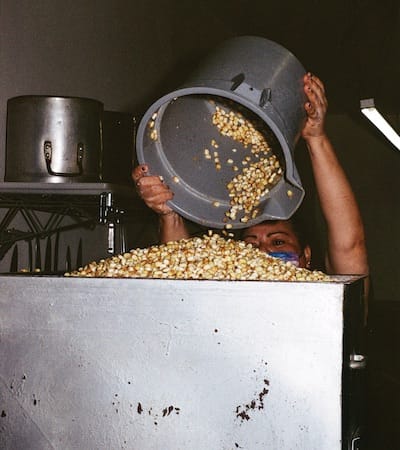 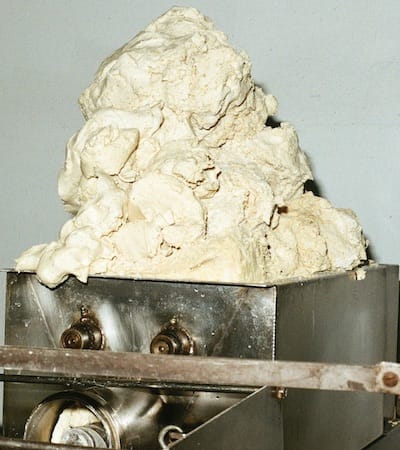 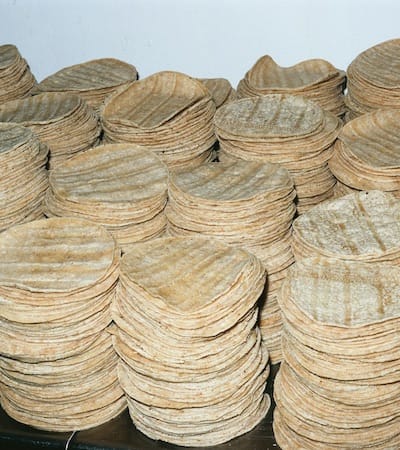 I have to admit to waffling. When I was young, a big night out was when my parents and grandparents took us to Rusty’s Hacienda in Glendale. I knew even at 8 years old it was super high class because there were high-backed red vinyl booths and black velvet paintings of toreadors killing bulls. Every meal featured runny refried beans topped with about a pound of melted cheese. The only way to engineer this exquisite mess into your mouth was with a stack of highly resilient corn tortillas. Later on, in my early 20s, when I could exercise away a pound or two just by brushing my teeth in the morning, I switched to flour tortillas so I could make extra burritos using my beans and rice and all the table’s condiments. In this way, I was able to fill out my three-entrée combo platter and induce the inevitable food coma — evidence that my meagre funds were well spent.

Now that I am older and refined to an almost Edwardian degree, I have  consigned the contemptible flour tortilla to bleary-eyed commuters inching along the interstate while gnawing on scrambled egg and bacon wraps and late-night bar flies wilding mini marts in order to ravage their hot racks for week-old chimichangas.
I have returned to the corn — and not only for the health benefits. It’s smallish size, strength, and flexibility make it the equal of any of the world’s flatbread, even the fabled onion-filled naan, whose antecedents are almost as ancient. It’s like a playful, flexible backhoe, capable to scooping up anything from mole to menudo and delivering it without the loss of a drop into one’s gaping maw.

Arriola’s moved out of the house, around the corner, and down the street into its own dedicated factory around 1964. Townley’s grandfather, Ray, took over the next year after his parents passed away and was the undisputed boss of the operation, coming in daily to supervise, until dying last year at the age of 88. It was Ray who slowly diversified, reckoning that the growing availability of supermarket tortillas meant a diminishing slice of the torta for his clan. Townley isn’t sure when his grandfather made the move to hot food like their nachos with Chile Colorado and Chile Verde, but it was fitting that they also made the only chip strong enough to dig into one of their meaty, soupy stews and not only hold a mouthful, but also retain its crunch.

Old World Spaniards insisted on the soft tortilla, which originated in northern Mexico and is made with flour, water, fat, and salt. 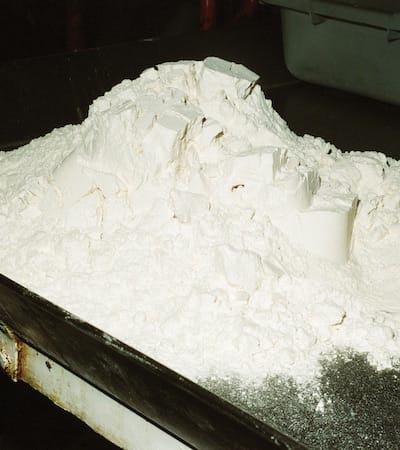 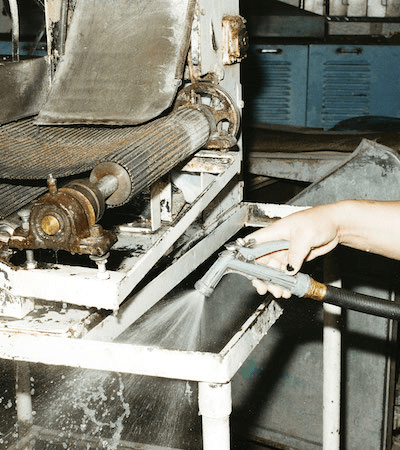 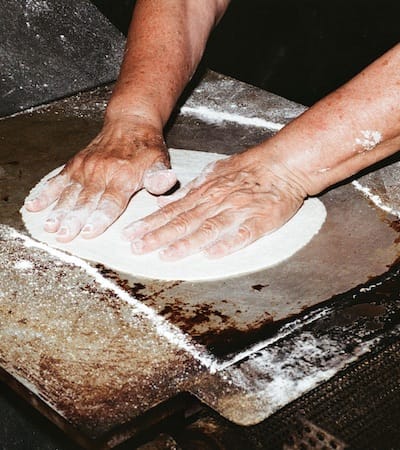 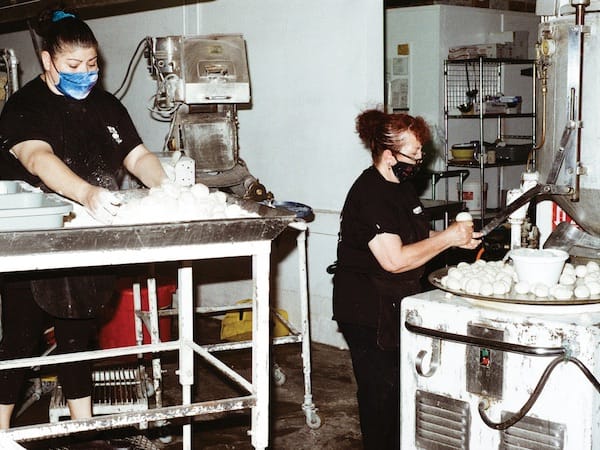 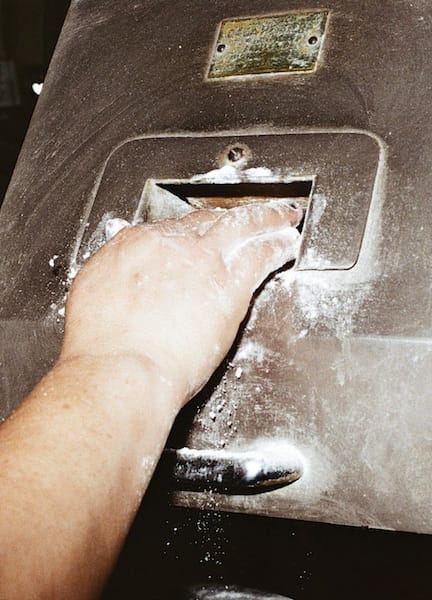 Our chips are our biggest seller,” Townley says. “They’re a little bit thicker. And that works really well with the toppings we use. That’s what we’re really known for. I think if you were to try those toppings with some chips from a store, they’d just break.”

It’s not unusual to see the small, low-slung store completely cleaned out of all their fresh corn and flour tortillas, and even their massive 30-pound bags of tortilla chips, in a single day, he says. Utilizing a massive tortilla-making machine, they make around 6,000 corn tortillas and 2,400 flour tortillas. In a single year, they order more than 80,000 pounds of non-GMO corn. Huge vats of oil sit on burners while several workers fry large batches of fresh corn tortillas and turn them into sturdy, rich triangles of almost mythic strength. 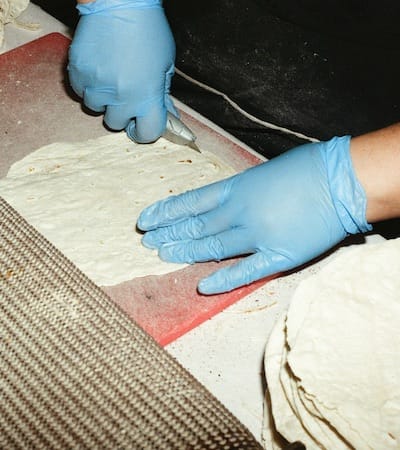 Though the small building is mostly given over to tortilla making, chip cooking, and the preparation of tamales, stews, and nachos, it is unusually pleasant to hang out at the corner, waiting for your order, and taking in the perfume of toasted masa, fried chips, and the tang of Chile Colorado and Verde. You don’t need an appetite when go there: one is magically provided a minute or two after entering.

Though downtown Indio has struggled at times, the family has weathered all the ups and downs. Despite store closures all around them, they plan to stay in business for another generation. Townley’s niece, a fifth-generation descendent, has already put in time behind the counter. Before the pandemic, they were regularly mobbed during music festival season. When classes go live again at the East Valley campus of College of the Desert, Townley expects students will be a big part of the uptick in business.

Still, the tortilleria’s most consistent customer base, Townley says, are Indio locals. “Our biggest following is the … people who grew up on the food. A lot of people come in who are older than me … and they kind of grew up on the tortillas.”