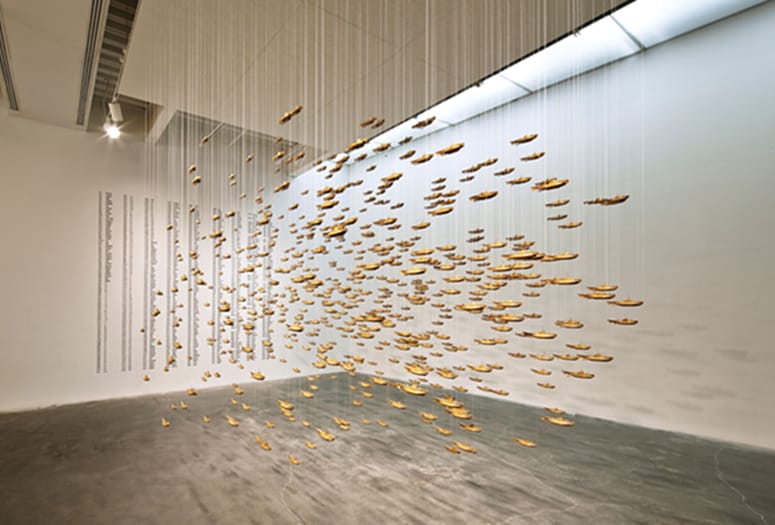 The desert has always been a frontier for artists. Native tribes were responsible for the earliest creative output, which manifested in basketry, vessels for food and water, and other tools and objects. With the introduction of the Southern Pacific Railroad, impressionist-style painters began forming an artist colony here, and their early-1900s depictions of the spectacular desert landscape still enjoy an audience today. Contemporary artists come to the desert for many of the same reasons as their predecessors: the space, light, favorable economics, and supportive community. You can see it from Joshua Tree and the High Desert to the tiny Salton Sea community of Bombay Beach.

The common thread between these artists, past and present, is place. But now artists explore the desert beyond its landscape.

Over the next few months, several large-scale art exhibitions offer wide-spanning perspectives on the desert. 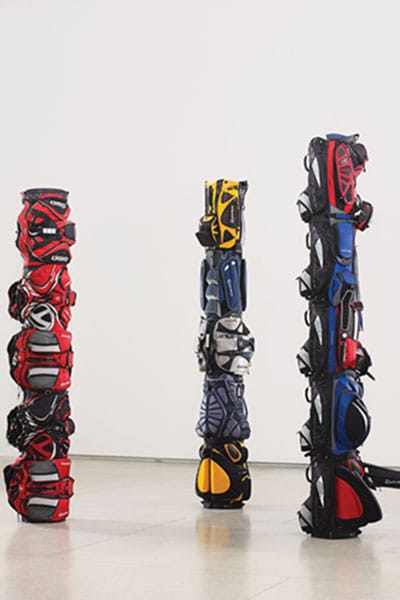 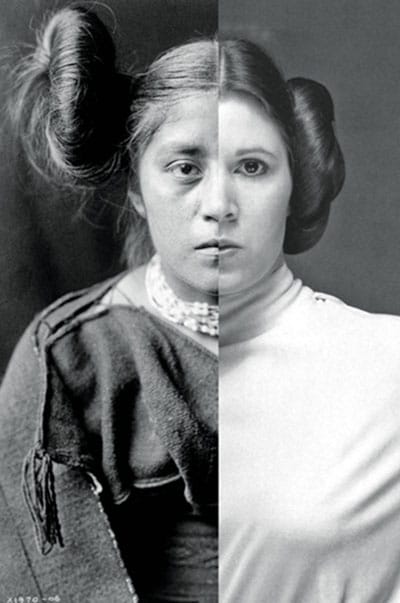 The most poignant of the Ruscha Works is the 1984 painting Lost Empires, Living Tribes. The title words appear in white-painted block letters over a foreboding purple and gold sky.

—Start with the big picture at Palm Springs Art Museum, where Unsettled (through April 30, 2019) packs both cavernous wings of the museum’s main floor with 200 works by 80 artists. The show, curated by JoAnne Northrup of Nevada Museum of Art in collaboration with artist Ed Ruscha, plunges into themes of the Greater West, a “super-region” stretching from Alaska to Patagonia and from Australia to the American West.

“As a touchstone,” Northrup notes in her exhibition catalog essay, “each thematic area includes work by the iconic and legendary Los Angeles–based artist Ed Ruscha, whose singular perspective on the world and experiences in the ever-changing West have informed the content of this exhibition, as well as shaped the selection of artworks for it.”

Probably the most poignant of the Ruscha works is his 1984 painting Lost Empires, Living Tribes. The title words appear in white-painted block letters over a foreboding purple and gold sky. Northrup suggests it “conjures the history of the Spanish conquistadors, who in the 16th century, under the leadership of Hernán Cortés, embarked on an expedition to New Spain that resulted in the destruction of the Aztec Empire. The population of current-day Mexico, rich with indigenous peoples who are the heirs to the past civilizations, is evoked by the phrase ‘living tribes.’ ”

Indigenous artists created many works in the show, including Nicholas Galanin’s  Things Are Looking Native, Native’s Looking Whiter, which shows how pop culture mines indigenous cultures for inspiration, juxtaposing a 1906 Edward S. Curtis photograph of a Pueblo Indian girl wearing a squash blossom hairstyle with a 1977 depiction of Princess Leia from Star Wars, who wears a similarly crafted bun.

Other eye-catchers include Chris Burden’s All the Submarines of the United States of America and Brian Jungen’s totem pole sculptures that he created with golf bags. 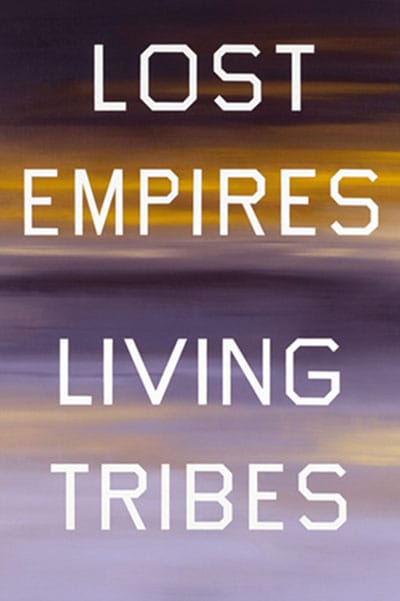 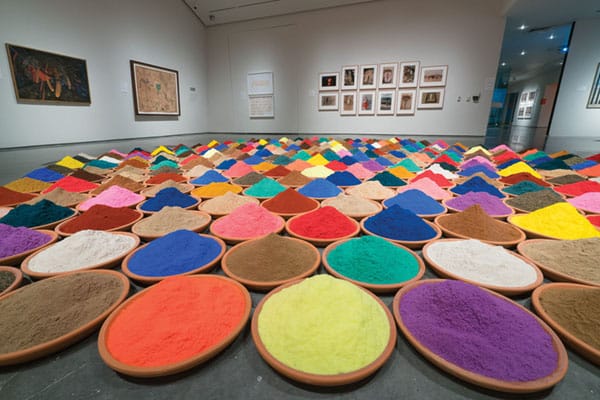 Flight Plan: The Birds of Sunnylands

—California lies within the 4,000-mile-long Pacific Flyway, where millions of migratory birds travel from north to south, as far as South America, for food in the winter months. The Salton Sea is the southern terminus for many birds and a staging area for others. More than 400 species have been spotted there.

Media mogul, ambassador, and
bird lover Walter Annenberg designated a large swath of his 200-acre Rancho Mirage estate as a bird sanctuary. Documents reveal that he kept track of the species that visited each of his homes. Avian artist Basil Ede documented the birds at the Annenbergs’ Pennsylvania home. And about 15 years after Annenberg died, The Annenberg Foundation Trust at Sunnylands commissioned National Geographic photographer Tim Laman to document as many of the 130-or-so bird species that have been recorded on the property. (Over the years, Sunnylands has hosted expert-guided bird tours, and participants’ observations helped establish its list of migrating and resident species.)

The exhibition Flight Plan: The Birds of Sunnylands, through June 2, 2019, at Sunnylands Center and Gardens, features photographs of 52 different species. Each image, says Michaeleen Gallagher, director of education and environmental programs, shows details of bird behaviors seldom seen or noticed. 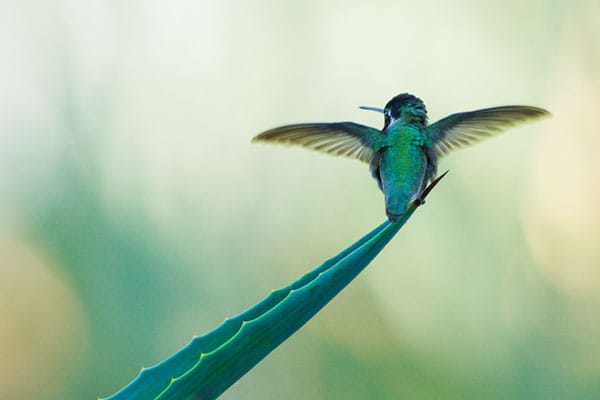 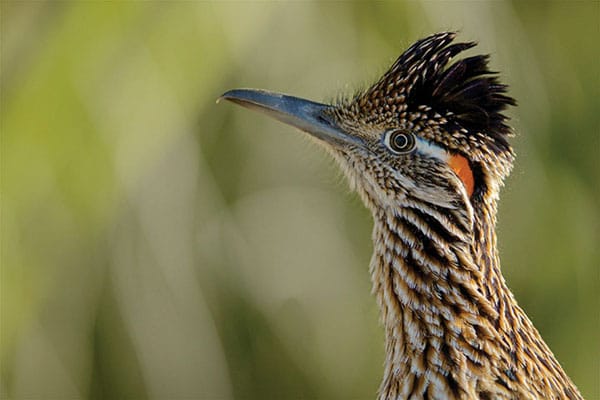 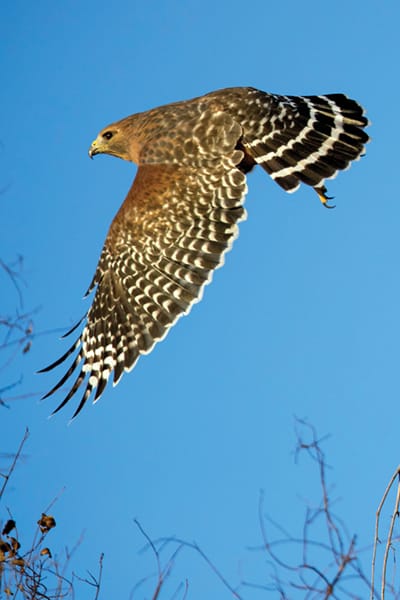 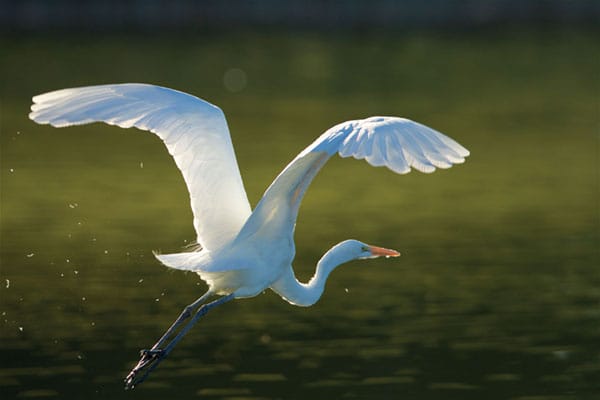 A great egret at Sunnylands in Rancho Mirage.

—The book is written on Desert X, and you can buy a copy starting Feb. 9, when the second iteration of the site-specific art exhibition opens across the Coachella Valley and at the Salton Sea.

Mum’s the word on the participating artists, but we know that artistic director Neville Wakefield returns with a new lineup of talent and the help of co-curators Matthew Schum and Amanda Hunt.

The 2017 exhibition featured 16 artists and drew more than 250,000 visitors. Curators from museums around the country stood in line with locals, most of whom had hardly any knowledge of or interest in art, to see odd installations in odd places. They descended into Will Boone’s Monument, a bomb shelter containing a life-size sculpture of John F. Kennedy, as well at The Circle of Land and Sky, Phillip K. Smith III’s installation of 300 reflective beams that appeared to lift the ground and pull down the sky. Doug Aitken’s Mirage, a makeshift ranch-style house covered inside and out in mirrors, went viral on Instagram. And other favorites included Sherin Guirguis’ One I Call, an adobe structure in Whitewater Preserve, and Claudia Comte’s painted op-art wall, Curves and Zigzags, in Palm Desert. 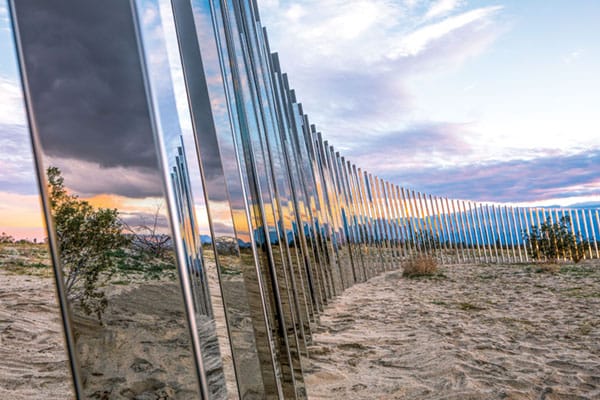 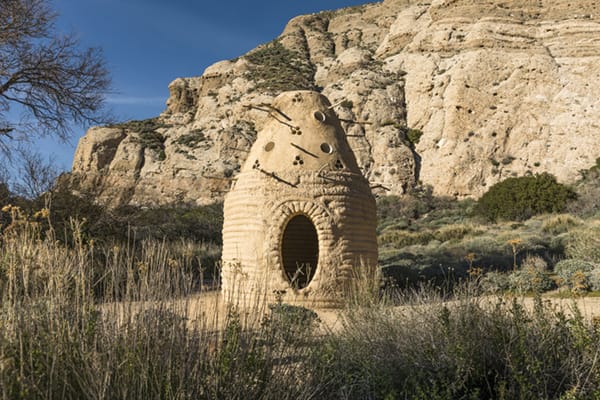 ... and Sherin Guirguis’ One I Call were among the most popular site-specific art installations in the inaugural Desert X.

“What’s new is a focus on the desert as paradise and paying respect to the history of the desert both ecologically and anthropologically and using that platform to devise strategies for moving forward with optimism,” Leibov says. “It’s a way of using the desert as a microcosm for a positive way to move forward. If it all becomes desert, how do we have a future we want or would look forward to?”

Catalan brings a modernist perspective to the landscape by using artificial elements to create a suprematist garden that serves as an ideological model of a way to view the desert. Zigmund, teaming with horticulturalist Samantha Harris, also asserts modernist strategies to bring a perspective to often overlooked members of the desert ecology. Berg and Miniucchi’s installation juxtaposes deserts of sand and ice. Adriene Jenik will do eco-tarot readings of individuals’ ecological future and, with their permission, transmit the readings to a studio where Dominic Miller mixes, loops, and transfers them to play from a sculptural installation. Séverin Guelpa, who created installations about water in Amboy, will install monumental sculptures inspired by indigenous baskets and vessels. And Lewis deSoto, a Cahuilla artist living in Napa, brings an anthropological understanding to the event with a trio of performances and a video installation. 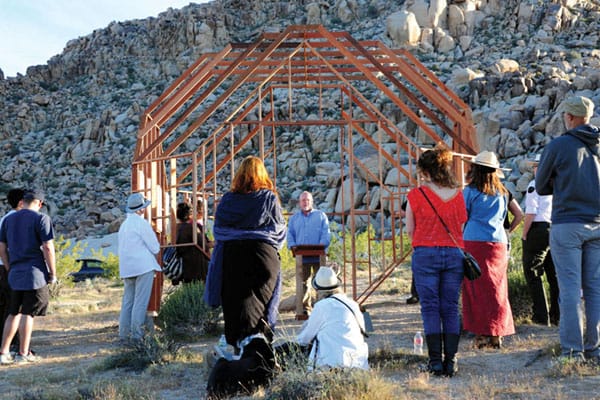 —If you’re in the market not only to look at but also to buy art, you’ll want to attend Art Palm Springs Feb. 14–18, 2019, at Palm Springs Convention Center. The eighth annual fair features about 60 galleries and more than 300 artists from around the world. The artworks here represent modern and contemporary and come in a variety of media, from painting and sculpture to photography, video, and conceptual formats.

The fair honors L.A.-based Charles Arnoldi as Artist of the Year. Known for his bold, colorful abstract paintings and sculpture, the artist is equally adept at creating mural-scale canvases as well as intimate gouaches on paper, in both hard-edge geometric fashion and looser, more fluid compositions.

The fair also fêtes Marilyn Pearl Loesberg as Patron of the Year. The collector and director of the Clinton Hill Foundation has served on the board of Palm Springs Art Museum for longer than a decade and chairs the museum’s Collections Committee. 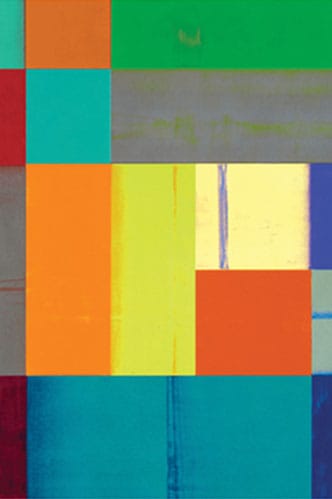