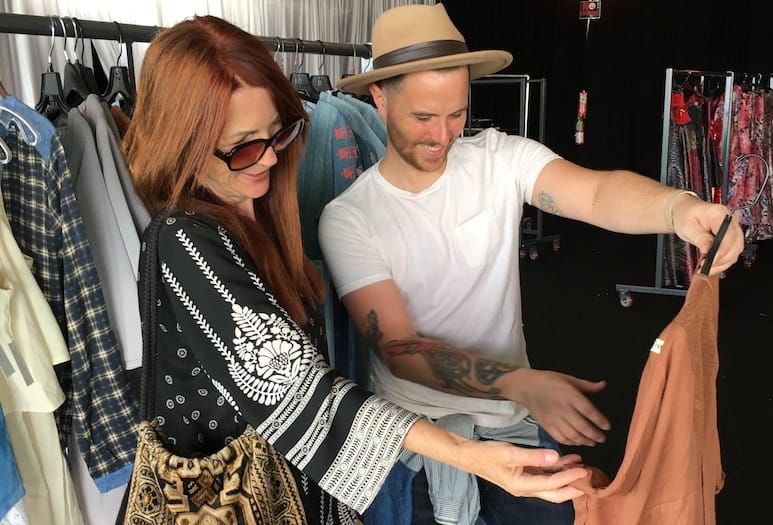 My best writing teacher once reminded me that, “art is architecture” when I briefly refused to pay attention to structure while in the “imagination” stage. “Nothing good hangs from bad bones,” he warned.

In fashion as in literature, it’s the bones of a piece that make it sing, or in the case of fashion, walk and wear well, and all the designers at the Project Runway Trunk Show were walking tall on Wednesday afternoon.

It might be hump day for El Paseo’s Design Week, with temperatures inside the tent topping an uncharacteristically muggy 90 degrees, but all the designers looked fresh and excited as they chatted with both serious buyers and curious looky-loos, took careful measurements for custom made creations, and paused to chat about the various inspirations behind their latest ready-to-wear lines and silhouettes showcased on the runway the night before.

Between agreeing to a selfie with one of his fans and organizing a garment bag for a client’s on-the-spot purchase, Michael Costello, the best known of the featured designers, showed me his black “bondage mermaid bandage dress.” After explaining that the use of black netting is designed to make the wearer look like a “mermaid captured,” I asked Costello why he favors the legendary mermaid silhouette, which consistently appears in his collections. “I like the way it makes a woman look,” he observed, and went on to say that he wants a woman in a Costello dress to feel powerful, like she could take on the world. In this latest creation, she will feel positively mythic.

Chicago-based Peach Karr of Good China, known for wearable evening looks, casual daywear, and super chic clutch bags that play with texture and color, talked to me about the recent arrival of red in her life, an addition to her signature black and white. All of her clothes, even the sequined dresses perfect for the most festive celebration, are machine washable and made to easily pack and carry. To prove this last point, Karr showed me an ultra-soft black and white maxi striped skirt with a mermaid skirt and not a single wrinkle, telling me that on a recent trip to New York, she “Put it in a sandwich bag and pull it out and it looks like this.” In a word: flawless.

Rarely are patrons allowed to see the artisans behind their outfits. Each of these artists brought to their looks a distinct vision, from Justin LeBlanc’s gorgeous laser cut black chokers and flowing fabric pants that resembled culottes, but were actually flattering; to a pyramid-shaped gold cuff and diamond snake pinky ring by JN Jewels; to Kini Zamora’s play with color in the traditional Mondrian dress shape. Jesus and Antonio Estrada custom cut all of their dresses and gowns, which range from flowing sundresses perfect for a beach vacation, to a structured strapless gown with a stiff cage of surrounding fabric that would make a statement on any red carpet.

Perhaps most unique was Christopher Straub’s playful collection, inspired by the 1980s video game Space Invaders. “I took that little icon and made a couple prints and made appliques,” Straub explained, then stitched the space invader on bags and shirts. Rarely has a shift dress looked so fun. A blue sweater with a front-and-center alien and pixels running down the arms is a pop culture reference that will appeal to anyone with a sense of humor.

Reaching the end of the hall, I finally decided to spend some of my very own cash money, encouraged by the woman perusing the somewhat depleted racks who confessed that she never dresses her age. “Why would you?” I asked. As I admired a flouncy drop waist dress that took my beloved 90s chambray to the next stylish level, Texan designer Anthony Ryan Auld told me that his clothes are for “the girl who lives in jeans and T-shirts,” or the “Coachella girl.” Mychael Knight, a Project Runway Season 3 vet, provides assistance to one of his customers.

“I’m your girl, then,” I promised, and started digging in my bag for my wallet. We agreed that cowboy boots with anything, including one of the boxy, knee-length denim dresses with a red front drawstring and embroidered detail that he chose for me (out of his literal trunk of clothes), was a look so casual and confident and affordable that it will always be in style. I immediately texted all of my Texas friends and suggested they visit Auld’s flagship San Antonio store to pick up one of his ultra-soft ombre sweatshirt dresses or a cream romper that actually covers more than it reveals.

Fashion isn’t just silly whimsy. Designer clothing is not always outrageously priced. It is about imagination springing to structured life, and made to wear. The hard-working artists at this successful trunk show put effort and thought into how to structure their sartorial visions, not just so they look pretty hanging on the hangers or from the bodies of statuesque models, but on real people who want to look original and sophisticated, sometimes whimsical, but always stylish.

This thoughtfulness is key, this attention to architecture, without which the imagination of these designers might fall flat, in much the same way my earliest stories did – beautiful, but with no plot. Now, hanging in my closet, I have undeniable proof that my teacher was absolutely right.