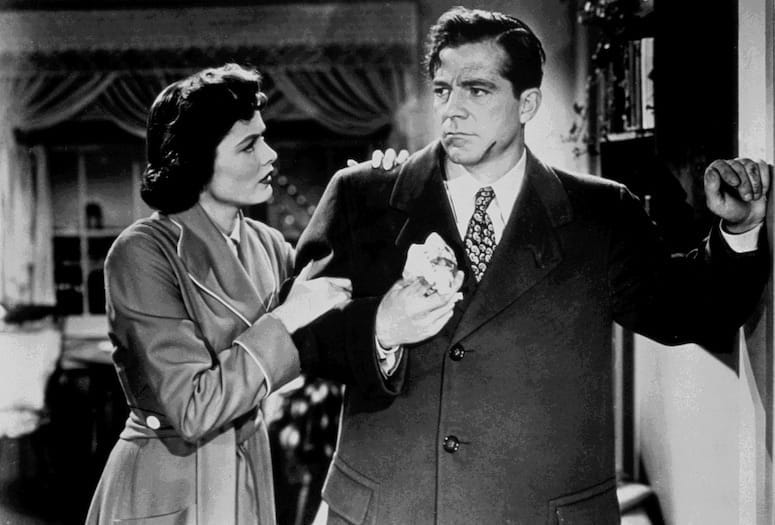 Dana Andrews (right) and Gene Tierney team up in Where the Sidewalk Ends, which opens the Arthur Lyons Film Noir Festival on Oct. 21 in Palm Springs. Andrews' daughter, Susan, will appear after the screening for a Q&A.
PHOTOGRAPHS COURTESY ARTHUR LYONS FILM NOIR FESTIVAL

Arthur Lyons grew up and spent his formative years in Palm Springs. He served as a city councilman. He wrote mysteries and organized writer conferences, which drew well-known mystery authors, like Mickey Spillane, to visit Palm Springs.

Those conferences spawned the idea of the Arthur Lyons Film Noir Festival, which returns this month to celebrate classic black and white films, Oct. 21-24, at the Palm Springs Cultural Center.

Alan Rode met Lyons at the 2002 festival, and that connection led him to become actively involved in the festival’s programming.

“I started helping Art with special guest recommendations and interviews.” Rode remembers. “I began hosting some of the films back in 2003, like City That Never Sleeps and interviewing the celebrities.” 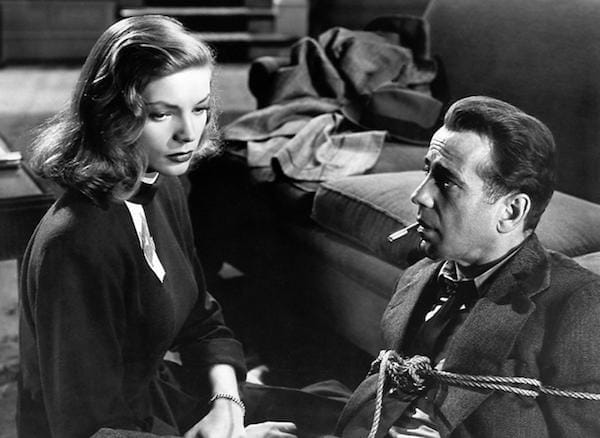 Lauren Bacall and Humphrey Bogart star in The Big Sleep, set to screen Oct. 22 during the festival.
When Lyons passed away in 2008, the Supple family, who owned the hosting Camelot theaters (now the Palm Springs Cultural Center), asked Rode to continue producing the festival. He agreed, and since then Lyons’ role has been honored with his name added to the festival’s title and the 2021 edition marks 21 years since its inception. The secret to the festival’s longevity is not lost on Rode.

“Seeing these movies in their original format, in a darkened theater with a group of like-minded film fans is the essence of the festival," Rode says. “We're not just saving the movies so to speak, we're saving the whole experience of going to see these movies that were in the '40s, '50s, and some of them into the '60s and '70s. I believe people genuinely cherish that experience.”

As one of the charter directors of the Film Noir Foundation, Rode has access to rare films and 35-millimeter prints. He has also brought in a cavalcade of Hollywood stars including Ernest Borgnine, Stuart Whitman, Barbara Hale, Marsha Hunt, and the late Norman Lloyd, who was 100 when he appeared for the second time at the festival.

“Most of those stars of that era are gone now” says Rode. This year’s schedule includes the offspring of some of the people associated with the films.

Palm Springs Life chatted more with Rode about the festival. 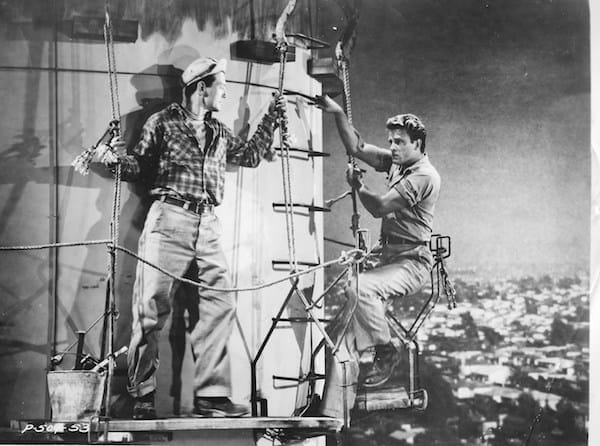 How does it feel to be back with an in-person event this year?

I am really am looking forward to it. I think it's going to be great, just to be back in the theater at the podium, looking out to the audience that includes a lot of people I know. It’s really special that we’re all together again, watching movies. The Palm Springs and Coachella Valley community has always supported this event, and I am hoping this year is no exception.

There's a continuum of personal relationships and professional relationships that runs through this event. The Camelot Theater is one of my favorite places to be in the world. I’m probably going to have to tamp down my enthusiasm on Oct. 21, when we screen Where the Sidewalk Ends. I’ll have Susan Andrews as the special guest, who is the daughter of the film’s star Dana Andrews, and extremely knowledgeable about her father.

Why are classic black and white movies still so popular?

I think it comes from the fact that film noir is often the connectivity for a lot of younger people to classic film. There's also a certain nostalgia for an older audience, because they grew up watching these films either in the theaters, or on TV, or they perhaps haven't seen certain films with their favorite stars. But they know if it's a movie with people like Edward G. Robinson, Lauren Bacall, Charles McGraw, James Cagney,Robert Taylor, or Lee Marvin — it's going to be a terrific experience.

Most of these movies were made during the era of the Hollywood star system, when there was a certain aura about the actors. For many of us, this fascination with the glamour of Hollywood and the stars endures. While a lot of that mystique has faded over time, I think for our audience, the allure of movies and the stars from that golden age remains compelling. 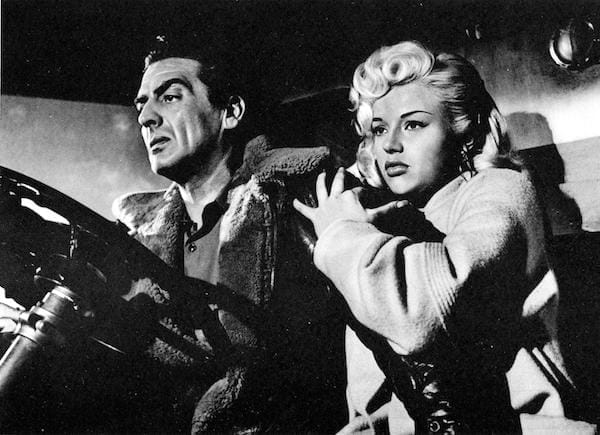 Victor Mature and Gene Anderson are cast together in The Long Haul, which screens Oct. 24. Victoria Mature, Victor's daughter, will help introduce the film.

What is your absolute favorite black and white movie and why?

That's like asking me which one of my three grandchildren I love the most! There are several films I adore: Out of the Past, The Narrow Margin, and The Breaking Point with John Garfield. There are many other films besides film noir that I'm very fond of such as The Best Years of Our Lives and Twelve O’clock High. Chinatown is another favorite but it’s hard to pick one.

How did you come up with the programming for the festival? Is it getting harder to find speakers to bring in? What does it require on your part to try and find these people and ask for their participation?

The festival is 21 years old, and I don’t think we’ve ever shown the same film twice. Film noir is the gift that keeps on giving because noir, like beauty, is in the eye of the beholder. I always try to program films that I know our audience will appreciate. Guest wrangling was somewhat challenging this year because of the COVID situation.

I enjoy having knowledgeable guests whose insights and experiences supplement a particular film and add to the entertainment of the audience. This year, the guests are the daughters and son of those who appeared in or made the films: Susan Andrews, Victoria Mature, and Mark Fleischer along with Steven C. Smith, an accomplished author and filmmaker. TCM’s Noir Alley host Eddie Muller, who has been a fixture at the festival, will be joining me to introduce the films.

What are your recommendations that people should see in the festival?

Candidly, they should see all of them! I think everyone should buy an all-access pass, support the festival and the Palm Springs community, and watch whichever film they prefer. All of the films are worthy. I recommend several that are not on Blu-ray or streaming, like El Vampiro Negro, The Cruel Tower, and Angels with Dirty Faces. Sunday morning, I'm showing a film at 10 a.m. that's not on streaming DVD or Blu-ray, Playgirl from 1954, directed by Joseph Pevney, a long time Palm Desert resident who passed away in 2008. Joe was a very accomplished director who also directed many of the original Star Trek episodes. The French film Quai Des Orfevres aka Jenny Lamour is terrific - how many crime dramas can you call heartwarming? Truly a unique film. The last film on Sunday at 4 p.m., The Reckless Moment, is a masterpiece starring Joan Bennett and James Mason. We’ll be showing it with 35-millimeter print from Sony-Columbia. I think all of these films have something to offer.

What covid policies will be in place for the festival?

In order to buy a ticket or buy a pass, people have to show their proof of vaccination. If you're not vaccinated, you will not get in. At the theater, we're not going to seat at full capacity. People will have the ability to socially distance themselves, as they want. People also need to wear a mask when they are moving through the theater. When seated they do not need the mask while munching on popcorn, and enjoying the movie.