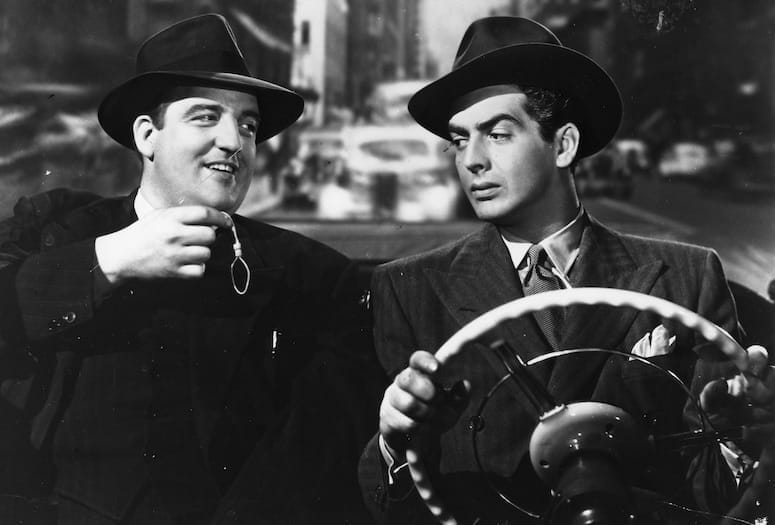 Victor Mature (right) stars with Laird Cregar in I Wake Up Screaming, which will screen during the Arthur Lyons Film Noir Festival, May 12-15, in Palm Springs.
PHOTOGRAPHY COURTESY ARTHUR LYONS FILM NOIR FESTIVAL

Alan K. Rode couldn’t think of a better way to celebrate the 22nd year of the Arthur Lyons Film Noir Festival than with a pair of names so integrally linked to it as Victoria and Victor Mature.

“Victoria Mature is supremely talented in her own right,” says Rode, who has produced the festival since 2008 following the death of its namesake founder. “And naturally, she wants to uphold the legacy of her father. She offered to perform her cabaret act as a fundraiser for the Cultural Center and the festival, which left me both overjoyed and humbled.” 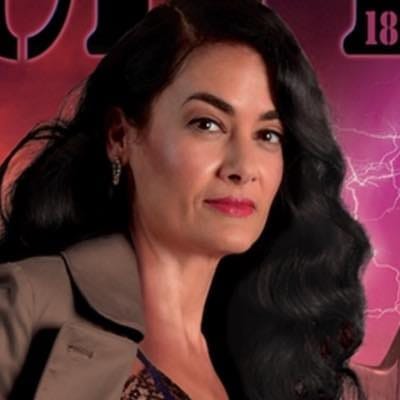 Victoria will also introduce one of her father’s films during the festival, I Wake Up Screaming, a 1941 crime mystery that was one of the first film noirs co-starring Betty Grable. The film screens at 1 p.m. May 15. She was a guest of Rode's at the 2018 edition of the festival when her father's film, Kiss of Death, screened.

“Not many people can relate to having a movie star for a father,” says Victoria. “But just about anyone can relate to the desire to connect with the people they love.”

From his first film appearance, the Hal Roach comedy The Housekeeper’s Daughter in 1939, Victor Mature’s ‘hunky” 6-foot- 3 inches of sex appeal attracted 20,000 fan letters, according to the Turner Classic Movies (TCM) website, resulting in his first leading role in One Million Years B.C. (1940). His career hit its peak in the 1940s and ‘50s, including a series of high-profile biblical stories, Samson and Delilah (1949), The Robe (1953), Demetrius and the Gladiators (1954) and The Egyptian (1954). By the early 1960s his film roles had diminished, but Victor appeared in several featured roles including After the Fox (1966) with his final film a remake of Samson and Delilah in 1984.

Mature was on his fifth marriage to opera singer Loretta Sebena and his heralded film career was well behind him when Victoria was born in 1975. He died from leukemia when Victoria was 24. Over the succeeding years, Victoria knew in her heart that she didn't want to disconnect from her father and his legacy. She began avidly studying his work: “I was really surprised at how good some of the musicals were. And the noir films were revelations to me.”

• VIDEO: Watch this intro to I Wake Up Screaming with TCM Host Eddie Muller.

She continues: “Ironically, it was my father’s critical and box office success in post-World II films like My Darling Clementine, Kiss of Death, and Cry of the City that landed him the role of Samson in Cecil B. DeMille’s epic Samson and Delilah (1949) that catapulted him to international stardom and resulted in further epic blockbusters such as The Robe (1953 — the first CinemaScope release) and its follow-on sequel Demetrius and the Gladiators (1954).”

After discovering what a truly gifted actor her father was, Victoria decided to share his talents with a wider audience. “That’s what I’ve been doing for the past six years; connecting with my dad, first by watching his films on the small screen at home and then by introducing them at theatrical film festivals venues — the way his films were meant to be seen — including The TCM Classic Film Festival, the Noir City Film Festivals in San Francisco and Hollywood, and now the Arthur Lyons Film Noir Festival in Palm Springs. “ 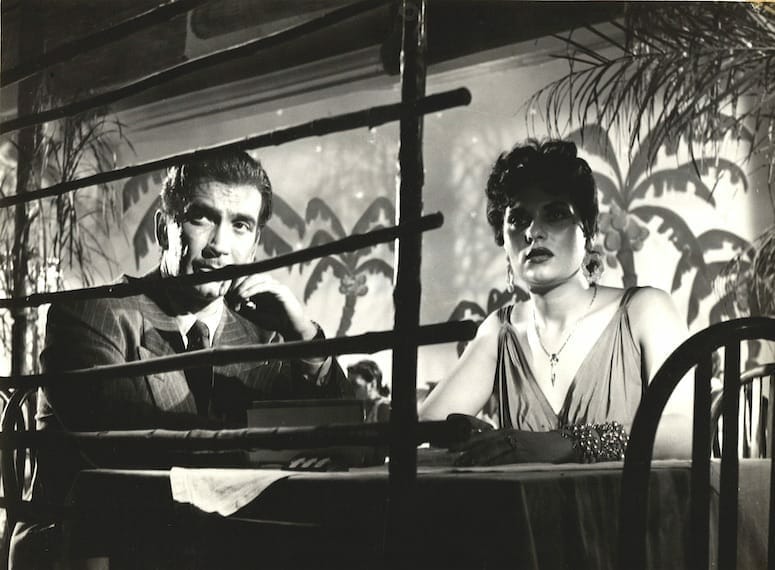 Los Tallos Amargos (The Bitter Stems), a best picture winner in Argentina in 1956, will be shown May 14.

As for Rode, he loves each and every film he brings to the annual Palm Springs festival. Many films have been rescued from obscurity or ruin such as Los Tallos Amargos (The Bitter Stems), a best picture winner in Argentina in 1956. This masterpiece along with The Guilty (1947) and The Argyle Secrets (1946) were restored by the UCLA Film and Television Archive with funding from The Film Noir Foundation and will be presented at this year’s festival. TCM Noir Alley host Eddie Muller will be on hand this weekend to introduce several of the weekend films with the network returning as a festival sponsor.

Opening night on May 12 features a guest appearance by renowned critic and film historian Leonard Maltin, who will co-introduce the 1949 film, They Live by Night. “I've invited Leonard and his wife Alice to this festival for several years, and the scheduling never worked out. So I am delighted they were able to make it this year,” said Rode. Prior to the 7 p.m. screening, Maltin will be in the Cultural Center theater lobby to meet festival patrons and sign his latest book Starstruck: My Unlikely Road to Hollywood. 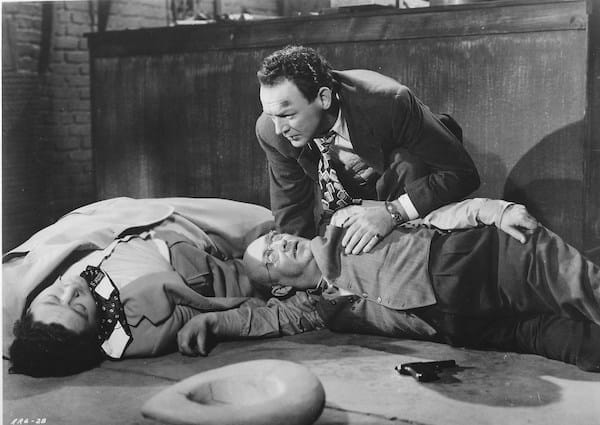 The Argyle Secrets (1948) is based on a radio play and was shot in eight days.
On May 13, the festival begins with one of the under-the-radar gems, The Argyle Secrets (1948). Three more films will be shown throughout the day, Phantom Lady (1944), I Walk Alone (1947) and the Technicolor noir Leave Her to Heaven (1945). “We’re also showing a number of well known films —many of these pictures were mainstream box office hits and I like to present an entire spectrum of films from the classic noir era,” said Rode

In addition to Los Tallos Amargos screening on May 14 at 4 p.m., the screenings that day also include Among the Living (1941), The Guilty (1947), and the original theatrical version of Touch of Evil (1948) presented in 35mm.

Three more films conclude the festival on May 15, including Moonrise (1948), Detective Story (1958) and I Wake Up Screaming. Here is the full schedule. 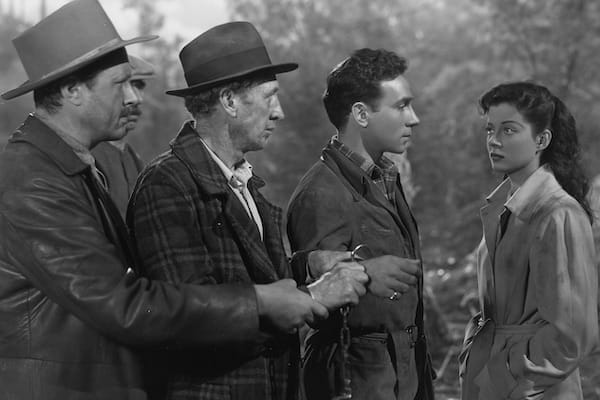 Moonrise, which screens May 15, stars Dane Clark (third from left) and Gail Russell.
Rode believes this year’s festival underscores the importance of preserving and presenting these pictures with an in-theater experience in light of the pandemic restrictions over the past two years, saying, “In order to be properly appreciated, these films need to be presented in a theatrical venue as originally intended.”

“I think film is art, but it’s a different experience than gazing at a statue in a museum,” Rode adds. “Watching films lifts your spirits and they cause you to react emotionally or makes you think or wonder. I believe everyone who loves film experiences these feelings. And these movies have maintained that spellbound effect on us for decades after they were originally produced.”

• READ NEXT: Cahuilla Artist Gerald Clarke Creates Mural With His People in Mind.