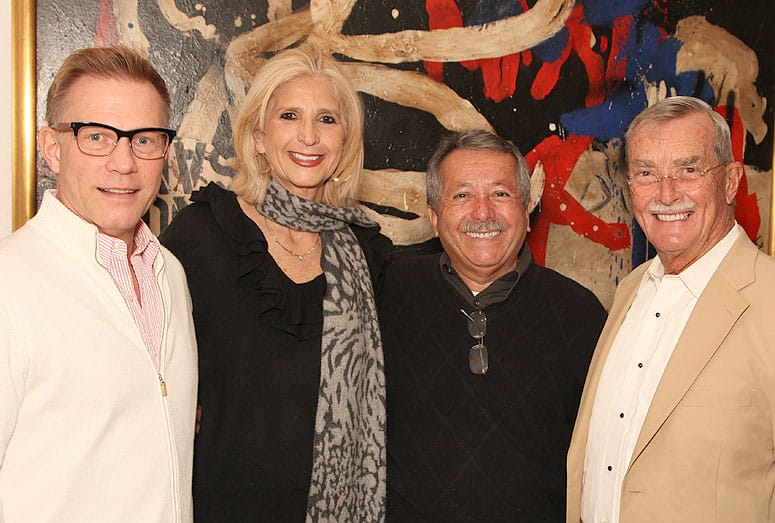 To say that artist TAIRA’S opening at Colin Fisher Studios was an eventful evening would be an understatement. When the doors to the gallery opened and the one-woman exhibition was officially underway, the rush of guests was overwhelming.  Never in the gallery’s history has there been such an enormous turnout for an event, not to mention the names who crossed the receiving line – Arthur Newman’s (as in Paul Newman’s brother and his lovely wife Patty), Frank and Michelle Hevrdejs of Houston, Pebble Beach and Indian Wells, Steven Nash, Executive Director of the Palm Springs Art Museum, Lee Wright Rolfe of the Seattle Wright’s, Barbara and Jerry Keller and a bevy of other illustrious guests, art patrons and those that simply came to appreciate TAIRA’s amazing collection of abstract paintings.

At least 350 guests enjoyed excellent hors d’oeuvres by Lulu’s Palm Springs, complemented by overflowing amounts of wine and champagne.  Overseeing the festivities was the gallery’s owner Colin Fisher. “I could hardly catch my breath trying to greet all of our guests,” remarked Fisher, a much-touted collector and impresario of the Coachella Valley’s gallery scene.

The excitement generated by the number of guests on opening night could not eclipse the impact of TAIRA’s inspiring paintings. The collection, which is comprised of large scale mixed media abstract paintings in a vibrant and striking palette, was praised by guests.  Steve and Jennie Zeff, who flew in from Modesto, own several paintings of the artist and were clearly excited since they immediately laid claim to a painting titled “Amour,” which they ultimately purchased before the evening’s close.