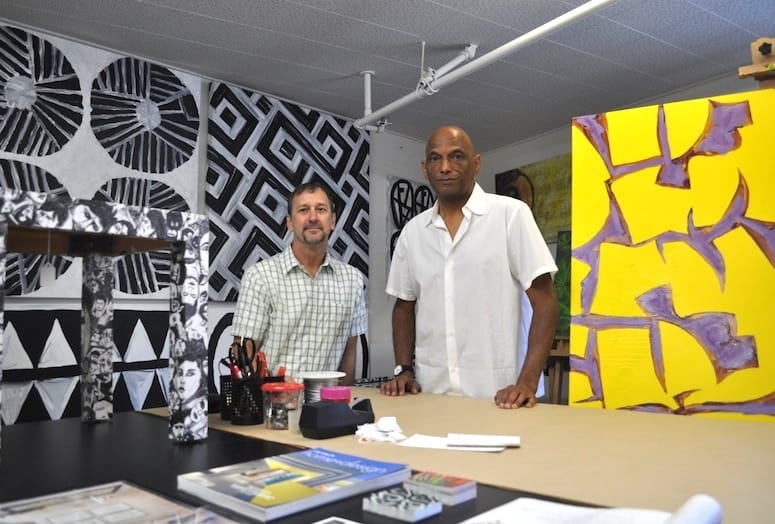 VIDEO: Stephen Kladder and Samuel Fleming Lewis talk about the similarities between their artwork and interior design.

Palm Springs has been a meaningful part of Samuel Fleming Lewis and Stephen Kladder’s lives for many years.

The couple, both of whom are artists and interior designers, met here 13 years ago and Kladder’s family has had homes in town since the late 1970s.

So it seems quite natural, if not inevitable, that they would decide to leave San Francisco this past December and make the desert their permanent home—and the home of their business Lewis & Kladder, located in the Antique Galleries of Palm Springs building in the Sunny Dunes Antique District.

That said, the road to opening their cool new design studio and artist’s space was not exactly a direct route. “I had just moved here and bought a place [when I met Samuel] and I wasn’t quite sure what I was doing,” says Kladder. “I’d left a career as a corporate attorney after 16 years. I’ve always been interested in architecture and design—as a kid I was drawing floor plans of houses—and Samuel told me about UC Berkeley’s program in interior design and architecture at their extension campus in San Francisco.”

And it was at UC Berkeley extension that Kladder first did art. “All the instructors said to take as many drawing classes as you can, so I took a pen and ink class and that was the first time [about 12 years ago] that I really engaged in doing art," he says. He started out with ink drawings, which he's now put on to furniture, and eventually began to paint as well.

Kladder started working for designers part time while he was continuing to go to school and then got a great job working with the interior designer and space planner Jocelyn Muncaster, who did a large project with Google. “I did about a million square feet of Google space over a couple of years period and then the economy tanked and I got laid off,” says Kladder. “Samuel had been doing interior design so we started our own business up [in San Francisco] and did that for about six years.”

Lewis’ career path to design was somewhat more innate. “I lived next door to an interior designer growing up [in Los Angeles] so I learned how to paint walls, wallpaper, do simple upholstery, so there’s always been a side of me doing interior work.”

Lewis also studied at UC Berkeley extension and then worked for the well-known architectural firm of Skidmore, Owings & Merrill in San Francisco and lived for a time in New York where he worked at corporate firms.

Although he wanted to do residential design, Lewis got his first good job in the corporate world and stayed for awhile. “But when you’re an artist, the artist in you keeps calling you back," he says. So he took some time, began working as an artist, and eventually worked for a residential designer. He then designed some custom furniture and the person who commissioned him to design the furniture hired him as a designer. “There was a big learning curve but I worked in high-end residential for about 10 years and then Steve and I started our studio,” says Lewis. “We do a pretty wide range of residential — everything from custom on down to towels and toothbrushes, to just going in and selecting color and suggesting a rearrangement of furniture.”

And their plan was always to come to Palm Springs. “We wanted to do a bigger studio space and a smaller office space and this [their current studio] is exactly what we envisioned,” says Lewis. “There are amazing views [and it’s] very inspirational. “My work has changed. It was all black and white, geometric inspired when I was in San Francisco. The whole palette here is different, the mountains and sunshine. As an artist, to wake up in the morning and see a sky that is pure white is incredible. My current style, influenced by Palm Springs, is fluid and inspired by the colors of the desert." But the duo are equally passionate about interior design. “We think they’re [art and interior design] naturally related because of the creative process,” says Kladder. “It’s kind of an iterative process, like when I’m creating a work it’s almost as if it speaks back to me during the process. And we work well designing together because we’re constantly talking to each other and we like to include our clients in that conversation.”

“There are always several solutions to a specific design problem and you don’t get to those various solutions unless you use it as an iterative process and you talk through it,” he adds. “And that’s kind of what happens in the process of art as well. I think the art enhances our ability in interior design because it gives us just a slightly different perspective on how you look at things.”

“When you go into someone’s home, it’s the most personal space you can go into,” says Lewis. “And a lot of times they have things they truly like, but they’ve lived with it for so long they can’t see it any other way. So you kind of remix and I think that’s where our strength is as being artists because we look at things artistically. We’re always looking at focal points and perspective and how things look next to each other, including color and volume and texture. So we can pretty much walk into a space and give an analysis and give it a fresh look.”