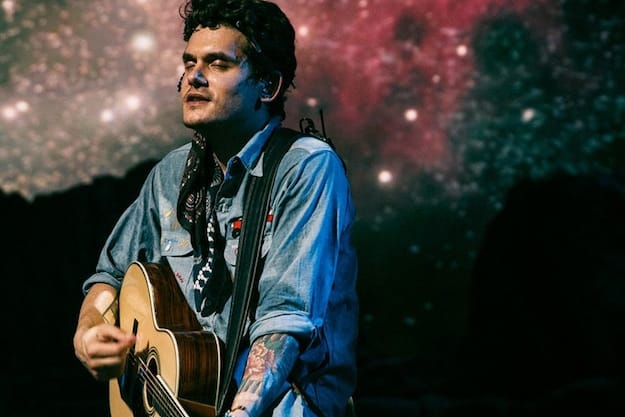 Aug. 5
British rockers Swim Deep release the much-awaited debut, Where the Heaven Are We.  The quartet’s release is a youthful swell of angst, questioning the world, and bravado served best by kids who have yet to know the disappointments of older age. You’ll hear this in tracks like “King City” and “Soul Trippin”.  Lead singer Austin Williams’ sleepy, dopey, and sometimes happy vocal delivery of the band’s lyrics makes this release the fairest of them all.

You also love:
•    The Next Wave Sessions EP by Bloc Party
•    Behold, A Pale Horse by Ebony Bones

Aug. 6
Now 47: That’s What I Call Music holds a special place in my heart. I used to work for the record label that releases the venerable catalog of today’s radio hits. Its latest incarnation is a feast of desirable music including Palm Springs White Party alumni, Icona Pop (“I Love It”), as well as Ke$ha with her hit single, “Crazy Kids”. Aug. 13
Glen Campbell hangs up his “Rhinestone Cowboy” hat and takes a nod from his favorite postcard with the forthcoming release, See You There. Although much has been written about the veteran singer’s health (The Internet is abuzz with reports that he has been diagnosed with Alzheimer’s disease), Campbell’s musical chops are still as enthralling as ever. Kids, take note: this guy is the real deal. You’ll hear it in songs like “Hey Little One”, “Waiting on the Comin' of My Lord” feat. Jose Hernandez and Mariachi Del Sol De Mexico, as well as “Galveston”. Sure, it’s cool to be contemporary, but every so often, learning about the masters can be just as beneficial.

Aug. 20
Ah, memories … In 2009, the singer/guitarist made headlines when he reportedly had a steamy makeout sesh in Palm Springs at Toucan’s … with a boy. According to RadarOnline.com and Us Weekly, locals were amused that the man who coined the term “sexual napalm” in reference to Jessica Simpson had switched teams – if even for a moment. Now, you can relive that magical moment as you listen to John Mayer’s latest album, Paradise Valley. He goes country on tracks like “Wildfire” and continues to amaze on “Paper Doll” and “Who You Love”.

Frequent Coachella attendee Adam Goldberg (2 Days in Paris) drops his LP, Stranger’s Morning under the moniker, The Goldberg Sisters. His easy-listening synth-rock stylings reminisce of Coconut Records and Sean Lennon, with the cheeky humor of a Monty Python sketch. The title track is psychedelic and trippy. This record marks the only time someone should be encouraged to quit their day job. Goldberg has an exciting future in the music industry – should he choose to give it a go, full-time. Aug. 26
Bob Dylan is reminded of Palm Springs every time he strolls through his home. His interior designer, Martin Newman, is a Coachella Valley resident. Thank Dylan for his contributions to the local economy by snagging, The Bootleg Series, Vol. 10 – Another Self Portrait (1969-1971). Dylan created the cover art for the album, which will be available as a standard two-disc offering or, in a four-disc deluxe-boxed set, which includes a performance from the Isle of Wight Festival on Aug. 31, 1969.

Aug. 27
Remember when Scottish group Franz Ferdinand bullied its way into the souls of Coachella 2013 attendees? If not, then you missed one hell of a show. In between bookended gigs, these rockers also took to the stage at Pappy & Harriet’s Pioneertown Palace and showed us yanks what they’re made of. Right Thoughts, Right Words is the band’s latest and showcases the same edgy vocals and riffs that have made them a must in the hipster annals of fame.

Add these releases to your collection:
•    Hail to the King by Avenged Sevenfold
•    Outsides (EP) by John Frusciante
•    Hall of Fame by Big Sean
•    Age Against the Machine by Goodie Mob
•    Halcyon Days by Ellie Goulding (another Coachella alum)
•    When the Music’s Loud by Colette

*All album release dates are subject to change at the discretion of the individual artist and/or record label. If you’re a local recording artist and you’d like me to review your new release in the coming months, please send your bio, CD and/or downloads to: ebony@palmspringslife.com

Submissions will not be returned. Thank you.