Over the past 20 years or so, artists have taken to mining the fraught and forgotten histories of the California desert and dreaming of creative ways to present their findings to today’s residents and visitors. Sometimes, they realize their art as site-specific installations in exhibitions such as Desert X and High Desert Test Sites. Other times, they go it alone, finding audiences wherever the work leads them.

The latter appears to be the case for Barbara Gothard. In late 2019, the Palm Springs-based artist, known for painting surrealist dreamscapes with exacting precision, was at a “fork in the road,” considering different directions for her work, when she sought other women artists of color like herself in the desert to ask how they might navigate such a creative impasse. Although that search fell woefully short, it did turn up an advertisement from a 1910 edition of the Los Angeles Herald recruiting “colored” homesteaders.

“It popped off the page for me,” says Gothard, who learned the ad attracted 23 families from different parts of the country to settle in Lanfair Valley, in eastern San Bernardino County near the Nevada state line. Then, she followed her curiosity. “I started looking for anything more that I could find about these families.” 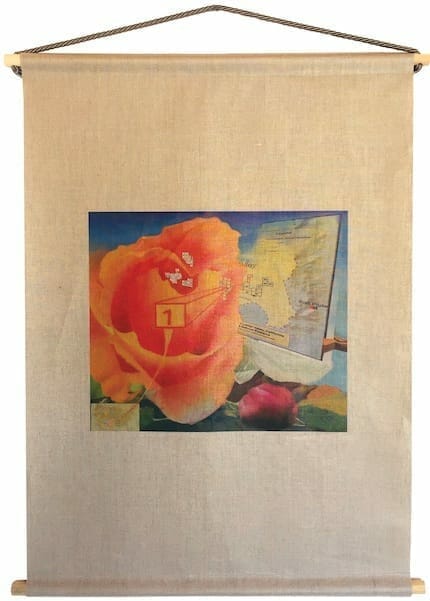 Homestead No. 1, Anna Jones, Arkansas (2021) represents one of the seven women homesteaders. Her state flower is the apple blossom.

To develop and ignite economic growth in the American West, the U.S. government passed the Homestead Act of 1862, allowing any American, including women and recent immigrants, up to 160 acres of land if they agreed to pay a small filing fee, build a 10-by-10-foot (or larger) house, and farm the land. By the early 1900s, the act had granted land claims in 30 states, where settlers claimed prime farmland and Indigenous people were relocated to reservations.

In the Lanfair Valley communities of Lanfair, Dunbar, and Ledge (later renamed Maruba), the homesteaders cleared Joshua trees to farm wheat, field corn, and beans. Dunbar was specifically designated for African American settlers — a place that promised independence and opportunities without the prevailing racism and violence.

Today, Lanfair Valley is a rubble-strewn ghost town that was waiting for someone like Gothard to take interest and tell its story. Through the Mojave Heritage and Cultural Association, she met historian Dennis Casebier, who shared a bounty of information, including copies of original homesteader applications, and pointed her to David Nichols, an archeologist with the Mojave National Preserve. 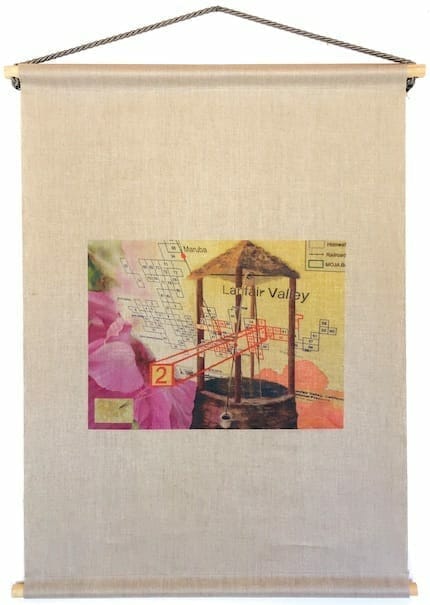 Homestead No. 2, John Richard Moulton, Missouri (2021) represents the laborer and teamster who incorporated Dunbar Water Company in 1913. His state flower is the magnolia bloom.

Nichols had recently commissioned an ethnological and anthropological study of homesteaders that has not yet been published, but, Gothard says, “[Nichols] gave me permission to use any of the information.” She was especially interested in the study’s sources, which deepened her own research.

During the process, Gothard often reminisced about her elder relatives who lived during this time in Springfield, Illinois. “I found myself comparing their lifestyle to the homesteaders,” Gothard says. “There were a lot of similarities: They were landowners. They were farmers. They were resilient. But there were also a lot of differences.” Her family enjoyed more acreage, rich and fertile land, access to water, and proximity to medical care and supplies, she explains.

Her pursuit grew into Contradictions – Bringing the Past Forward, a research-based arts and humanities project that unfolds as a series of 23 digital paintings — one for each of the families that homesteaded in Lanfair Valley — that Gothard created on an iPad and printed in archival pigments on raw linen, which represents the color and texture of the desert. Each work includes a tract map, the official flower of the homesteader’s state of their origin as well as a California poppy, a U.S. map from 1910, and historical images, although she found none of the Lanfair Valley residents.

In creating the digital paintings, Gothard drew inspiration from The Migration Series and Harlem Renaissance paintings by Jacob Lawrence but wanted her new work to ring true to her studio practice. Although she paints meticulous dreamscapes, she is not a figurative painter. “That’s not what I do, and I had no interest in replicating images of people in a realistic way,” she says. “I wanted to include something to represent a living element, and to me that was the state flower. The process of interweaving those flowers with their history was the biggest challenge I’ve faced in my painting career.”

Gothard began her creative journey as a child and earned a bachelor’s degree in art from Mount Mary College in Milwaukee, a master’s degree from Long Island University in Greenvale, New York, and a Ph.D. in educational administration from Michigan State University in East Lansing. She continued painting while she worked as a teacher, school principal, and corporate professional. Art became her primary focus in 2012, when she moved to Palm Springs.

Last fall, Gothard took the first five digital paintings for Contradictions to her artist residency at boxoPROJECTS in Joshua Tree, where she sewed hems and slipped dowels through to hang them, replicated the tract map with blue and orange electrical tape on the floor of the exhibition space, and welcomed visitors to see and learn about the project. She has also given talks to students, history buffs, and others in the community at venues such as Copper Mountain College in Joshua Tree and the Old Schoolhouse in Twentynine Palms.

“People should be introduced to the fact that [the African American homesteaders] did exist,” she says, noting that her project explores themes of identity, belonging, hope, and family. “I want to pique their interest to learn more about them and other folks who may have settled in California and other parts of the country.”

Contradictions, which won grant support from California Humanities and the California Arts Council, hits a high point with an exhibition from Jan. 14 to April 10 at the San Bernardino County Museum in Redlands.

• READ NEXT: Create Center for the Arts is Among Groups Connecting Valley to the Arts.