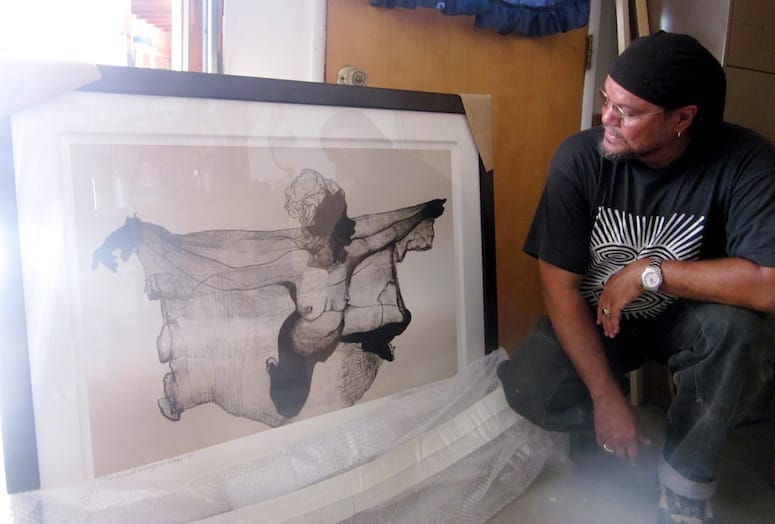 After winning a Bible as first prize in an art contest in his native Jamaica, then 13-year-old Bernard Hoyes chucked it across his bedroom in anger.

His throw broke the book’s spine and he caught hell from his great aunt, a minister. But little did Hoyes know that this book would be the genesis of his art career.

“I ended up reading the whole thing later,” says Hoyes from his Desert Hot Springs home/studio. Paints, canvases and easels are set up in nearly every room, including the deck, garage and kitchen.

Known for his minimalist “Rags” series and colorful spiritual “Revival” series, Hoyes will participate for the first time in the Palm Springs Cultural Art, Food & Wine Festival, Sept. 13-14, at the Renaissance Hotel. Hoyes’ journey from childhood to full-time artist wasn’t easy. His great aunt, who was in her 90s, raised him.

“She had a backyard church that had community gatherings from Thursday to Saturday. There was a lot of singing of hymns and drumming,” Hoyes recalls. “I didn’t realize how much it all meant in developing my character.”

When his great aunt passed away, Hoyes returned to his single mother and a regular school system that he didn’t like. At 13, he went to work in a cabinet shop.

“I was learning to build things, and meeting other artists,” Hoyes says. “But at the end of the week, we had to chase down our boss at the bars to get paid.”

His mother sent him to live with his father in Brooklyn.

“I was reading at the third grade level with an accent,” Hoyes recalls. “But after school, I took arts classes at the Art Students League, which pleased my father.”

He received scholarships and earned a bachelor’s degree in painting, but it wasn’t until he visited Jamaica that his work took on a new meaning.

“I took my wife, LaVera (pictured above), to Kingston to meet my mother and sister, and we slept on the floor with all the bugs and rats,” Hoyes recalls. “That’s when I realized that I needed to get serious about my art.”

From the “Rags” series, Hoyes art took on bold colors and movement in his “Revival” series depicting many aspects of the Jamaican culture, including rituals, dances, and songs. He gained international attention and celebrity collectors, such as Oprah Winfrey, Richard Pryor, and Natalie Cole.