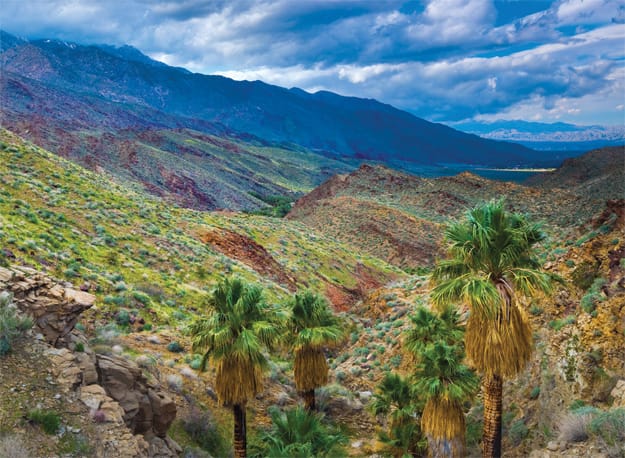 When you pull up to the Indian Canyons tollgate behind a line of cars, there’s plenty of time to study the posted rules (no pets, no loud radios) and watch the resident chipmunks play. Finally, you fork over $9, grumbling silently at the fee and the gate that stands between you and 3,000 Washingtonia filifera palm trees.

You’ll see the tollgate in a new way, though, when you learn the story of the canyons. Without that gate, would there be hotels on Andreas Creek? ORV rentals at the Trading Post? The simple little tollbooth was at the center of the battle for control of this place.

As you drive down the narrow road, turn right for Andreas (if you go straight, you’ll come to the granddaddy grove, Palm Canyon) and look for a hill that appears out of place, as if it fell out of the sky. Commonly called Sugarloaf, it’s a sacred mound where the founder of the paniktum (panik for short) lineage landed, according to the Cahuilla creation story. For the Indians who lived in Andreas and neighboring Murray canyons, this is where it all began.

Most of what we know about these canyons comes from the life’s work of anthropologist Lowell Bean. The Palm Springs resident has completed a popularized version of his report on Andreas Canyon, “Paniktum Hemki,” so soon you’ll be able to learn about this place in the master’s words.

In the meantime, go left over Andreas Creek to the bent palm and pay respects to a champion of the canyons, Captain Juan Andreas. Here, near the clearing with picnic tables and a natural palm tree bench, Andreas lived in an adobe house and fought for his tribe’s right to hold onto these palm groves. Ultimately, he was the last Indian to leave the canyons after centuries of continuous Cahuilla occupation.

No trace is left of his adobe. Even when it existed, it was entirely camouflaged by tangled grape vines and overhanging palms. Lizards ran over the roof. Ravens thunked in the fronds. Andreas cultivated fig trees with creek water and made brandy with wild grapes.

In a time farther back than Andreas, Indians hunted pronghorn antelope and dodged grizzlies and jaguars in the canyons. The paniktum report tells us Andreas Canyon had a greater variety of plants than anyplace in the region. Wildlife was plentiful too. Deer, Gambel’s quail, and bighorn sheep came to drink from the streams.

When the villages were thriving, early irrigation ditches carried creek water to fields of corn, melons, and pumpkin. Indians worked the earth with plows made of mesquite wood. There was plenty to eat: game, mesquite flour, agave, larvae, honey, and rattlers — roasted and boiled.

Along with food and water, the canyons supplied beauty and shelter in the form of the Washingtonia filifera palm trees. A desert palm oasis — water, rocks, palms — is one of the most perfect collaborations in nature, as the Indians well knew. Bean tells us the clans each claimed their own palm groves, and Indian families owned individual trees.

If you get out of your car today and walk up Andreas Canyon, you’ll likely be impressed by the resounding peacefulness. But the Indian Canyons were not always so peaceful.

Europeans trickled into the area in the 1800s, foreshadowing a struggle for control of this natural wonder. One of the earliest visitors, Paul Schumacher, came in 1870 to hunt for baskets. He was followed by anthropologists David Prescott Barrows around 1900, then Alfred Kroeber, Lucille Hooper, and William Duncan Strong. The legendary photographer Edward Curtis photographed Andreas Canyon in 1914.

On the heels of the anthropologists, relic hunters poured into the land of the panik to bag pottery — a practice that was then legal. Author J. Smeaton Chase camped for three months at Andreas in 1919, advertising the allure of the “tropic multitude of palms” to the nation.

In the late 1800s, white settlers began to divert (or steal) water from Andreas Creek, killing the crops by the bent palm. At the same time, water was being diverted from nearby Tahquitz Canyon. A smallpox epidemic in 1863 sickened and killed many resident Indians.

Amid these threats, Salton Sea waters rose and the leaders of the Ghost Dance (a religious movement that predicted a purging of whites from native lands) foretold a major flood. At least one local prophet saw a link between the prophecy and the filling of the Salton Sea. Stolen water, rising water, drought, crop failures, hunger, and sickness all alarmed the panik.

But that wasn’t all. Beginning in the 1920s, non-Indians tried to claim the oases for a national park or a private tourist destination. By now, it was obvious the place was a goldmine for tourism. During the 1923 season, some 30,000 people visited.

When early entrepreneurs started to bring carloads of tourists into Murray, Andreas, and Palm canyons, the tollgate was the tribe’s only way of retaining control. To make the most of the 25-cent entry fee, crafty tour leaders packed multiple passengers into a single car. The tribe caught on to the practice and tacked on an additional 10 cents per passenger.

Palm Springs Chamber of Commerce objected and tried to seize control of the canyons. When the tribe pushed back, the chamber had tribal leaders arrested; and the U.S. government temporarily took control of the gate and the land.

“The tribe ultimately prevailed by ‘playing by their rules,’” says Jon Fletcher, archivist for the Agua Caliente Cultural Museum. “Hiring attorneys was a major first step; political activism on the part of tribal members was also key.” The conflict gave the tribe valuable lessons in how to fight back. They didn’t stop, ultimately, until they gained sovereignty.

Andreas Canyon ends abruptly at the fence of Andreas Canyon Club, an enclave of hillside houses dating to the 1920s. For a longer walk, you can take Murray Canyon Trail. Or drive back up the main road, past the old gas station to your right, through the split rock, and past the “tin house” (on your left) where canyons ranger Cruz Siva once lived. Park at the Trading Post. You can almost walk out on the sea of palm crowns before you.

This canyon, the divide between the Santa Rosa and San Jacinto mountain ranges, claims the largest grove of wild palms in the world. (A different clan, the kausisktum, lived here.) The dreamy setting has inspired everyone from artists to musicians to writers. Zane Grey’s Wanderer of the Wasteland and Joseph Wambaugh’s Fugitive Nights include scenes from the canyon. The Doors’ Jim Morrison roamed here with German model Nico.

In 1938, a movie crew imported palms to create a faux jungle for a Dorothy Lamour film, Her Jungle Love. Later, in The Satan Bug, government agents tracked a deadly virus set loose in Palm Canyon Creek. Three years before Easy Rider, bikers tore up the canyon in The Wild Angels, starring Peter Fonda.

When Rocky Toyama came to work here as a ranger 13 years ago, the Indian Canyons were wild in a different way. With no rangers to patrol, scavengers had taken over the place. “Herpers” (amateur herpetologists) hauled away ice chests full of lizards. Weekenders loaded rocks and cactus into their trucks to sell or decorate their back yards. “The barrel cactus was a prize,” Toyama says. “That’s why you don’t see them near the road anymore.”

Toyama’s Hawaiian heart resonated with the indigenous story of the canyons and he became its protector, a true successor to Captain Andreas. He ground graffiti off the palm trees and hauled out picnic tables placed on tribal land by a local equestrian group. The tables were installed by helicopter, but — because the tribe didn’t have a bird — they went out on Rocky’s back.

As you’re leaving, take a minute to imagine Captain Andreas’ last days in his adobe. It had to be hard to be the last to go. But as the 1800s wore on, it must have been lonely, too. The kids that once played in the creek were gone. Women no longer pounded mesquite beans on the rocks.

Andreas left for the last time in the late 1800s and died soon after. When J. Smeaton Chase arrived in the 1900s, he was pleased to find some of the captain’s old fig trees bearing fruit.

Today, if you look hard enough, you can find one fig tree left behind by the last Indian in the canyons. Chase left us with this fitting farewell: “Peace to your ashes, Andreas.”