Bikram Yoga Plus – Palm Springs will mark its grand opening with an all-day celebration on April 26 with a ribbon cutting, free fitness classes, and food catered from Wildest Greens.

The ribbon cutting with Palm Springs Mayor Robert Moon will be held at noon. The entire day will be dedicated to Denise DuBarry Hay, the founder of Bikram Yoga Plus, which has locations in Palm Desert and now Palm Springs. DuBarry Hay passsed away last month at age 63.

“This is an opportunity for us to celebrate the beautiful, happy place Denise created and honor her inspirational lifestyle she infused into our community,” said Annmarie Lynn, co-owner of Bikram Yoga Plus – Palm Springs.

The celebration and tribute will be a red carpet affair and offer complimentary fitness classes all day with 15 different instructors and live deejays. Wildest Greens will offer a variety of cold pressed juices, kombucha, crudités with turmeric hummus, vegan sliders and other delicious, organic treats. A slide show will loop continuously to show the renovation work that DuBarry Hay and Lynn took head-on and hands-on for nearly two years to create the Palm Springs location.

DuBarry Hay was an entrepreneur and successful actress and producer. With her husband, Bill Hay, DuBarry Hay founded Thane International, one of the leading global direct response marketers in the world. DuBarry Hay opened Bikram Yoga Plus – Palm Desert in 2008. She also founded the fresh, organic restaurant Wildest Greens, located in Palm Desert.

Lynn is a certified Bikram Yoga instructor who was taught by Bikram Choudhury, who developed the unique yoga practice of 26 postures in the 1970s. She is a former gymnast who found life-changing pain relief after practicing Bikram Yoga for less than three months. Since then, she has dedicated her life to helping others find the same healing through the practice of yoga.

Bikram Yoga Plus – Palm Springs, offers two rooms for hot and cooler  temperature classes. In the 6,000 square-foot space, instructors lead classes in Bikram Yoga, which is traditionally a 90-minute practice in a 105-degree room with 40 percent humidity, as well as classes of Hot and Warm Yoga, Slo Flo Vinyasa, Yin Yoga, Trapeze Yoga, Chair Yoga, Booty Barre, Inferno Pilates and more. In addition, the Palm Springs studio features two maple wood rope walls for classes that include inversion and other therapeutic yoga poses that use the traction of the ropes to safely stretch and strengthen the spine. 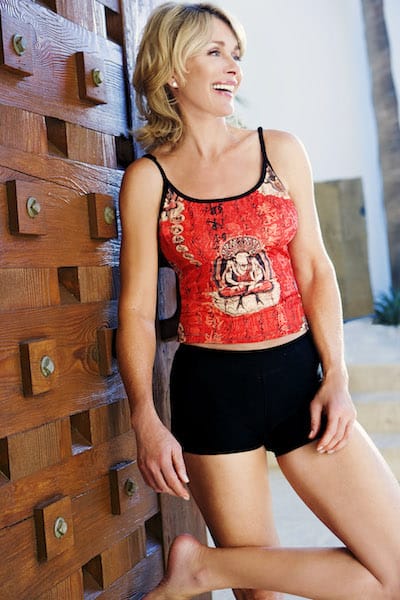 The studio includes the same unique padded, sweat-proof floor installed at the Palm Desert location – the only other moppable floor like it in the area. The Palm Springs location also offers a state-of-the-art steam room, well-appointed locker rooms, a shopping boutique, plus private yoga and massage options.