Billie Jean King, tennis icon who used her athletic achievements as a platform to champion social change and equality, recently was honored at the 11th Annual Annalee Thurston Award Reception.

Raising over $100,000 to benefit The Love & Love Tennis Foundation of the Coachella Valley, this special reception and dinner was emceed by tennis great, Pam Shriver, and held at the Indian Wells Tennis Gardens. A silent and live auction followed dinner, featuring a surprise doubles match with tennis greats Martina Navratilova and Gigi Fernandez, won by Gary and Barbara Tolman, who bid $20,000 for this once-in-a-lifetime experience.

For more than 35 years, Annalee Thurston was part of the women’s tennis boom that began in the 1970s with the Virginia Slims Circuit. Thurston worked with Billy Jean and Larry King for over a decade, becoming a loyal friend to both, as well as an integral part of their various tennis ventures. In 1984, Thurston was recruited by Philip Morris as a senior consultant to the groundbreaking Virginia Slims Legends Tour. 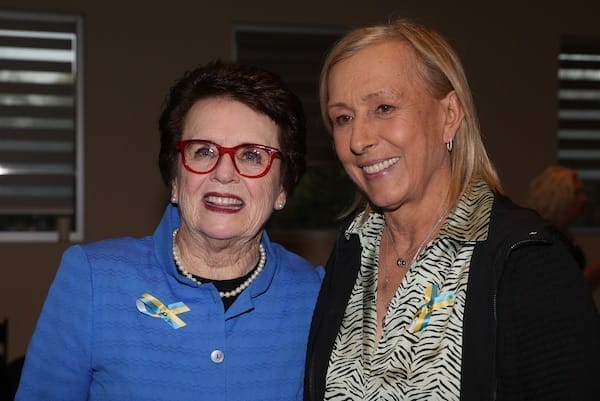 Billie Jean King with fellow tennis legend Martina Navratilova.
The Annalee Thurston Award honors and acknowledges exemplary women who have achieved the highest level of success in the field of business and sports. King is a tennis Hall of Famer, a pioneer of women’s tennis, and recipient of the “Medal of Freedom” from President Barack Obama, the nation’s highest civilian honor. What people remember most about King is “The Battle Of The Sexes” in 1973, when she defeated Bobby Riggs at the Houston Astrodome.

“Our Foundation is proud to present this Award to longtime friend, partner, and mentor Billie Jean,” said Rosie Casals, tennis Hall of Famer and co-founder of The Love & Love Tennis Foundation. “Billie is a champion in all facets of her life, inspiring change for inclusion for all and finding ways to improve the human spirit. We are all inspired by what and who she is, and would like to thank her for her generosity, and for being here to accept this award in person."

Established in 2015, by Casals and Tory Fretz, the foundation’s mission is to promote, support, and offer financial grants to youth tennis organizations, academies, foundations, schools, or individuals who promote the growth of youth tennis. The foundation also assists in developing juniors who participate in tennis tournaments and aspire to become collegiate or professional tennis players. 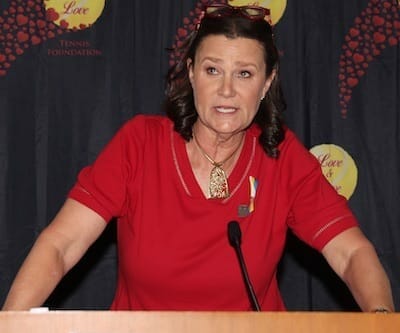 “The work the foundation does here is so needed and inspiring,” said King.  “Rosie Casals and Tory Fretz are making a huge difference in the lives of so many children, and they are doing it through tennis. I am honored to be recognized with this award because it is special, due to the fact it represents the best of women and their accomplishments. Annalee was a dear friend from my hometown of Long Beach. This award is a wonderful way to celebrate her legacy by someone who was loved by all.”
“Whether you call her “BJK” or the “old bag,” it would be very hard to fill her shoes,” said Fretz.  “Not only was Billie many times a tennis grand slam champion in singles and doubles but, more importantly, she inspired and led the women’s movement around the globe for equal rights and civil rights. She also showed support for the new LBGT youth foundation building in Los Angeles made possible by Anita May Rosenstein. She is a visionary and trailblazer doing good things for women, but also doing good things for humanity. Billie loves working with today’s youth to build a better tomorrow, and never turns down a youngster with a passion to learn and better themselves I remember in one of our chats years ago, I asked her what she would like to do after tennis? She replied, “President of the United States would be ok!” 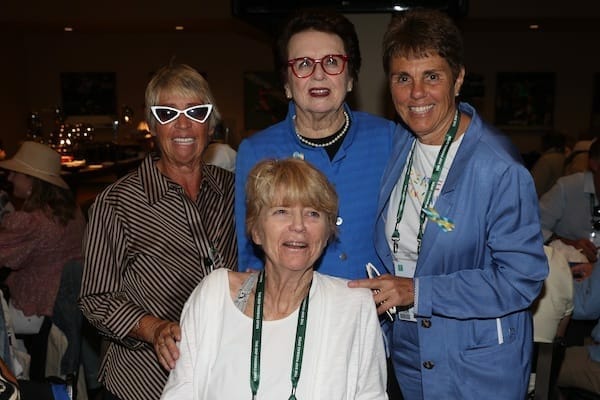