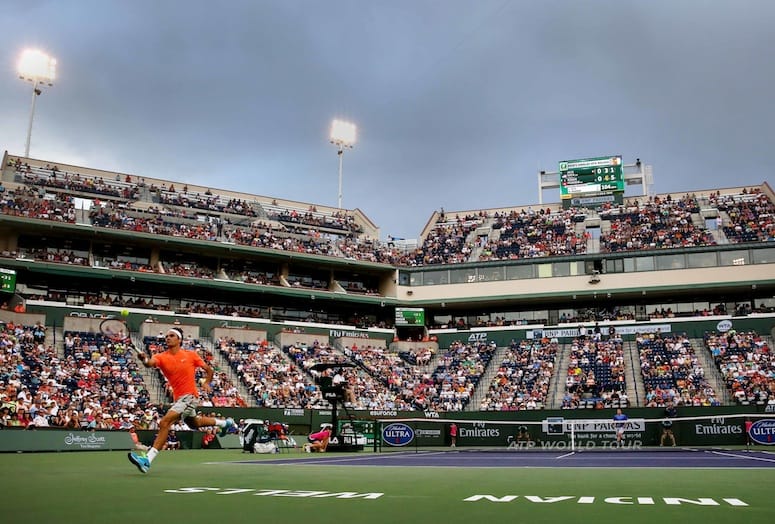 One of the biggest sports spectacles in Southern California – the BNP Paribas Open — is there for the taking with a variety of free events available to bring the tournament experience closer to fans.

The largest combined ATP World Tour Masters 1000 and WTA Premier tennis event in the world begins March 7 at the Indian Wells Tennis Garden. Some pre-tournament events are free and while the event is being played, multiple stadium grounds events are complimentary with your paid admission. The tournament runs through March 20. March 5: From 1-4 p.m., free activities both on and off the court at Indian Wells Tennis Garden for all ages. Clinics, prizes, and player appearances are scheduled.

March 7-8: Play begins, free admission: For the first two days, March 7 and 8, starting at 11 a.m., there is no entry fee and for the first-timer, here's a chance to scout out the grounds, check the venues, decide which dining option is best (no reservations accepted) and witness the main draw for the women's (March 7) and men's (March 8) field being set up live at 3 p.m. at Stadium Plaza. Pull up an adirondack chair and see which players will gain top billing as they are placed on the giant digital screen.

March 9: Paralympic competition in between matches 3 and 4 on Stadium 1. Top-ranked wheelchair tennis players show skills and information will be available about the Tennis Garden's new weekly wheelchair clinics.

March 11: Salute to Heroes presented by the City of Indian Wells. A moving and colorful ceremony recognizing veterans, military personnel, police and firefighters follows the first evening session match on Stadium 1. All veterans and current military, police and fire personnel receive two complimentary tickets for the evening session with ID at any of the box offices. Tickets: Day session tickets are permitted starting at 10 a.m. for a scheduled 11 a.m. first match. Evening session tickets are allowed through the gates at  4:30 p.m.  (Stadium 1 admission may be delayed if the day session runs late.) Daily Loge and Grandstand tickets for Stadium 1 range from $20 for a Grandstand seat for the first Thursday evening session to $70/$110 for Grandstand/Loge seats for the final weekend.  In Stadium 2 lower bowl seating, prices begin at $150 while reserved seating in Stadium 3 start at $90. Every ticket provides access to the day session General Admission sections of Stadiums 1-9. For information: 1-800-999-1585 Parking: General parking is located in the (G) lot off Miles Avenue. Parking is $20 per car, per entry. For day sessions only, if you leave and want to re-enter before 4:30 p.m. you may re-enter at no additional charge by checking with a parking attendant before exiting (If re-entering after 4:30 p.m., additional fee applies). For those with a Valet parking pass (V) will park in the lot located on the East side of the tournament site (V) and is accessed from Washington Street, VIP Self-Parking with a "B" Parking pass is accessed from Warner Trail. General Disabled Parking is available at the South Miles "G" lot.  Patrons who use a wheelchair will be directed to the “WC” Parking Lot adjacent to the North Gate entrance.

Find Your Car: A car locator is also available on the BNP Paribas Open app.

Upwardly Mobile: Charging stations in the Sports Bar, around shade structures and adjacent to Stadium 2 allow you to keep up with the action all day. You can live stream some practice courts and while onsite, follow other matches as to not miss a point.

On-site Dining: Nobu, Piero’s PizzaVino, Chop House and Sports Bar. There are other food options throughout the venue.