Bob Gentry thought he’d broken up with the idea of being a professional musician — “It was like an ex who hurt me so bad,” he says.
PHOTOGRAPHS BY NATE ABBOTT

Bob Gentry, worn down from chasing his dream as a musician, came to the desert searching for a new identity. The singer-songwriter relocated from Los Angeles and was ready to drop his guitar pick and find a steady job.

“I was hitting 40 and thinking, ‘Should I be doing this?’” he says. “I don’t want to be that old guy who’s still trying to make it in music.”

He had turned his part-time photography gig into full-time work, focusing on modern architecture in Palm Springs, including the Elrod House and the homes of Jack Benny and Suzanne Somers. He thought he’d broken up with the idea of being a professional musician — “It was like an ex who hurt me so bad,” he says — when a matchmaker happened onto his Facebook profile.

“I hadn’t told anyone here about my past,” Gentry says, “and out of the blue, I got a message from someone saying, ‘Do you have any new music?’ So, I sent him some stuff.” That someone turned out to be Kirk Pasich, co-founder of L.A.-based Blue Élan Records.

Gentry immediately felt the guys “really cared about the music,” and their roster of talent impressed him.
He has since recorded the new EP Back on the Horse, slated for release in January 2021, with Grammy-nominated producer Dave Darling and performers such as Jackie McLean of Roan Yellowthorn.

GENTRY’S SOLO CAREER in the early 2000s had many high points. He toured with Rod McKuen and David Tyson, who wrote “Black Velvet” for Alannah Myles, and opened for Heart, The Pretenders, and Ringo Starr at the Greek Theatre in Griffith Park.
Growing up in the suburbs of Detroit in a musical family (“My stepdad was an amazing bluegrass banjo player”), Gentry became a Beatles fan at age 5 when his stepfather gave him a copy of A Hard Day’s Night. “I was hooked,” he says, “living through the 1960s in the ’80s.”

He played around on the keys “because a piano was always there,” he says, and picked up an acoustic guitar in junior high. The guitar was “cooler” and “a lot easier to carry around than a piano.”
In high school, writing lyrics allowed shy-kid Gentry to deliver a message without speaking. 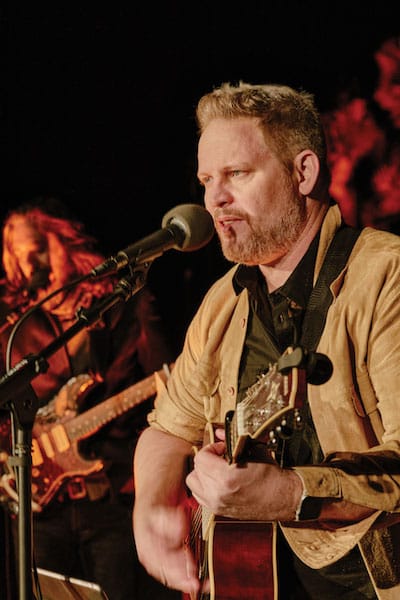 “Honestly, at this point in my life, I’m just so grateful for a second chance at doing music.”

In his 20s, he formed the grunge-rock band Moisture, which played Detroit’s club circuit and left him craving “to do music for real.” The other four members were less eager to take things to the next level, so he left for Orange County, California, and revived Moisture with new members. With an older EP already in hand, they had a ticket to the local music scene and created a repertoire that landed them a deal in Hollywood.

“There was an A&R guy from Universal [Music Group] at our CD release party who took it to the head of the label,” Gentry recalls. The next day, they put the band on TV and signed them.
Then came 9/11.

“Everything just stopped,” Gentry says. “Napster came out, and no one knew how to sell music. It was a strange time, and the deal just vanished. We self-destructed.”

He strummed on for a while, enjoying his independence and writing songs that were “more literal, relatable” to his audience.

WITH BLUE ÉLAN RECORDS, Gentry has produced about 18 songs. “I’ll send Dave [Darling] little things like this,” he says, strumming his Yamaha acoustic and acknowledging his producer’s knack for turning his melodies into magic.

Gentry always starts with a melody. Then, he lays down lyrics. He has a wide vocal range and a mostly smooth sound — like Cat Stevens meets Harry Nilsson, Darling describes. Gentry believes inspiration comes from anywhere, at any time, and never forces creativity or sets studio hours. 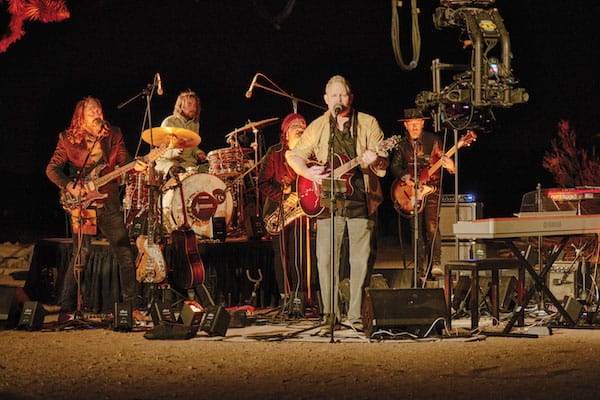 The guitar was “cooler” and “a lot easier to carry around than a piano," says Bob Gentry.

The latest EP includes new singles, including “20 Years to Life,” a quirky love song filled with legal jargon and a sound reminiscent of Jack Johnson’s folkie beach ballads. “My Mistake,” a duet with McLean, reimagines one of Gentry’s older songs.

With other titles, such as “Lean on Me” and “Now That You’re Gone,” one might assume Gentry’s songs are all about love.

“‘Lean on Me’ is actually a lust song,” he says with a chuckle, “but also about feeling insecure … liking someone and not knowing if they feel the same … reading mixed signals … feeling old.”
The other song he wrote the day of his father’s funeral; it was his way of achieving closure.

“I admit, I feel uneasy when people ask who or what my songs are about,” Gentry says, suggesting he’s not hiding behind his music; he wants people to have their own interpretation and connect with the songs in their own way.

While he awaits the opportunity to tour again, Gentry continues writing songs and reaching his audience through social media.

“I miss the energy of a crowd,” he says. In October, he played an intimate show at Rimrock Ranch in the High Desert, and there is talk of a concert in nearby Pioneertown. “Honestly, at this point in my life, I’m just so grateful for a second chance at doing music. It’s been surreal. I’m still pinching myself.”

• READ NEXT: Where to Experience an Outdoor Sculpture Garden in Palm Desert.