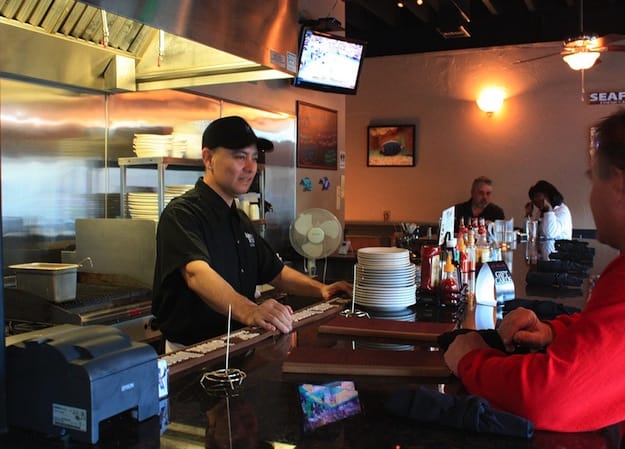 Ruben and Ozzy Lopez first learned the restaurant ropes while working under their uncle at the Beach House in Rancho Mirage.

“I was really shy,” Ruben said, “but my uncle pushed me to start talking to customers and start shucking oysters.”

Twenty-five years later, the brothers continue to heed their uncle’s advice. Only the setting has changed.

Over the years, Ruben said loyal customers who patronized their offerings at the Beach House and Shanghai Red’s in Palm Springs asked the pair when they would open their own restaurant.

Last fall, they finally did.

“Watching their talent, knowing how many years they have been doing this, it was all green lights to open their own restaurant,” said Ruben’s wife, Mara. “To see their life’s dream come together is very satisfying.

But what Ruben and Ozzy are best known for are their fish tacos, which Ozzy estimates they sell 200 to 300 each night. While the ingredients appear simple enough — beer-battered or grilled cod, cabbage, pico de gallo, white sauce and a fresh tortilla — Ozzy insists there’s a secret weapon.

With the kitchen located directly behind the bar, customers are treated to a front-row seat of Ruben and Ozzy’s passion for food. The brothers decided against a traditional backroom kitchen because it would have created a divide between themselves and the customers.

The duo intuitively picks up each other’s cues and they are often able to cook without saying a word. Watching them cook, Mara said, is incredible.

“We had a customer come in and as he watched them cook, he said it was like they were dancing,” Mara said. “And that’s really what it is.”

After working together for so long, Ozzy said the secret is to go with the flow.

The open kitchen also lends itself to creating anything their customers request. In fact, customer inspiration led to one of the restaurant’s most popular off-menu items.

“Fried oyster tacos were not on our menu,” Ruben said. “One day, a customer came in and asked if we could do it, and now it’s one of our most popular items. We’ll do anything as long as we have the ingredients.”