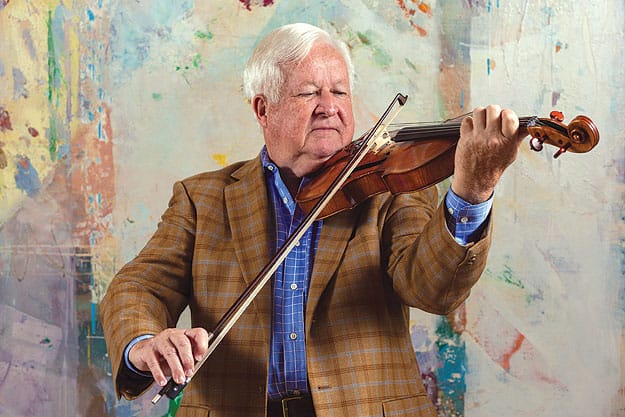 Donald McInnes plays a viola he had custom made to replicate a 1580 Gasparo da Salò instrument that had been loaned to him. He has worked with many famous artists. “I was really lucky to work with the three biggest talents as far as connecting with the audience: Jascha Heifetz, Leonard Bernstein, and Barbra Streisand.”
MARK DAVIDSON

Donald McInnes deplaned at Charles De Gaulle Airport in 1976 and saw a large banner promoting Leonard Bernstein’s concerts. When McInnes saw his own name on it as one of three soloists, he recalls, “I thought I had made it.” A master violist, McInnes retired from performing in 2009, but teaches at USC Thornton School of Music and Music Academy of the West (which in August bestowed upon him its Distinguished Alumni Award). Idyllwild Arts Academy buses students to his home in Palm Springs once a week.

After hearing Jascha Heifetz perform a violin concerto on the radio, McInnes, then 11, told his parents, “I am going to play just like that.” He subsequently studied with Heifetz and William Primrose. As a violist, he has performed under the baton of and with Yehudi Menuhin, Leonard Bernstein, and Yo-Yo Ma.

Did you come from a musical background?

My mother played piano. My father’s best friend in college was Glen Miller, and he played mandolin and guitar in Miller’s college band. There was no money in classical music at the time. My mother’s dream was [for me to play in] Lawrence Welk’s band because, she said, they pay you well, they give you a new car every year, and you don’t smoke.

When did you switch from violin to viola?

My senior year in college, a teacher called me on the day of a faculty concert and said the violist had come down with the measles. He said, “You are going to play.” I told him I couldn’t play the viola, and he said, “Come to my office and I’ll teach you in 10 minutes.” Later, he said, “As a violinist, there’s nothing special in your sound that’s going to set you on top. I hear something in your viola sound; you could be world famous.”

How did you connect with Leonard Bernstein?

In 1971, I was one of the winners of the national Ford Foundation competition. The winners received $5,000 cash and $5,000 to go to a major American composer to write a new piece for you. … I chose William Schuman and did the world premiere of his concerto with Michael Tilson Thomas and the Boston Symphony in 1974. Bill was good friends with Leonard Bernstein. … When Lennie heard [the Boston recording], he said he wanted to do it the next year with the New York Philharmonic. We did four performances and a recording for Columbia Records. Later at an after-concert party, I was sitting with Lennie. He said during the performance he had a dream of me playing Berlioz’s “Harold en Italie,” which he was conducting in New York and Paris in 1976.

What have you done besides classical music concerts and teaching?

I played in the studios for 25 years when I lived in L.A. I did 80 movies a year, including Finding Nemo, Pretty Woman, Titanic, Fourth of July, Little Mermaid, and Red October. I was the principal violist for Barbra Streisand for all her tours and recordings and movies from 1985 to 2000. She was wonderful to me.

Listen to a sound track.