After selling out her Jan. 29 show at Agua Caliente Casino Ranch Mirage, a second show was added for Jan. 28.
PHOTOGRAPHS COURTESY CAROL BURNETT

Any inveterate fan of the universally lauded The Carol Burnett Show — which ran on CBS from 1967 to 1978, earned 25 Emmys, and routinely pulled in 30 million viewers — knows it opened with a short Q&A session during which the star would answer random questions from members of her studio audience.

“At first, I didn’t want to do it,” says Burnett, 88, calling from her home in Santa Barbara. “I didn’t think I could. But my executive producer said, ‘You know, Carol, it’s important for the audience to get to know you as you before you start putting on those crazy wigs and fat suits and blacking out your teeth.’ So, I bit the bullet. At first, I was nervous, so he said, ‘We’ll put some plants in the audience.’ I thought about it and said, ‘No, because if I can’t answer something, it’ll be honest, and the audience will know it’s truthful.’”

Almost 45 years after submitting to her final televised interrogation, Burnett —  who’s won the Tony, the Grammy, six Emmys, a pair of Peabody Awards, the Presidential Medal of Freedom, a Kennedy Center Honor, and the Mark Twain Prize for American Humor — is at it again in An Evening of Laughter and Reflection, the 90-minute, one-woman show she’s bringing to The Show at Agua Caliente Resort Casino Spa in Rancho Mirage on Jan. 28–29.

“I open it by showing about seven or eight minutes of some of my favorite Q&As I did on my show to get the audience ready and in the mood,” says Burnett, adding that she also intersperses a variety of cherished clips from the original variety series throughout the evening. “Then I just come out, bump up the lights, and say, ‘Okay, anybody got any questions?’”

Burnett is no stranger to the Coachella Valley. Her sister Chrissie once lived in Palm Springs, and her beloved Bob Mackie — the venerable costume designer whom Burnett estimates created some 17,000 ensembles for The Carol Burnett Show — still does, as do many of the dancers who worked on the series. 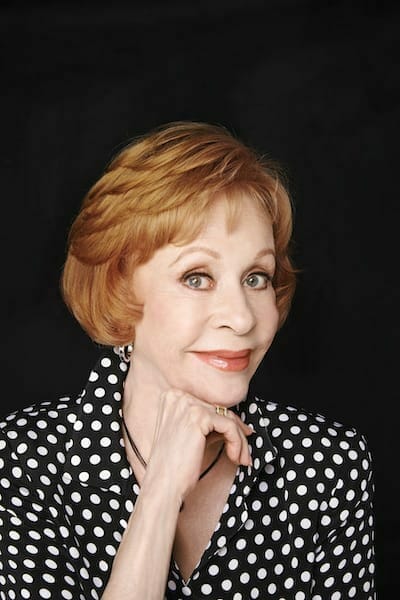 I have no regrets [about my career] because I’m happy with where I am."

What do you like about the Q&A format of your stage show, which relies on audience participation?

I fly without a net, and what it does for me is it keeps the old gray matter ticking. I have to be on my toes. I can’t be thinking about what I did yesterday or what I’m gonna do tomorrow. I have to be in the present moment. Some of the questions are repeats: “Why do you pull your ear?” “Would you do the Tarzan yell?” “How did you discover Vicki?” So, I have set stories I can tell about those. But I always look forward to getting a question I’ve never gotten before. That’s the fun of it.

The Carol Burnett Show was a magnet for the top stars of the era. If you were still doing it today, who are some of the guests you’d want on it?

Meryl Streep, because not only is she a great actress, she’s very funny and she sings up a storm… Kate McKinnon. I would love to work with her. Kristen Wiig. I’m thinking a lot of the female comedians. And then some of the old stalwarts: Steve Martin, Marty Short, really wonderful sketch performers.

I don’t remember Barbra Streisand being on your show. Was she asked?

No, she wasn’t asked. I don’t know why [laughs]. I figured she was just too busy.

One Oscar contender this awards season is Aaron Sorkin’s Being the Ricardos, about your friend and mentor Lucille Ball and her husband, Desi Arnaz. Would you ever want such a movie to be made about your life and if so, who would play you?

[Laughs] Oh, I think Angelina Jolie would be perfect, don’t you? [Laughs] No, not really… There is a movie in the works about me and my daughter, Carrie, based on the book I wrote about our relationship, Carrie and Me: A Mother-Daughter Love Story. The co-producers, with me, are Tina Fey and Steven Rogers, who wrote and produced I, Tonya.

You’ve had a great career. Anything you didn’t get to do — a show business regret?

I have no regrets because I’m happy with where I am. I remember, way, way back when I was first in New York and auditioning for — I forget what it was, chorus or something in a Broadway show. It had narrowed down to me and another girl. I thought I had it. I thought I had the job. But I didn’t. She got it. You know what saved me from being disappointed? I don’t know how this came about, but I’m grateful for it. I said to myself, “You know what? It’s her turn. It’s not my turn. It’s her turn.” I wasn’t discouraged because I figured, “OK, my turn will come sooner or later.” And it did.

One of my favorite sayings is “artists don’t retire.” Do you ever ponder retirement?