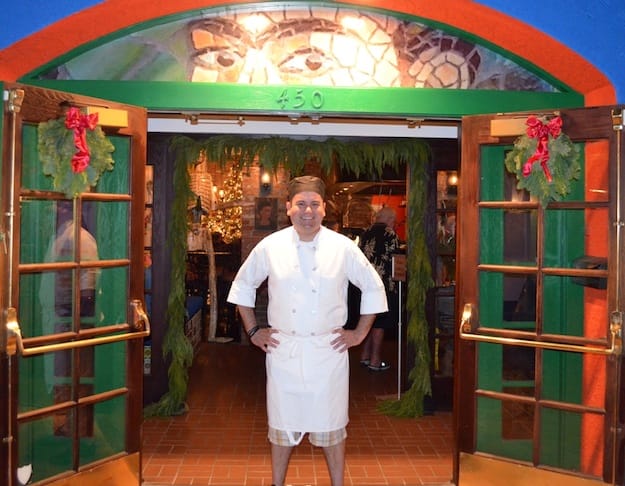 Although Victoriano Rodriguez will tell you his mother and grandmother are his primary influences, it was his father who first encouraged him to take a culinary path.

The moment happened over banana bread.

Rodriguez made a loaf and when his dad tasted it, he looked at his son and told him, “This is what you’re supposed to be doing.”

That path has led to Rodriguez recently opening Casa de Frida on South Palm Canyon Drive in Palm Springs. A Palm Springs resident since 1998, Rodriguez has worked as a professional chef at several Coachella Valley establishments and private country clubs. He also ran his own private catering business, No Surprises, which specialized in VIPs, celebrities and local socialites.

Matt Naylor, a local businessman and one of three partners for Casa de Frida, said the venture has been Rodriguez's dream in the making for about eight years. When the property and location came together, Rodriuquez knew it was the right time to take the leap.

“He’s got a gift with food,” said Naylor. “When people eat his food, they want to know what’s in it. His flavors and spices are distinct.”

Casa de Frida tantalizes and intrigues the minute you walk inside. Vibrant colors, dramatic Day of the Dead decorations, and images of Frida Kahlo, the restaurant’s namesake, fill the bar and dining room. No sombreros and serapes hanging on the walls here. Rodriguez, known as Chef Victor, decided on a more sophisticated ambiance to serve his “Artisan Latino Cuisine.”

Casa de Frida’s menu is inspired by his family’s French, Spanish, and Mexican heritage. The Chef’s unique fusion of Mexican and French cuisine is evident in his Barbacoa entrée, for example, which he describes as a Latino version of the French classic Beef Bourguignon.

Originally an art student, Rodriguez exchanged his artistic tool box of canvas and paints for the ingredients of his childhood cooking memories – herbs, spices, fruits, vegetables, meats and fish.

“We all have something we’re good at, whether painting or cooking,” says Rodriguez. “We are artists, even though we’re not making two million dollar paintings. Everything is handmade from scratch.”

A passion for fresh ingredients grew out of his grandmother’s vast fruit and vegetable garden in their hometown of Los Mochis, Mexico. “When all you have to do is walk outside your door and grab whatever you need,” he said, “that’s fresh.”

His grandmother was a vegetarian, Naylor noted, so she learned how to create amazing flavors without meats and passed it on to Rodriguez.

Rodriguez said he plans to create seasonal menus items about every three months. He will also experiment with menu items for Sunday brunch when, aside from his regular brunch dishes, he will offer different “free style” dishes from week to week.