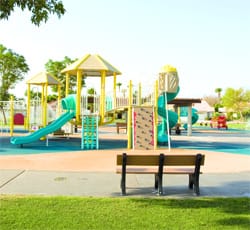 Cathedral City — celebrating its 25th anniversary this month — is experiencing dynamic change and strategically planned growth, with environmental responsibility at its foundation.

The city’s centerpiece, the 70-acre Downtown Core and adjacent Pickfair Promenade, is fast becoming a dining, entertainment, and community destination for Coachella Valley residents, and, visitors, alike. Now “dinner and a movie” offers attractive options in downtown Cathedral City. Trilussa Ristorante, Mad French Lady, and Buddy Greco’s Dinner Club have joined old-time favorites The Red Tomato and El Gallito. Big Mama’s will add a Cajun barbecue flair to the Desert IMAX Theatre complex this fall. Cathedral Towne Villa Apartments, surrounding the Mary Pickford Theatre, is leasing to young professionals, seasonal residents, and seniors. For new tenants, the lure and attraction to the development is the convenient location to the Downtown and many city amenities.

A grant from the California Department of Water Conservation helped pay for a new irrigation system that uses sensors to prevent overwatering. Drought-tolerant plants, pavers, rocks, and boulders were installed along the park’s perimeter.

A majority of materials used throughout the park were made from recycled materials, including glass, rubber, and plastic. The play area’s soft surfacing is made of 100 percent recycled rubber from California tires. “We obtained funding for this part of the project from the California Integrated Waste Management Board Tire Grant because of Cathedral City’s promotion and support of the environment,” explains Deanna Pressgrove, Environmental Conservation Manager.

athedral City school children provided artwork for the side panels of the new trash containers. Typically, park trash receptacles are large, round containers that are easily vandalized. To alleviate that potential, Pressgrove located containers on which artwork could be incorporated. The city sponsored an Earth Day poster contest at local elementary schools for the receptacle panels, and its Public Arts Commission selected seven drawings from 75 entries.

The children’s artwork focused on environmental protection and its impact on their future. Messages included “It’s Up to You Keep Your Park Clean,” “Put Waste in its Place,” and “Help Me Live a Better and Cleaner Life.” The project’s aim is working. “Since we installed the new trash receptacles with the children’s artwork, not one has been vandalized,” Pressgrove says. “It instills so much pride in the children and their families to actually see their artwork displayed at the park.”

The Cove Improvement District, the largest public works program in the city’s history, is quickly moving forward. The assessment district was formed June 2005 in to pay for sewers and street improvements to comply with a state law prohibiting the use of septic tanks after Jan. 1, 2012. Not only does the $38 million project eliminate 1,500 septic tanks, but it also includes new paving and curbing, replacing the original streets from the 1950s. These major infrastructure improvements will provide environmental benefits and improve quality of life in the Cove.

The first phase of construction on the Cove’s residential area began this past summer. Approximately $7 million in grant funds have been awarded to the project. The Cove Improvement District will pay the remaining cost of $31 million over a 30-year period through property tax assessments.

When the city recently completed a $6 million sewer project in the 35th Avenue Assessment District, the neighborhood improved dramatically. Not only were streets easier to drive on, but new curbs added street appeal, and residents responded by cleaning up, repairing, and enhancing their properties. “There was such a dramatic visual change with the new streets and curbs, residents found a renewed community pride, inspiring property makeovers and enhancing curb appeal,” Bayne says. The results were similar in the Dream Homes area following a $5 million sewer program.

As these projects show the city’s commitment to its future, Cathedral City can look forward to taking its place as one of the premier communities in the fast-growing Coachella Valley.