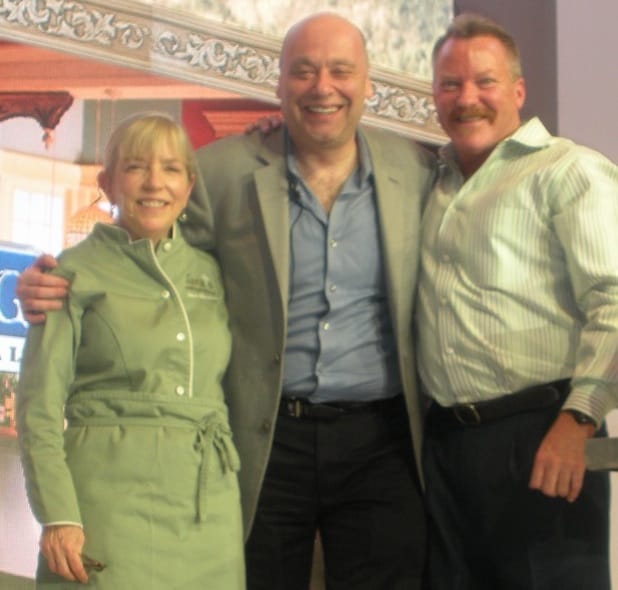 Sara Moulton wasn’t sure if it could get any better than being a chef.

And then she discovered a gift for educating her cooking audiences about food.

“I’m a chef, and I think I’m probably a better teacher,” Moulton said. “Not that I’m a bad chef or that I make bad food, but I was combining my two loves. I thought, ‘Wow. This is so much better than just being a chef.’”

She brought her engaging style of connecting with her audiences to the recent Food & Wine Festival Palm Desert, participating in the Celebrity Chef Luncheon on March 22. Moulton demonstrated how the dessert portion was created as part of a four-course meal served to nearly 300 guests.

As if she were in the classroom, Moulton invited audience members to participate in each of her cooking demonstrations over the weekend, validating the hands-on persona that is the trademark of her work.

And it didn’t go unnoticed.

Jeff Hocker, executive producer of Food & Wine Festival Palm Desert, decided it was time to honor the teacher and chef with a lifetime achievement award.

“He really surprised me,” said Moulton, who received a Baccarat decanter. “It was lovely. That’s probably the nicest thing I have in my house now.”

Hocker brought up her long time Gourmet Magazine colleague, wine expert Michael Green, who worked with Moulton during the early part of her career.

“One thing I realized about Sara right away when we worked together at Gourmet Magazine is that she is a natural teacher,” said Green.

Hocker said Moulton has already achieved a lifetime of accomplishments in her still evolving career, including putting the Food Network on the map.

“Giving Sara an award like this not only recognizes her efforts and achievements, but it motivates her to continue to share her experience by giving back to people in a way only she can do,” Hocker said.

In addition to recognizing Moulton, Hocker said Food & Wine Festival Palm Desert would celebrate its relationship with the Friends of the James Beard Foundation by donating a portion of the proceeds from the Celebrity Chef Luncheon. The $2,500 check will go toward a scholarship for an aspiring chef.