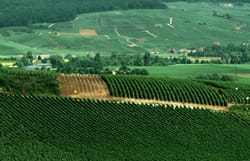 Americans are suckers for a good story: George Washington and the cherry tree; Benjamin Franklin and his kite; Alexander Graham Bell and his famed statement when he invented the telephone, “Watson, come here. I want you.”

The French also have a popular story involving a statement in the same vein as Bell’s: “Come quickly, brothers. I’m drinking stars.”

This quote supposedly came from Dom Perignon in 1690 when he “accidentally” invented Champagne. The brothers were his fellow Benedictine monks at the Abbey of Hauteville near Epernay. As the widely told tale goes, the bubbles were unintended, to-wit:

The northern French region of Champagne experienced a short grape-growing season, and there was insufficient time after the grapes were picked for the yeast in the skins to convert the sugar in the pressed grape juice into alcohol. Winter’s chill stopped fermentation, sending the wine into a hibernation of sorts. When the second round of fermentation took place in the spring, it created a buildup of carbon dioxide that became trapped in the bottle.

The first reference to bubbly wine, however, appeared much earlier — in 1662, to be exact, in a paper presented by Christopher Merret to the Royal Society in England. A medical doctor by trade, Merret explained how sugar and molasses were being added to still wines to make them sparkling. England was not a winemaking country at the time, but imported wine in casks, mostly from France, including Champagne. The advantage England had over France was its development of stronger glass that was able to withstand the pressures of trapped carbon dioxide.

Dom Perignon’s importance to the wine world, however, cannot be dismissed.

“Champagne wouldn’t exist without him,” says Charles Curtis, director of wine and spirit education for Moët Hennessey USA, the U.S. distribution arm of Moët & Chandon, which produces Dom Perignon Champagne. Moët, by the way, is not a French name. Though its namesake Claude Moët was born in France, his ancestry was Dutch. Thus the correct pronunciation is “mo-wet.”

According to Curtis, Dom Perignon (the monk) was the first to make white wine from black grapes, the first to blend grapes from different vineyards, and the first in the modern era to use cork stoppers. He also began using the stronger bottles developed by the English. Appointed treasurer of the abbey, he served as its cellar master for 47 years.

The oldest Champagne house was established by Nicolas Ruinart in 1729 to fulfill the ambition of his uncle, also a Benedictine monk. It was a ruling by King Louis XV the year before that really got the bubble rolling, so to speak, when he authorized the transport of wine in bottles (previously shipped only in casks).

The Ruinart family was in the woolen cloth business. Their first Champagnes were given to customers as a company gift. But as early as 1735, Champagne became the Ruinarts’ sole business.