The Sunday Night Chef Fight is back again, this time it will be the “Battle of Highway 111 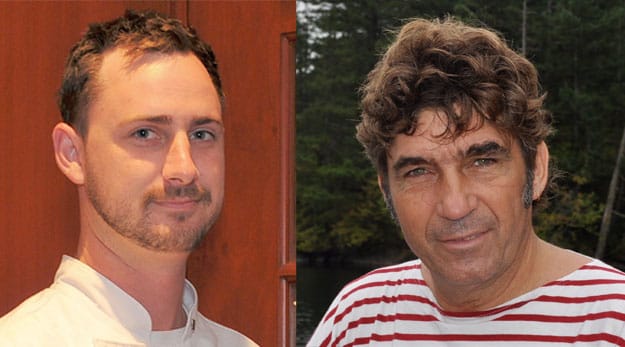 The Sunday Night Chef Fight is back again, this time it will be the “Battle of Highway 111,” pitting two outstanding Rancho Mirage chefs against each other for the title of Top Chef in the Coachella Valley. The new combatants are  Fleming’s Prime Steakhouse and Wine Bar’s Chef Partner David Burke and Wally’s Desert Turtle’s Executive Chef Pascal Lallemand.

The brainchild of Chris Kern, creator and founder of Forgotten Grapes, who will emcee and interact with the chefs as they work while fielding questions to them from the audience of food lovers and some critics. Kern produces fun series of live chef competitions all over Southern California has caught on in the desert and is an evening well spent.

The bell rings at 6 p.m. and the fisticuffs begin at the beautiful Standards of Excellence showroom, located at 70-190 Highway 111 in Rancho Mirage. Each chef emerges separately to flash his culinary skills in an attempt to be the evening’s winner. In the last Chefs Fight in July, Chef Andrew Copley won for the third time, becoming the first-ever member of the Sunday Night Chef Fights Hall of Fame and was awarded the trophy, which is only awarded to the chef that wins three consecutive times and then is ineligible to compete again.

Upon graduation from Le Cordon Bleu in Scottsdale, Arizona, David Burke made the short hop to Phoenix, where he worked for the JW Marriott as a line cook, breakfast cook and in catering. He later made his way through the ranks of the Fleming’s group of restaurants, cooking for the chain’s San Diego and L.A. Live locations before becoming Chef Partner in Rancho Mirage. Pascal Lallemand was born and raised in France, where he attended culinary school. He has helmed the kitchen in restaurants throughout France and the United States, including The Saint Regis Hotel in Detroit, The Monte Carlo Restaurant in Dallas, the Land Office Restaurant in Aspen and the Parker Meridien in Palm Springs, before being appointed Executive Chef at Wally’s Desert Turtle.

Each Sunday Night Chef Fight is a fast-paced, no-holds-barred culinary showdown similar to popular cooking competition shows on TV, but with a few extra twists thrown in. Before each event, both chefs are given three base ingredients — a protein, vegetable, and grain/starch/dairy item — that must be included in their creations, a shopping allowance, and a week to plan and prep their dishes for the sixty members of the audience jury. Then, during the Sunday Night Chef Fight itself, each chef and his  sous-chef will have only 30 minutes to cook and finish samples of each dish for the entire audience as well as incorporate a last-minute “mystery ingredient” into the mix while host Chris Kern peppers him  with questions.

The audience/judges gets to sample each dish and rate each chef’s creations in three categories. Once the totals are tallied, the Sunday Night Chef Fight trophy and title of “Champion Chef of the Coachella Valley,” is awarded. The winning Chef has the opportunity to defend his or her title against a new local chef challenger at the next Coachella Valley Sunday Night Chef Fight, to be held on February 19, 2012.

Each Fight also includes an “undercard” bout Vino Vidi Vici, a blind wine tasting competition in which the audience tastes three themed but unlabeled wines, on their favorite, and then has the opportunity to purchase the wines they liked best. The name and varietal of each bottle is revealed over the course of the evening.