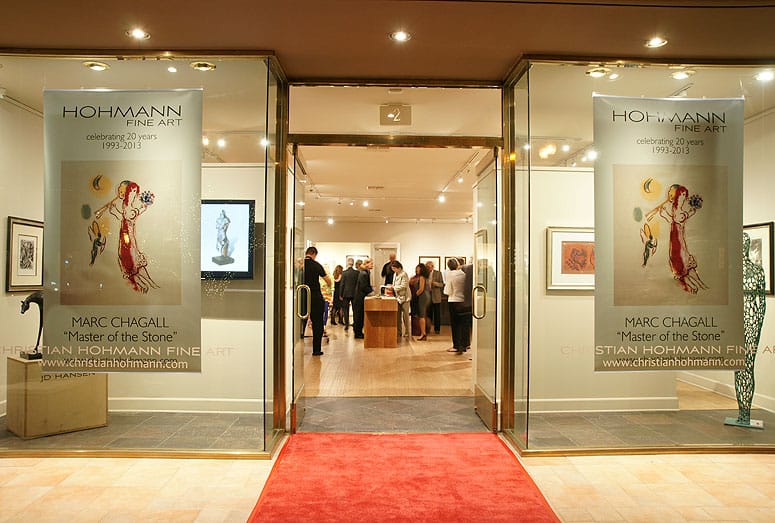 “I am so grateful for the warm welcome residents of this valley have given me,” explains Hohmann. “It seemed only natural to share my anniversary of a career in art with the opening of our gallery season and to do it with the work of an artist who has completely captivated the world internationally. Last year on the occasion of Chagall’s 120th birthday, the show that we are now presenting traveled the world. We are honored to be able to share it now with our patrons, collectors and community.”

Hohmann counts Chagall as a major turning point in his family’s history, providing the focal point to a 1999 show in which they experienced a breakthrough as major contenders in the international art world.

Today, Hohmann represents nearly forty years of lineage in the world that was founded in Germany when his parents Werner and Ursula opened their first gallery in 1976 in the cultural tourist destination of Walsrode. In 1998, his aunt Eva Hart ventured to the United States to open a gallery in Carmel by the Sea, where she introduced art collectors to the finest European contemporary artists.  Only two years later the Hart family opened a second gallery in the heart of Chicago.

Back in Germany, 19-year old Christian was honing his own career by studying art history and economics at the University of Trier. He also spent time working with acclaimed artist Prof. Rudolf Hausner, an important representative of the Viennese School of Fantastic Realism, to publish several important Fine Art Prints. In the fall of 1993 he founded his first company, Kunstverlag Christian Hohmann, his first company publishing fine prints by Hausner and several other artists. Two years later he opened his first gallery in Hamburg at 21. In 1998 he partnered up with Thomas Levy, one of Germany’s premier art dealers and gallery owners, to open a gallery villa in Hamburg-Poeseldorf. The gallery highlighted artists such as Joan Miro, Marc Chagall, Francis Bacon, and Xenia Hausner and participated in art expos including the Photo Triennale. Three years later, Hohmann collaborated on a project gallery in Berlin-Mitte.

In 2002 Eva Hart opened a 5,000 square foot flagship gallery in Palm Desert on El Paseo Drive. Christian joined his aunt as gallery director and went on to facilitate stellar exhibitions from modern classics like Jean Miro, Chagall, and Gabriele Muenter to contemporary artists such as Paul Wunderlich, Eberhard Hueckstaedt and Karin Voelker.

In the summer of 2009, the Harts retired and Christian decided to carry on the family tradition solo with a new signature space, also located on El Paseo Drive.

Today, Christian Hohmann Fine Art reflects on this rich legacy in the art world, which began in Germany twenty years ago almost to the day, and now spans across the United States. With a longstanding tradition of presenting both European and national artists of the highest caliber to the discerning collector, the gallery’s strong figurative program is accentuated by diverse offerings in 20th century master works by both familiar and emerging names. The gallery features an exquisite selection of original paintings and sculpture by over 80 unique artists while also representing many artists’ estates and publishing books and catalogs of important work. With a true passion for art, educating the client, and a devotion to its artists, the gallery has garnered a world-class reputation as a sophisticated destination for art.