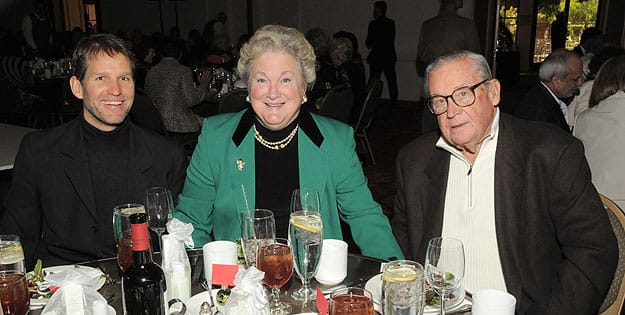 The City of Palm Springs paid tribute to Milt Jones, Owner/Publisher of Palm Springs Life magazine, with a special proclamation at this year’s 52nd annual St. Theresa Holiday Fashion Gala held at the Renaissance Palm Springs on Dec. 5. Jones, a long-time supporter of St. Theresa, was honored as the first time ever recipient of the school’s Dolores Hope Perpetual Guardian Angel Award.

In addition, the school paid tribute to Jackie Lee Houston, the late Palm Springs philanthropist who was a long-time supporter of the gala and a huge lover of fashion. A photograph signed by students was given to Jaimi Houston, Jackie Lee’s daughter, who accepted the memorable photograph on behalf of herself and the Houston family.

This year’s event, a holiday tradition in Palm Springs, kicked off at 10 a.m. with a fabulous silent auction followed by lunch and a glamorous fashion show featuring children’s styles from Macy’s Palm Desert and sophisticated haute couture from Beverly Hills designer Lourdes Chavez.

“Milt Jones is a true Palm Springs legend who has given back in too many ways to count,” Mayor Steve Pougnet wrote in the program. The city proclamation was presented to Jones by Mayor Pro-Tem Lee Weigel who is also a St. Theresa School parent. All agreed that Jones and Palm Springs Life were responsible for a great deal of the success of the school and the fashion event.

“Milt has been a supporter of St. Theresa School and our fashion show since the very beginning” Lynn Mallotto, the Gala’s long-time chair, said. “Let’s just say the fashion show wouldn’t have been the same without him and I can’t think of anyone in the Coachella Valley whose done more to publicize our school and our charity events than Mr. Palm Springs Life!”

Adding to the fun of the day was the youthful school choir whose members performed carols including “Silent Night”, the favorite of the late Dolores Hope. Also in attendance were some of the early “Whistle Table” attendees. Jones was one of the founding members of the “Whistle Table,” a group of notable gentlemen around town who every year attended the fashion show and would whistle at the well known local runway models, including Barbara Marx Sinatra, Nelda Linsk, and Suzy Johnson. Early Mission Hills Country Club developer Max Genet was among original “Whistle Table” attendees present.

All funds from the annual St. Theresa School Holiday Gala will go to the school’s Education and Scholarship Fund.