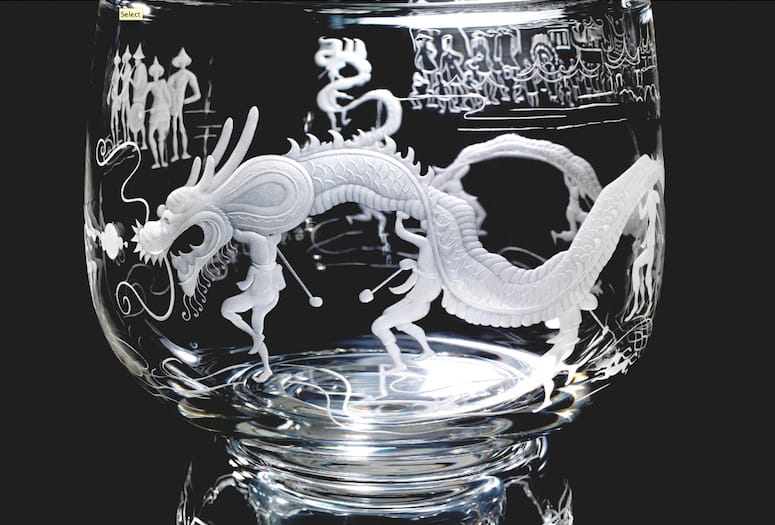 In 1971, Walter and Leonore Annenberg’s carefully chosen Christmas gift to President Richard Nixon was a symbolic piece of Steuben crystal. Skilled in the nuances of gift giving, they saw the glistening Star of the President as a fitting recognition of the commander in chief, under whom Walter served as Ambassador to the Court of St. James’s (United Kingdom) from 1969 to 1974.

Only months earlier, the couple’s interest in collectible Steuben crystal resulted in an even higher-profile acquisition, one that keeps on giving as part of Asian Artists in Crystal: Steuben Glass at Sunnylands, an exhibition opening on Jan. 28 at the Annenbergs’ 200-acre estate in Rancho Mirage. More than meets the eye, the display depicts an international tale of art and artisans, politics and peace, diplomacy and cross-cultural notions of beauty.

Empowered by a State Department initiative in the Eisenhower administration, Steuben Glass Works produced 36 pieces of American crystal engraved with drawings by artists from 16 Asian nations. Three Steuben designers engraved the designs, selected from an exhaustive search. The variety of artistic styles and subject matter may seem decorative. But after an exhibition of the crystal and drawings opened in 1956 at the National Gallery of Art in Washington, D.C., and the Metropolitan Museum of Art before touring Asia for two years, it was clear the initial intent to foster better relationships, even prevent Communism from spreading, had achieved some measure of success. The celebration of art across borders, religions, and cultural traditions attracted more than 490,000 people, including world leaders, ambassadors, and major influencers of the day. “The collection has a wonderfully textured political history that inspired to the Annenbergs to acquire the full set in 1971,” says Anne Rowe, director of collections and exhibitions at the Annenberg Retreat at Sunnylands. “The Annenbergs understood the importance of diplomacy through art. It was deep to the core of who they were as people and as civil servants. As diplomats and ambassadors, they worked with Nixon throughout his efforts to improve relations with China. They were wildly interested in these 36 pieces for a variety of reasons given their backgrounds and place in society and culture.”

In 1971, Steuben contacted the Annenbergs with an update on these rare fusions of Asian artistry and American craftsmanship. Thirteen pieces in the collection were available immediately; the remaining 23 designs could be special ordered. Walter didn’t hesitate. While the couple could choose any objects in the world for their home, their aesthetic decisions were never made casually. They took utmost care in selecting art and objects that would surround them and their esteemed guests. Years later, Leonore became one of four founders of the Foundation for Art and Preservation in Embassies, an organization that helps embassies curate American art in their overseas headquarters.

“This collection and its diplomatic roots were not of trivial interest,” Rowe says. “It rang all their bells.” In celebration of the 60th anniversary of the creation of this crystal, the only known complete collection in the world will leave the historic Sunnylands residence to be reinstalled at Sunnylands Center & Gardens exhibition space. There, the crystal will be joined by reproductions of a select few drawings that inspired them, provided by the New York Public Library, where the originals reside. The show marks the first time the crystal pieces and their corresponding drawings have appeared together since this international project of goodwill toured Asia from 1956 to 1958.

At the time, Rowe says, “This was a departure from what was normally seen in America. It made for a very exciting introduction to the wide variety of Asian aesthetics.” At least two artists, one from the United States and one from Asia, had a hand in every piece of the collection. Some were well known; others were not. While the tour boosted the career of some of the artists behind the drawings, others fell into obscurity.

Never to be duplicated, the set encompasses a variety of shapes, from plates and urns to footed vases and ornamental bowls. Four were made from cast or sheet glass rather than by blowing. An inscription on one of the most popular pieces reads, “Confucius said, ‘Advance the upright and set aside the crooked, then the people will submit.’” Walter Annenberg’s favorite shows a brave man confronting a New Year’s Day parade dragon unafraid, a scene that curls around the bowl’s perimeter.

The original drawing for New Year in Formosa.

Since 1973 the glassworks have resided at Sunnylands in custom illuminated niches lined with turquoise velvet. “The Annenbergs and their decorators configured the whole hallway to give them a pride-of-place permanent position in the home so everyone could admire them en route from the main living area to the dining room,” Rowe says.

While the Annenbergs arranged the crystal to be aesthetically pleasing, Sunnylands exhibitors decided to display them by country, allowing visitors to glean the national sensibility of each piece. A 17-minute documentary film in the theater and a catalog that features insightful scholarly essays, a historical timeline, images of the original drawings, and vintage black-and-white photographs of the crystal by famed photographer Erich Hartmann provide a deeper narrative for the reunion of the crystal and the artists’ drawings.

The relevance of the exhibition endures at this international retreat destination known for its world-class hospitality and a landscape inspiring placid reflection. As glass scholar William Warmus attests in his catalog essay, “President Xi Jinping of China saw this series when he met with President Barack Obama at Sunnylands in June 2013, yet another example of how the Annenberg tradition of cultural diplomacy remains as important today as it was when this collection was created 60 years ago.”

Steuben’s optically perfect, transparent lead crystal, dazzling as it was in the residence and world museums, is stunning when displayed in the Annenberg center. Its high refractive index lets it shine like a diamond of global proportions no matter the setting.

Visit www.sunnylands.org for more information on Asian Artists in Crystal: Steuben Glass at Sunnylands, which opens on Jan. 28, 2016, and continues through Jan. 22, 2017.