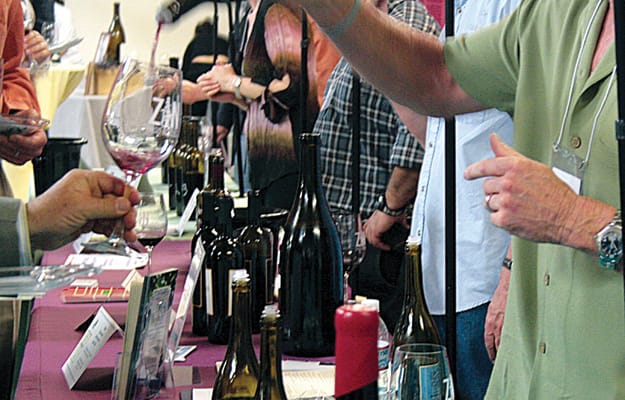 California winemakers stake their claim to growing a heritage grape

Something about zinfandel engenders passion among wine drinkers. Whether due to a distinct pepper on the palate, a jammy finish, or the romantic notion of gnarly hundred-year-old plantings that yield old vine zinfandel, the varietal demands attention.

California winemakers in Paso Robles so adore this grape that they throw an annual zinfandel festival each March. Crowds who might try a range of wines at any other wine festival devote their taste buds to a single varietal during the weekend event.

Both houses of the California Legislature passed a bill in 2006 to designate zinfandel as the official state grape. But Gov. Schwarzenegger vetoed the bill “because he didn’t want to play favorites [among the many varietals grown statewide],” says Rebecca Robinson, executive director of Zinfandel Advocates & Producers.

Only eight years ago did DNA analyses shed light on zinfandel’s mysterious past. It turns out that California’s zinfandel, Italy’s primitivo, and Croatia’s crljenak kastelanski share the same genetic structure. However, crljenak predates the appearance of the other two.

Nonetheless, people insist zinfandel and primitivo are different (there’s too little of crljenak in existence to generate an opinion, let alone a consensus, about that grape).

While Rough and Ready-based Zinfandel Advocates & Producers acknowledges the research linking zinfandel to primitivo and crljenak, “Zinfandel is definitely unique to California in terms of its history and its development, Robinson says. “It has followed its own path.” ZAP supports a research vineyard in Oakville with plantings of zinfandel and primitivo, she adds, “and they are very different.”

Joel Peterson, founder of Ravenswood Winery in Sonoma, ZAP board member, and co-chair of the Heritage Vineyard Committee, follows crljenak DNA from the Adriatic to Italy in the late 1700s, where the grapes became known as primitivo, as well as into the Austro-Hungarian Imperial nursery collection. According to Peterson, New Yorker George Gibbs traded part of his rock collection for vines in the Imperial collection and planted them in Long Island in 1824. From there, the grape made its way to Boston. Frederick Macondray is attributed with bringing zinfandel to California in the early 1850s. By 1888, there were 34,000 acres of zinfandel planted in California; in the 1990s, acreage climbed to 50,000.

“We have done a very long and arduous study in clonal selection,” Peterson says, noting that the Heritage Vineyard includes 90 selections, some pre-dating 1920, as well as primitivo.

“It turns out that primitivo is quite different in growth pattern. It tends to be a little less vigorous, more uneven and earlier ripening, and it tends to have smaller crops,” Peterson says. “Because of the expression of the grape, they taste slightly different also.”

Although some California wineries produce primitivo, he adds, “There’s not a lot of pressure to plant primitivo because people like zinfandel.”