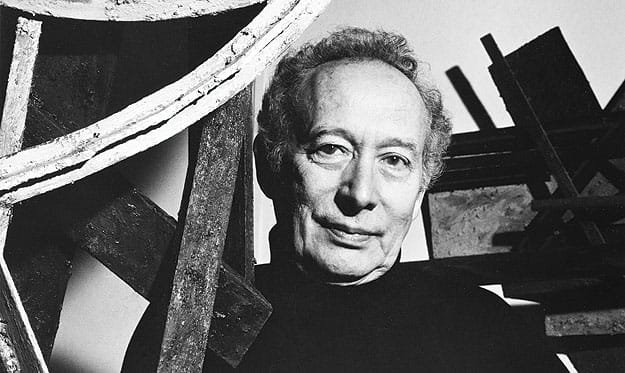 In a modest condo in a gated Rancho Mirage community, Marilyn Pearl Loesberg paces with a phone to her ear. She’s on the line with an art dealer in New York, where she’s organizing two exhibitions — opening the same week in October — for the late Abstract Expressionist Clinton Hill.

Meanwhile, Karla Jimenez, juggles administrative tasks at her desk situated between the front door and the kitchen, and two art handlers exit with one of Hill’s large, acrylic-encased paper collages that will be auctioned at ARTrageous (Feb. 27) to raise money for contemporary art exhibitions and acquisitions at Palm Springs Art Museum.

On a typical morning at Clinton Hill/Allen Tran Foundation headquarters, Loesberg catches her breath at the conference table in the sunken living room, where the artist’s paintings, collages, and constructions hang on the walls. Throughout the condo, art not only hangs, but also rests on the floor, behind doors, in closets, in drawers — hundreds of pieces destined for museums and galleries that will carry on Hill’s legacy.

That is the foundation’s mission. And the condo is its home.

“I knew it would be impossible to do anything for Clinton’s work without a space to show it,” Loesberg says. “Funds from the foundation bought the condo, which is an asset for us. It’s nice and comfortable for people to come see the work.”

Visitors include museum curators, gallerists, and collectors, who come to view the art and learn about the artist.

Hill was born in Payette, Idaho, in 1922 and raised on a ranch near the Oregon border. He began painting as a teenager, parlaying his rural sense of space, color, and geometry into fledgling compositions. He met his life partner, Allen Tran, while serving as a commanding officer in the Navy.

After graduating from the University of Oregon, Hill moved to New York, where Abstract Expressionism was tipping traditional art on its side. From there, he traveled to India on a Fullbright Fellowship and to study at academies in Paris and Florence.

In New York, according to the foundation’s consulting curator, Susan Larson, “Hill discovered a new range of materials when building and remodeling his and Allen’s loft on Spring Street in Manhattan’s SoHo district. He began to employ sheets of Fiberglas, vinyl, and wood, cutting into them, layering them, and even using discarded construction fragments as found materials. His studio environment had something of the madcap and chaotic about it, because he worked in series and loved to prompt chance encounters of visual elements.”

Larson, who has taught art history at USC and lectured at Palm Springs Art Museum, worked at Whitney Museum of American Art in the 1980s, the peak of Hill’s artmaking. She and Loesberg met at Marilyn Pearl Gallery in New York.

“I was doing a show in my gallery on American Abstract artists — mostly 1930s and ’40s work,” Loesberg says. “It was looked down on. In those days, people were looking at [Andrew] Wyeth. I contacted Susan, and our lives intersected over the years.”

Before Hill signed on with Loesberg, the artist showed with Virginia Zabriskie, who was turning her attention to dealing in photography. “I met Clinton with [Zabriskie] over a drink,” Loesberg recalls. “He became one of my star artists. I took his work to Basel and sold a lot of work in Europe. He was sought after by German and Swiss collectors. Frequently, I invited Clinton to come to Basel. He brought Allen. I became close with both of them.

“When I closed my gallery in 1993, we remained close friends,” Loesberg continues. “He was always the first call I made when I got to New York.” (She moved to the desert in 1998.)

“One day in 2003, I went to New York and made my first call to Clinton. He wasn’t well. Allen, his beloved partner of 50 years, was diagnosed with terminal bone cancer and was at St. Vincent’s Hospital. Clinton had emphysema, probably from the materials he worked with, and depended on Allen. Clinton was at Beth Israel Hospital. I met Clinton at the hospital thinking he was this indestructible person. I took him chicken soup and pastries.”

The artist had never updated his will; everything was to go to his partner. “All of a sudden it became urgent,” Loesberg says. “Clinton said, ‘Marilyn, what am I going to do about my work? Allen is dying.’”

When he decided to put his work into a foundation, Loesberg made an appointment for an attorney to visit Hill. “I went to Beth Israel the next day to tell him,” she recalls. “Before I got to his room, I was stopped by medical staff. The doctor had asked him if he wanted to be hooked up to a respirator. He said yes, but he died. Everything passed to Allen, who never got out of the hospital himself.”

Before he died, Tran appointed Loesberg as a trustee of the foundation. “I was the only one who could focus on this,” she says, noting that Hill’s artwork was in crates, in climate-controlled storage in Brooklyn, at a cost of more than $7,000 per month — for six years. “The storage would have dissipated the foundation’s money. I said to the other trustees that I’d move the art to the desert and get into the crates.”

Her efforts to view, catalog, organize, and exhibit the art have begun to revitalize the artist’s legacy. “The condo proved to be a wonderful solution,” she says. “Being around the work stirs the creative juices. We need this connection to the work. And I love it when a dealer comes from New York or collectors come from L.A. It feels good.”

In October, Meredith Ward Fine Art in New York exhibited Hill’s works on paper from the 1960s, as well as late gouaches and canvases. At the same time, Pavel Zoubok Gallery, also in New York, showed the artist’s constructions and collages.

Museum curators tap the foundation for art and grants. “The Getty came out and selected handmade paper books and a portfolio of works on paper,” Loesberg says. “And they also took correspondence between Clinton and [artist] Jay DeFeo. I was impressed. It gave me a good feeling about what museums can do.”

Later, Victoria and Albert Museum in London took a book and the woodcut that won the 1957 print prize at the Brooklyn Museum. And when the new Crystal Bridges Museum of American Art in Arkansas bought a collage, Loesberg donated 15 woodcut prints to the institution.

“That is what the foundation does: We place the work and give grants to important institutions,” she says.

Foundation grants go to institutions researching and planning exhibitions for American artists born from 1920 to 1960. It has given money to the Whitney for a DeFeo exhibition, LACMA for a John Altoon project, and San Jose Museum of Art for an Eric Fischl show. “Museums need foundation money,” Loesberg says. “They can’t afford things because they’re not getting the private funds.

“Clinton would have loved this.”