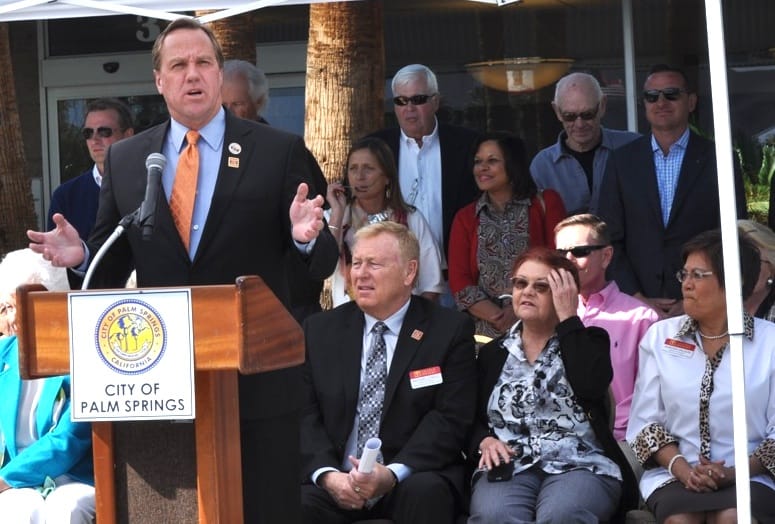 In 2003, Palm Springs city officials initially looked at the Palm Springs Mall as a potential site for the College of the Desert's (COD) expansion plans.

Within a few years as the economy hit a wall and tenants began to vacate, including anchor store Gottschalks, the mall eventually slipped into foreclosure.

By 2013, the only tenants left were Kaplan College and GNC. The mall had been bought for $9.4 million in 2012 by YTC Investments based in Pasadena, whose owners live in China.

The mall has once again become a focal point for COD's expansion plans as the city and college announced jointly in an April 1 press conference in front of Palm Springs City Hall.

Pougnet says discussions began about a year ago after the mall's owners failed to respond to inqueries about its future. "We reached out to their team," explains Palm Springs Mayor Steve Pougnet. "'You bought it, what are you going to do with it?' There has never been a firm redevelopment plan for the site nor any interest from the owner to put money into the site, which clearly makes it difficult to see what is going to happen there."

The mall became an active point of discussion for COD after plans for its original north Palm Springs campus expansion fell apart when Southern California Edison canceled plans to develop a solar park on half of the 119-acre campus off of Tramview Road.

"When it became clear we wouldn't be able to develop the green park, which we counted on to generate a significant amount of our operational funds on our north campus, we recognized we needed to look at some other option," says COD Superintendent/President Joel L. Kinnamon (pictured above). "We decided on the Palm Springs Mall location. We simply couldn't afford to occupy nor needed 120 acres without our partner."

COD made an offer to buy the mall from YTC Investments two weeks ago, but Kinnamon says he has not heard from them. The city could exercise seizure of the property through eminent domain, but that the process could create a lengthy court process before any campus construction could take place.

Pougnet says the north Palm Springs property on Tramview Road would be perfect for residential development.

"I think that is perfect to do some residential," Pougnet says. "Its flat, and you can make some certain improvements in the Desert Highland neighborhood up there. We'll have those discussions on that property to make sure it is used well."

VIDEO: Hear from Palm Springs Mayor Steve Pougnet and College of the Desert President Joel L. Kinnamon on why the Palm Springs Mall is a good location for a community college campus.