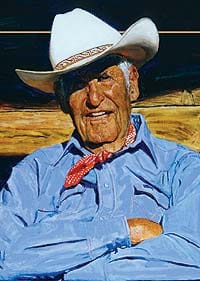 Once upon a time, when I served on Palm Springs City Council, women’s rights were a hot national topic. That was the late 1980s. Joan Behrmann, then-editor of The Desert Sun and always keen on appearing topical, asked how I could tolerate serving with the likes of rough-tough, plain-spoken, politically incorrect Mayor Frank Bogert, known for his outlandish taunting of women. He referred to the more senior ones unflatteringly as “old sisters” and, from the outset, he called me “Applepuss.”

This was appalling to Joan. It never bothered me. I took it in good fun, not as a personal insult, but a lighthearted way of cutting council chamber tension. Frank has a knack for cutting to the chase, in person or on paper.

I began collaborating with Frank on his book View from the Saddle: Characters Who Crossed My Trail, thinking it would require reams of editing and rewriting. But in editing his first pieces, I realized how authentic the prose read. It was real. It was Frank. It was a humbling realization. The cowboy could write.

Frank, 95, is not computer-savvy, so he wrote longhand on legal-size, yellow paper and left the work in a blue folder on a metal chest on his front porch. I retrieved, edited, and returned the manuscripts to the chest. Our system was akin to the “dead drops” spies used during the Cold War. But it didn’t invoke danger, except when folks like disgruntled old Gerry Maloof stormed around town angry about not being included. Frank wouldn’t do it, even though Maloof’s was one of Palm Springs’ first retail stores. Frank thought Gerry was a bitter old man.

Nor would he accede to fans of Sonny Bono. Among others, Frank’s longtime friend Ray Corliss urged Frank to include Sonny in his book. But Frank couldn’t think of anything “the little guy” had done as mayor to improve the town. In Frank’s first book, Palm Springs: The First Hundred Years, there is a staged photo of Frank in a white hat, riding horseback beside Sonny in a black hat. That shot reveals it all.

Frank has a soft spot for artists, a category in the book containing numerous profiles. He regularly lunched with Charles Schridde, who painted Frank’s portrait for the book cover. He also has a soft spot for people who have made a contribution to the city he loves, and they make up the heart of this entertaining group of characters.