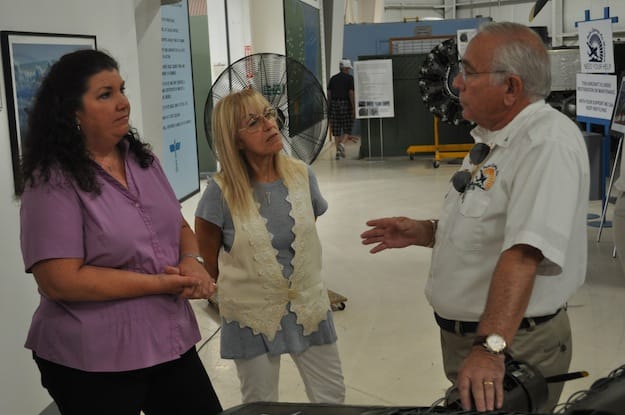 Hollywood in the desert.

But it’s making a comeback, albeit in a different way.

CV Studios Entertainment, a 2012 entry in the burgeoning Coachella Valley media market, is both building on that previous connection and forging a new one.

“Our goal is to build a Hollywood comparable production facility here in the Valley, put lots of people to work, create our own product and provide the space for other content creators to work,” says CEO Carole Kretchman.

Kretchman and co-founder Leanna Bonamici have brought extensive entertainment backgrounds, experience and talent to that end.

They met through the Coachella Valley Film, Television and Music Academy and by then they were each “doing what we could to train youth in the entertainment industry trades and create a crew based industry here locally,” says Bonamici.

Bonamici owned and operated Casablanca Studios in Desert Hot Springs for over a decade, produced several television shows, a feature film, corporate videos and as she tells it, “tons of other productions.” She also established the Palm Springs Women in Film and Television. Kretchman owned and produced the Ice Capades, teaching thousands of kids how to skate, served on the Board of the renowned OTIS Parsons School of Design, worked 17 years with the United Nations and founded Peacemaker Corp., a non profit group teaching young people the art of communication.

Once established at CV Studios, “we jumped into the new media stream that’s driving the growth of content. With so many new screens to play on, we create, produce, re-purpose via all available channels of distribution: television, mobile, print and the web,” Kretchman said.

They are presently expanding their core business to include an online broadcast network, and are developing multiple channels by producing or licensing content that will flow through other media such as YouTube, Fullscreen, Tubefilter and Howdini.

“We can solidify our primary goal," said Kretchman, “by building a robust and exciting content production business here in the desert, bring new clients, capital and employees into the valley and grow Palm Springs into a hub of movie, TV and internet production. The new digital stream is the largest growing segment of the industry.”

The projected economic benefit to the Coachella Valley is huge. A new and expanding industry can bring jobs and big money in a short period of time.

“A film company shooting here in the Valley can spend up to a million dollars through catering, lodging, supplies and by hiring local people. It’s one of the four growth sectors of the local economy,” says Bonamici.

CV Studios has recently produced three television shows, including two currently airing on PBS. "Shorts Showcase" brings short films of festival quality to viewer screens plus informative interviews and industry information. "The Real Desert with Steve Brown" is a celebration of the history and beauty of the American Southwest. Both can be seen locally on KVCR, Channel 9.

"Cooking it up with Karly", healthy eating for kids, starring 11-year-old Karly Smith, is filmed entirely here in the Coachella Valley and is expected to employ up to 50 people. It can be seen on Everloop, a media site for the young.

Currently in production is a serial documentary on the history of the Palm Springs Air Museum (pictured above). Featured are volunteers and knowledgeable others  discussing the museum’s planes and the pilots who flew them, served and sacrificed so much for our country. It will soon be seen on PBS and released on DVD.