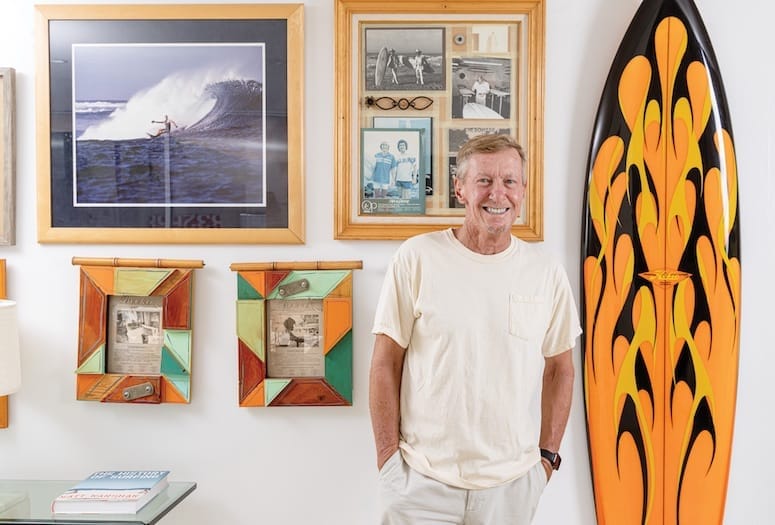 Dave Hollander: “I could live anywhere I want. But Eisenhower doctors and staff keep me alive, and I am pretty stoked.”
PHOTOGRAPH BY MARK DAVIDSON

Between 90 minutes of playing pickleball and a session of water aerobics, Dave Hollander speaks about serious matters with good humor. His rapid-fire delivery sizzles with sunny zeal. On a daily basis, the resident of Seven Lakes Country Club in Palm Springs pursues two of four activities: riding his bike 15 miles, water aerobics, pickleball, and golf.

Never mind his age (68); lots of Coachella Valley “seniors” lead robust lives. What sets Hollander apart is that he has stayed active while battling stage IV lung cancer for three years and with a third of his lungs removed. And this comes on the heels of conquering stage IV melanoma — a rare achievement on its own.

“The fun part about it is that when they rolled me into the operating room [for lung surgery] and I saw the da Vinci robotic machine, I said, ‘I invested in this machine and have never seen it,’” Hollander recollects. “In 2000, I invested everything into Intuitive Surgical [maker of the da Vinci robotic surgery system], and that’s why I retired.” (Intuitive Surgical’s 2000 IPO share price was $9; it closed 2020 at $818.10 per share and a net worth of $96 billion. For more on Eisenhower’s acquisition of da Vinci machines, see Palm Springs Life’s April issue.) 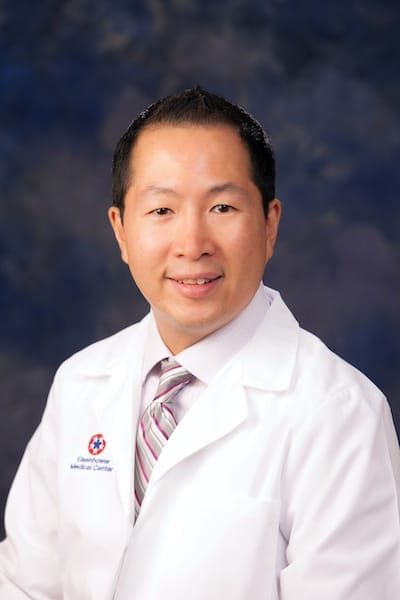 Henry Tsai, M.D., is principal investigator in a national clinical trial for an immunology drug.

Hollander’s deadly health issues derive from a life of surfing (melanoma from sun exposure) and handcrafting surfboards (lung cancer from chemical exposure). “Surfing is more dangerous than you think,” he claims with what one soon understands to be his signature appreciation for irony. About eight years ago, Hollander sought medical attention for a lump on his throat. A scan and needle biopsy revealed a tumor wrapped around his parotid gland. He underwent two surgeries, the first to remove the tumor and the second to remove 23 lymph nodes.

“My prognosis wasn’t good, and treatment options were limited,” he concedes.

Henry Tsai, M.D., a Hematologist/oncologist at Eisenhower Lucy Curci Cancer Center and a principal investigator of a National Cancer Institute clinical trial for an immunotherapy drug called Yervoy, got Hollander into the trial. Yervoy eradicated the tumor. According to Tsai, Yervoy “absolutely saved his life.”

A follow-up scan in 2018 revealed lung cancer that had metastasized to his spine and esophagus.”

“I had to have a needle biopsy within 1/16th inch of my spine. Talk about precision,” Hollander says, adding that he also underwent a procedure to get an esophageal sample.

“There are [tumor] markers, and each situation calls for its own treatment plan,” Hollander says. “I got on a program with Tagrisso. At my last PET scan, the two major tumors were 70 percent smaller and there were no new ones.

“I had side effects [from the drug] for the first couple of months,” he concedes, “but things settled down and I am leading a perfectly happy lifestyle since. As Dr. Tsai has explained to me, it doesn’t mean the tumors won’t come back, but this pill can keep me alive. People have been living [taking the drug] for five or six years. If I can have that kind of result, there are cures coming down the pike. That’s what I am hoping for.”

Though Palm Springs lies a hundred miles from the ocean where Hollander loved surfing the waves, he declares he will travel but not relocate.

“I could live anywhere I want. But Eisenhower doctors and staff keep me alive, and I am pretty stoked.”