DeeAnn cCoy and Jackie Thomas flipped Casa Estrella in 2017 but decided to move in rather than sell.
PHOTOGRAPHY BY ANTHONY-MASTERSON

Venture no further than the front door of DeeAnn McCoy and Jackie Thomas’ Indian Canyons home to glean a sense of the longtime couple’s delightful duality. While the interior of the portal is painted in a serious slate gray, its street face features a door lacquered in fuchsia, a lickable shade that entices hummingbirds and Palm Springs Door Tour–goers alike.

“Dee said, ‘There’s no way we’re painting that door pink,’” Thomas recalls of a tense moment during the 2017 renovation of their 5,600-square-foot home, Casa Estrella, a 1975 custom design by celebrated architect Hal Lacy and Hollywood set designer James McNaughton. “I guess some of us like pink — it’s called Pink Dahlia, actually — more than others.”

And, so the dichotomies go at Casa Estrella (so named for the street it sits on). Yet, even in the face of paint-color conflicts and clashes over cost, McCoy (a former advertising executive from Oregon who favors elegant restraint, a self-styled Bruce Wayne of DC Comics fame) and Thomas (a veteran of Nike global marketing and sworn “budget buster” with the fiendish laugh to prove it) manage a healthy equilibrium. 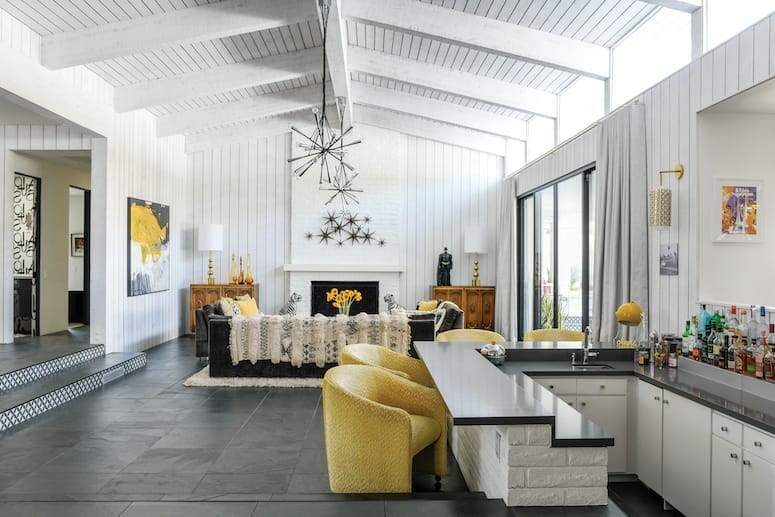 The verticality of the living room’s shiplap walls draws the eye upward, apropos of Casa Estrella’s celestial décor: A pair of starburst Eurofase chandeliers twinkle overhead, while a vintage Curtis Jere wall sculpture makes for a star-studded mantel. (And the sunken wet bar is the star of any party.)

“As someone once said, ‘Behind every door, at every turn, there’s a surprise.’”

“It’s easier to talk about the characteristics of the house than it is to talk about us,” McCoy says. “But as someone once said about our place, ‘Behind every door, at every turn, there’s a surprise.’ I think we’re a surprise.” That quotable someone was Lisa Vossler Smith, executive director of Palm Springs Modernism Week, which featured Casa Estrella as a showcase house in 2018.

As partners in Thomboy Properties Inc. a firm specializing in desert-modern home restorations, the women had planned to flip Casa Estrella, treating it like any of the other 26 projects they’ve completed in Greater Palm Springs over the last decade. 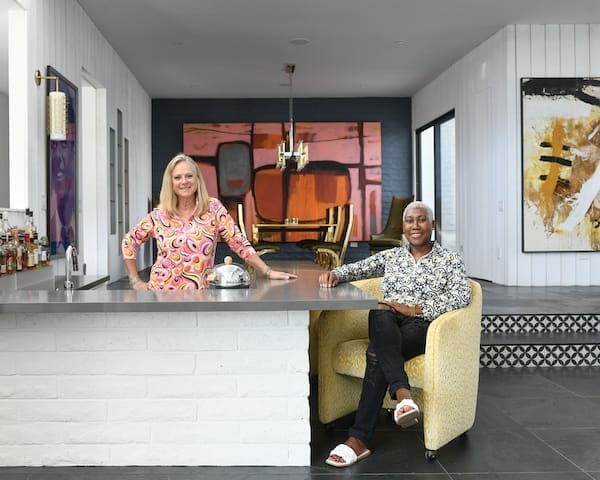 DeeAnn McCoy (left) and Jackie Thomas are partners in life and in business. Thomboy Properties Inc. specializes in restoring desert-modern homes in Greater Palm Springs.
But this particular place had something special — its generous scale perhaps, or the inspiring way the long-battened-up spaces so readily adapted to warm sunlight and daring color — that captivated the real-estate mavens. Before finding this home, they lived quite happily for seven years in a more classic midcentury modern abode: a white box with glossy white floor tiles that reflected images of the palm trees outside. “People in Palm Springs love to see palm trees in their houses,” McCoy says.

While the stucco exterior of Casa Estrella is indeed painted white (the most practical choice for sunbaked locales), another surprise is the Montauk Black slate floor that the couple selected, which provides a sense of anchoring that befits — gulp — a forever home. “This house made us want to dig in, get comfortable, and stay put,” McCoy says.

Given the homeowners’ art sensibility, the dark base also grounds the colossal abstract canvases, where breathtaking swooshes meet eye-popping punch. “People have asked us, ‘Why is your art so big?’ The simple answer is, ‘Because we have the space,’” McCoy says. “At this scale, the art is so much more dynamic and impactful.” 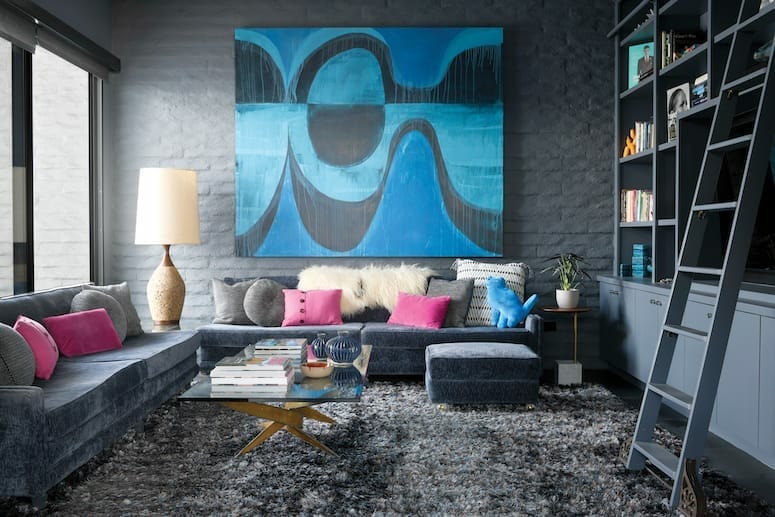 Lava-lamp-like movement in a bluesy canvas by local painter Shawn Savage contrasts the den’s boxy 1970s casework. Each morning, the homeowners retreat to the Kravet Smart fabric-covered vintage sectional to read; their nightly ritual includes binge-watching television and scotch, neat.
Hanging on a gray slump stone wall in the formal dining room, an exuberantly — you guessed it — pink diptych by local artist Shawn Savage makes a lively conversation piece for dinner guests seated at the vintage smoke-glass table by Milo Baughman for Design Institute of America (DIA). Its sublime materiality is echoed in McCoy’s nearby display of glass sculptures, from Blenko handblown vases to a big amber fish, joined by ceramic Bitossi owls. The room — in the couple’s estimation, too glamorous for daily use with its gleaming brass Gaetano Solari chandelier and bronzed textile chairs — has nevertheless hosted intimate wine tastings for just the two of them. One Valentine’s Day saw the uncorking of a 1985 Chateau Margaux, a silky, supple, stunningly fruity Bordeaux blend that had been the rarest vintage in their 650-bottle wine cellar.

“This house made us want to dig in, get comfortable, and stay put.” 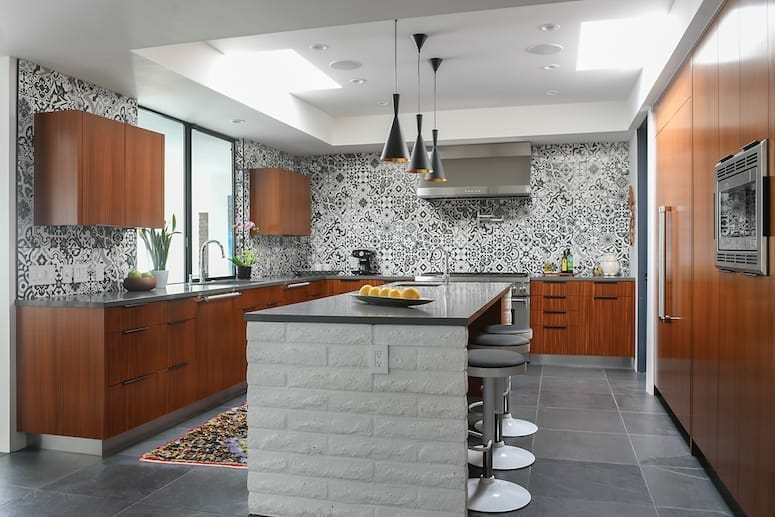 The homeowners pulled Casa Estrella’s Montauk Black slate floors and gray slump stone walls into the kitchen for continuity between spaces. A backsplash mixes different Porcelanosa tiles that are unified in color and Moorish motifs. 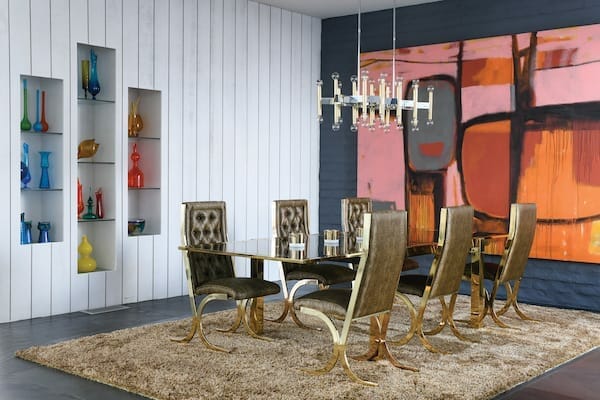 The formal dining room is a gallery of artful finds. Behind the vintage Milo Baughman smoke-glass dining table is a colossal composition by Shawn Savage.
The den is Casa Estrella’s most lived-in space, distinguished by a drip-heavy blue piece also by Savage. (The painter frequently collaborates on Thomboy projects, creating custom canvases that suit each renovation.) This one lends movement to a cozy space ironically meant for stillness, another paradox of the design. In the mornings, the self-proclaimed news addicts quietly flip through digital editions of The Desert Sun or The Washington Post on their individual iPads under Savage’s art, McCoy curled up on one sofa and Thomas lounging on the other. At night, they rapturously watch HBO’s Succession. 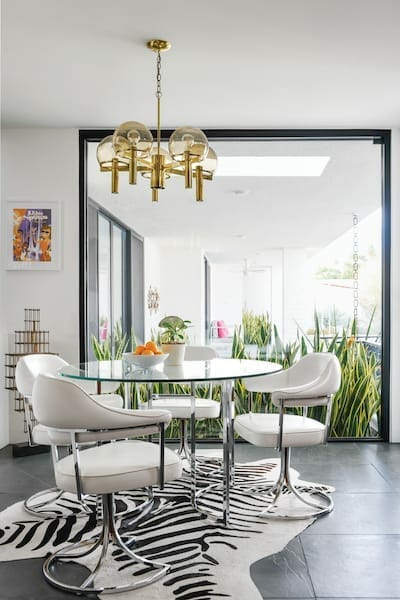 DeeAnn McCoy and Jackie Thomas eat most of their meals at the breakfast nook’s vintage Milo Baughman dining set overlooking the courtyard.

“It’s like a car accident that you don’t want to look at, but you can’t help it,” Thomas says with a wide grin. “It’s that good.” During these hours, the television’s blue screen — accommodated, by way of some light carpentry, into the original 1970s casework — casts the hypnotic spell on the room, while Savage’s art recedes into the dark.

But that is the exception, not the rule. By and large, the art throughout Casa Estrella inspires passage from space to space, if only to see, as Vossler Smith suggested, what each has in store.

The bold black-and-white brushstrokes of a large-scale painting in the foyer by Balinese artist Suliyat Buamar seem to direct you, like an enthusiastic compass, to other parts of the house. Like the hallway, where a lone female nude by Michele Russo, a 40th birthday present from Thomas to McCoy, underscores the paradoxical nature of Casa Estrella. After all, one critic described the late Portland painter’s work as both “classical and abstract … reserved and confrontational.” 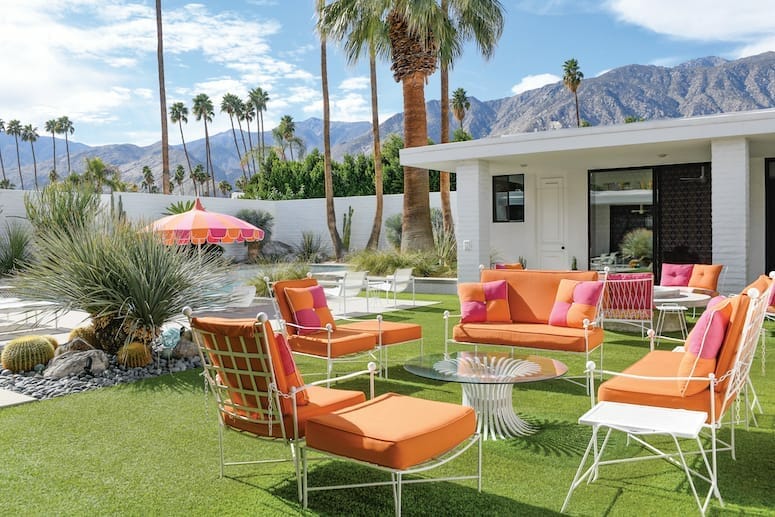 Most of the outdoor furniture — think vintage Salterini chairs and Schultz 66 chaises — were salvaged from various Thomboy projects and reupholstered in Soleil all-weather fabric by Trina Turk to create a courtyard with fruity punch.
The primary bedroom showcases yet another work by Savage, hanging in a former double closet turned sitting area. Its downy forms of cherry blossom pink superimposed with bold black lines mirror the room’s yin (vintage poufs upholstered in cotton-candy shag and a vintage brass canopy bed) and yang (a hide-covered Le Corbusier lounge and muscular marble hearth). Across the courtyard and inside the juicy-hued guesthouse, a thirst-quenching, mango-colored pièce de résistance (hung on a hot pink wall) reveals a subtle geometric relief pattern the closer you get to it. 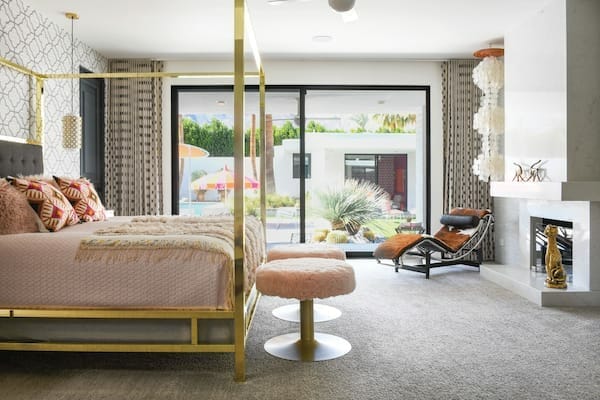 From the gleaming brass bed and shaggy pink stools to the hide-covered Le Corbusier chaise and 1970s capiz shell chandelier, myriad textures in the primary bedroom create an inviting sanctuary.

“This particular place had something special that captivated the real-estate mavens.” 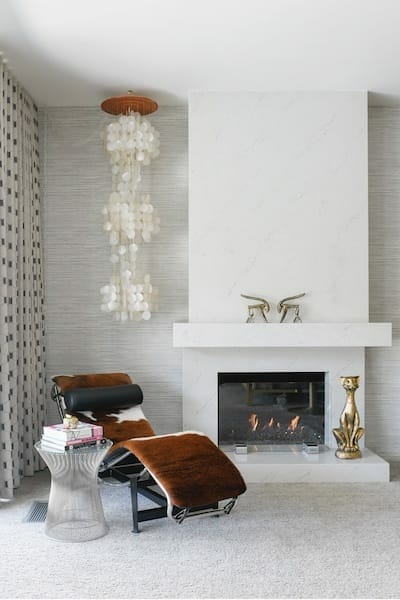 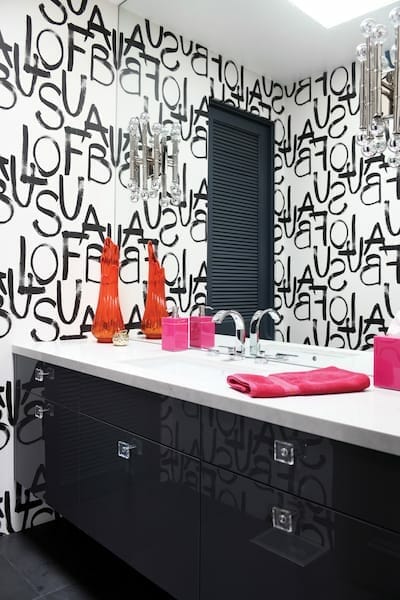 Bathroom “graffiti” by Wallpaper From the ’70s.

The formal living room flaunts a second painting by Buamar. Its ochre tones are reflected in a trio of long-necked glassware and a pair of vintage Stiffel brass table lamps. (Dare we also mention the golden superhero belt on the oversize model of Bruce Wayne’s alter ego, Batman?) Two minimalist chandeliers twinkle above.

But the literal star of the space is the Curtis Jere wall sculpture. Were it not for McCoy and Thomas obligingly parting with another beloved Jere piece in order to ink a deal on one of their flips, this particularly cosmic work may never have taken its rightful place above the mantle. Now it catches the eye as an artistic interpretation of Casa Estrella’s patron celestial bodies.

“I promised Dee we’d find another Jere that we’d love, and we ended up finding the right one,” says Thomas of the fateful finishing touch. “Filling the house with beautiful pieces, art and objects that emote, makes living here such a personal and sensuous experience.” One with two distinctly influential sides.

• READ NEXT: Marrakesh Country Club Designer Making Her Mark in the Desert.