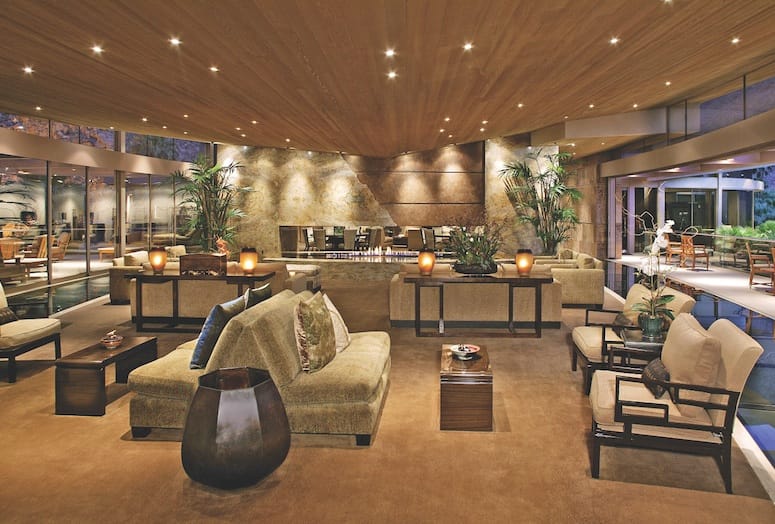 Guy Dreier homes at The Vintage Club are as striking as they are subtle, relying on natural materials and minimalist design.
PHOTOGRAPHS BY JIM BARTSCH

But the Palm Desert–based designer’s projects — which range from beach houses in Hawaii to ski chalets in the Rocky Mountains — are never gaudy or garish, relying on natural materials and minimalist design to create residences that are as subtle as they are striking.

Dreier’s early career was in full bloom in 1980 when The Vintage Club made its debut at the foot of Eisenhower Mountain. Kitchen design by Guy Dreier at The Vintage Club.

“From the start, The Vintage had the top architects in the country,” Dreier recalls. “Anyone that was anyone was in there working. It was really competitive, and we had a lot of unique lots that made for rather challenging solutions. But it was an exciting environment to be a part of.”

Unsurprisingly, Dreier’s nature-inspired approach to residential design was an ideal fit for the community.

“I was looking to create organic sculptural art that people could actually live in,” he explains of his first homes in The Vintage Club. “It has always been about bringing the outside in. But it also varies from home to home, because every site and every client has a different personality that needs to come through in the design.”

Dreier’s resulting Vintage Club homes are a perfect reflection of their surroundings. Building materials such as Indian slate, granite, and limestone can be found both indoors and out, blurring the barrier between the two environments. Concrete floors, exposed steel frames, and floor-to-ceiling windows create a similar connection with the outdoors. Still, each home bears its own stamp of individuality—something not commonly found in other residential communities. “I’ve been lucky to be able to make something unique each time, as opposed to just another house in a high-end development,” Dreier says. “That’s hard to do in a lot of these clubs, because they want a certain level of sameness.”

In the 35 years since The Vintage Club first opened, Dreier has developed a dozen homes within the community, several of which were commissioned by repeat clients looking to upgrade their square footage. Along the way, each project has served as a milestone for the architect as well. For instance, Falling Rock, which Dreier completed in 1998, introduced a new combination of indigenous and contemporary design that continues to have a strong presence in the architect’s work today.

“Falling Rock had much more of a desert feeling than what I had been doing at the time,” Dreier explains. “It was really a new direction for me.” An 8,000-square-foot garage topped by a double-plated glass ceiling.

In another Vintage house, Dreier demonstrated his flair for the extraordinary by creating an 8,000-square-foot garage topped by a double-plated glass ceiling that allowed the homeowner to admire his 25-car collection while sitting in his study above.

“The whole concept was that [the owner] could go into his study, turn on the lights, and admire this great car collection while he worked at his desk.”

Dreier’s most recent residence at The Vintage Club promises to be yet another extraordinary feat. Located on a long and narrow site, the home poses the kind of challenges and rewards on which the architect thrives.

“The homeowner wanted to get as much light as possible, so we created this dual-sided home, with one façade facing the south toward the mountains and the other façade facing the north and the golf course,” he explains. “It is like two houses in one.”

Ultimately, however, Dreier attests to a singular element that consistently impacts each of his Vintage Club projects.

“The people are really the powerhouse that makes each home unique,” he says. “Trying to understand each client and find what makes them tick ultimately is what drives each project to be a success.”