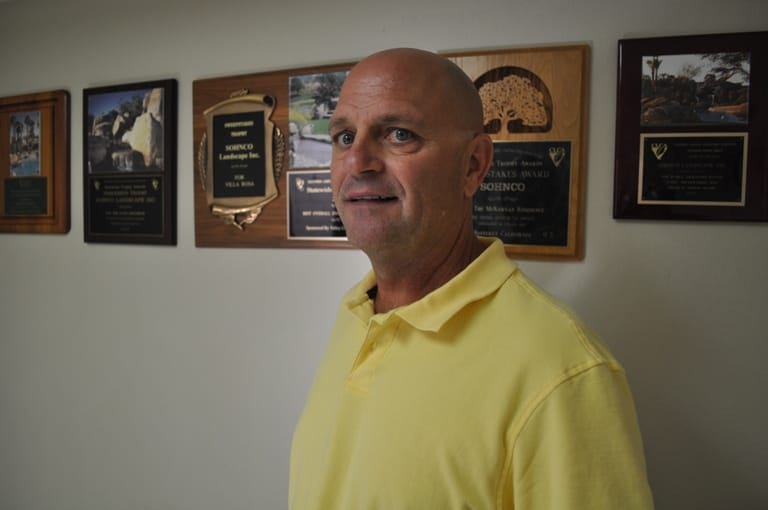 Wayne Connor recalled driving across the country for what he thought was a job offer from an architectural firm in San Francisco.

When he arrived from his native upstate New York, more than 2,500 miles later, Connor found no job.

Six months later, Connor did land a position, and eventually made his way to the desert. Not too long after, Connor was back in a car driving to Palm Desert after meeting with a client when he noticed the landscape work on a house in the Tamarisk Country Club with a sign indicating the job had been done by Scott Sohn’s landscape company, Sohnco.

“I got out of the car and walked around the job,” Connor said. “It was the little things that caught my eye seeing Scott’s work for the first time. He knew quality. He had a real good design sense and had been able to communicate that to his crew, which is a rare find.”

This time, Connor’s trip steered him into a working relationship that continues to pay dividends. For the past 25 years, Connor and Sohn have combined their talents on a variety of custom home landscape designs.

In November, Sohn was recognized for excellence in landscaping with the Stuart J. Sperber Memorial Sweepstakes Award during the 2012 California Landscape Contractors Association (CLCA) convention.

“It’s a nice ‘atta boy’, slap on the back,” Sohn said. “I share all of this with my crews. It shows them I appreciate their hard work and their attention to detail. This is what happens when we pay attention to those details. It’s just a confirmation of our ability to do quality work.”

It's All in the Details

The Palm Springs High School graduate made Connor’s designs come to life in the award-winning project at Skyridge Estate in Rancho Mirage. Connor is also responsible for the design work of Sohn’s two other CLCA “Best of Show” awards.

“We have a running joke that Wayne’s dreams are my nightmares,” Sohn said, laughing. “He’ll come up with an idea and I’ll look at it and think, ‘OK, figure it out’. I can almost sense what he is thinking, and he can anticipate what I’m going to do. Wayne is probably the premiere custom home designer in the Valley. I enjoy working with him.”

Connor helped introduce Sohn to the custom home market, and there are examples of their work at The Vintage in Indian Wells, Big Horn Golf Club in Palm Desert and The Reserve Club in Indian Wells. The tandem’s work at Skyridge Estate in Rancho Mirage illustrated the painstaking detailed effort that goes into creating a stunning, finished product.

But Connor had some surprises in store.

“It wasn’t a typical, ‘Here’s a design, put it in, planned letter to letter’,” Sohn said. “Wayne did a plan up, but we weren’t sure what materials we would use.”

For example, Connor had drawn a layout of the Zen Garden but they weren’t sure what kind of stone to use. Through his network of rock quarry connections, Sohn wound up locating the stone he wanted in the hills in the gold rush area near Sonora, just east of Sacramento. Sohn said the stone actually shoots up out of the ground in big slivers and slabs.

“He is definitely the Valley’s rock man,” Connor said. “He understands the material and what it should look like when it’s done.”

“The stone really lent to a Zen feel,” Connor added. “When you step into it, it feels like a private room, kind of ‘Harry Potterish’ to me.’

One day while working on the same project, Connor came to Sohn with a pencil drawing on a regular sheet of plain paper for a bamboo wave.

“Wayne said, ‘What do you think of this?’” Sohn recalled. “I was like, OK (laughing). I wasn’t sure how we would do it so it would last. That was pretty challenging. It starts out as kind of this concept and we figure out how best to do it.”

Sohn has always had an inclination to tinker, perhaps an extension of his father’s auto mechanic background After high school, he attended College of the Desert where he enrolled in a plant design class.

“I’m not sure what it was about the plant design course that caught my eye,” Sohn said. “I’ve always been an outdoors type person. Growing up, I was hiking, being outdoors. That connection really got me dealing with plants and natural materials.”

The class caused Sohn to switch his major from architecture to landscape design. However, rather than pursue the academic side of the subject, he decided to tackle it hands-on by starting his own landscape business, earning his contractor’s license in 1984.

“It turned out to be a good choice,” Sohn said. “I love being outdoors, and I know if I had taken the other route, I would have been stuck in the office all day. I’m only in the office now when I have to be.”