Two Bunch Palms is a contemporary wellness hotel where you can escape and enjoy the tranquility of the desert surroundings and the mineral waters for its therapeutic and mood-enhancing properties.

Desert Hot Springs has long been world-famous for its boutique hotels boasting natural hot springs. And while the area is more popular than ever for those wishing to soak in the local healing mineral liquids, the rapidly growing desert community now has so much more to offer its residents and visitors alike. Innovative and bold ever since the homesteader days, Desert Hot Springs continues to blaze new paths through the desert — now, in the form of “cannatourism.”

Desert Hot Springs had already earned the eyes of the nation back in 2014, when it made the surprising choice to become the first city in Southern California to approve the large-scale cultivation of cannabis for medical purposes. It was a creative decision that not only saved the city’s finances, but also paved the way for new and exciting developments in their corner of the desert.

Despite the stigma and doubt that once surrounded the burgeoning cannabis industry, “Our city council was responsive to hearing the industry out,” says Desert Hot Springs Deputy City Manager Doria Wilms, adding that members did a copious amount of research prior to bringing the issue to a municipal vote in 2015. “Our ordinances were overwhelmingly approved — by more than 70% of our population.”

Thanks to the long-term vision and entrepreneurial spirit embedded in its new laws, Desert Hot Springs was perfectly poised for explosive growth when recreational marijuana became a statewide reality in 2018. “Where other desert cities had to go back and modify their ordinances, we already had a framework in place to seamlessly transition our operational businesses into the new model,” says Wilms. “And we’re still the leaders in California as we now move into cannatourism.” 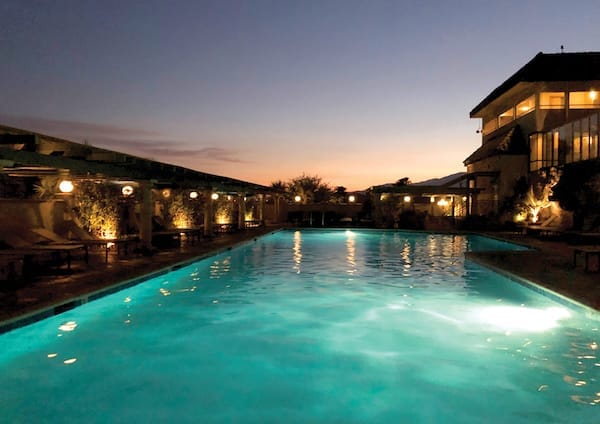 Indeed, while others are just starting to welcome dispensaries and the like, Desert Hot Springs has already expanded to working with business owners to develop creative new projects in the cannatourism space. In some ways, this initiative is the perfect marriage of Desert Hot Springs old and new. Once more, the city’s boutique hotels are rolling out their welcome mats to visitors — along with new ones popping-up shop. Only this time, there are new and innovative wellness offerings on the menu.

We’re still the leaders in Califorina as we now move into Cannatourism.

“From the very beginning, our city council anticipated we would want to effortlessly integrate the cannabis industry into the health and wellness foundation already built here over decades thanks to our small boutique hotels,” says Wilms. “The biggest difference in melding cannabis and hospitality/tourism is that guests will soon be able to legally purchase and consume cannabis at those hotels. Maybe it’s edibles, maybe it’s vaping, maybe it’s your traditional joint. But they’ll be able to do all of that in a legitimate setting.”

Each accommodation will, of course, be limited to those 21 and over, and alcohol sale and use will be prohibited on premises offering cannabis. The first such property could be welcoming overnighters as early as spring 2022. From there, the desert sky’s the limit. “We don’t have a cap on the number of cannabis hotels that can operate in the city,” stresses Wilms.

While the deputy city manager points out that the income directly derived from these newly licensed resorts’ pot offerings is limited to taxation on their retail figures, it’s clear that transient occupancy tax levels are sure to rise as well, since countless cannabis habitués will choose to book a stay in Desert Hot Springs as opposed to sojourning at less accommodating accommodations.

In addition, Desert Hot Springs is venturing into the arena of performance spaces devoted to onsite retail cannabis sales and use — a first for our nation. “We do not permit standalone lounges,” clarifies Wilms. “There’s an entertainment component at the root of the idea.” 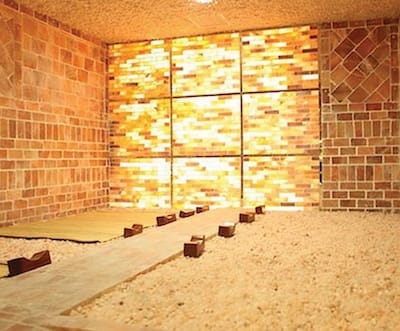 Enjoy the healing rejuvenation of the only authentic Himalayan Salt room in the Coachella Valley.

The first to take advantage of this new opportunity is Agriceutical Global, a vertically integrated cannabis company, currently based in West Hollywood, that will shortly relocate its headquarters to Desert Hot Springs. There are plans to break ground on a 55,000-square-foot cultivation and manufacturing operation as well as a yet-to-be-named,19,000-square-foot concert complex. Many involved with the project are comparing it to the House of Blues franchise.

“This one centerpiece of our project in Desert Hot Springs is going to be the first large, cannabis-friendly entertainment venue in the nation,” promises Agriceutical Global Chief Financial Officer and Managing Member John Berry, who eyes a holiday 2022 opening. “We’ll present everything from top-name entertainers anyone around the world would recognize to local bands and comedians. Premium reserved seating and an attendance capacity of 1,000. All with first-class service.”

On the menu for cannabis fans? “Since we have experts with over 30 years of cultivation experience, we’ll feature our own premium, craft product — which we believe will become defined as the finest in the industry — but we will also sell other brands,” Berry says. “We’ll have cannabis-paired foods, and ultimately, we’ll also offer cannabis-infused foods.”

According to Berry, no city could ensure better success for Agriceutical Global’s brainchild than Desert Hot Springs. “As far as I’ve seen, it’s the only city in the state of California that’s really developed a long-term cannabis strategy,” he says. “They’ve actually spent time and energy developing a plan, and their focus is now on expanding cannatourism within the city, whereas most everybody else seems to be just doing it on the fly.”

Once Berry and his colleagues set Desert Hot Springs as their future home, dealing with the city itself was an experience he describes as a dream. “They were just very, very easy to deal with. Very positive and cooperative in terms of everything we brought to the table as far as what we needed to accomplish to make our project work and make it successful. It was truly a strong public-private partnership.”

It’s projects like this that prove why Desert Hot Springs is the Coachella Valley city best positioned to enter the realm of cannatourism — a new term that we all should start getting used to.

“We just started calling it cannatourism because it’s cannabis and tourism, and it’s easy to combine,” concludes Wilms. “Did we coin the phrase? I’m not sure…but I think so. It doesn’t matter. What matters is that here there is an established framework, and it’s available to anybody who wants to take advantage of it.”