The theatre may be small, but it houses big dreams. Behind the curtain at Desert Rose Playhouse in Cathedral City stand the people whose passion inspires the plays, and whose experiences nuance the words and movement of the players.

Artistic Director Jim Strait explains how he and his partner in the playhouse and life, managing director Paul Taylor, view their commitment to the production company: “It’s two different worlds — the theater and the LGBTQ+ communities. But it’s a home for many.”

Born of a dream that passed through multiple hands, the playhouse offers a gay positive, gay-friendly venue in the greater Coachella Valley. Despite the space’s limitations — 8.5-foot ceilings that require artistic lighting adaptations, it’s flexible and cozy. Audiences often describe it as “New Yorkish” in feel and appeal.

It’s served them well. Six seasons in and they produce five to seven shows per year, ranging from revues and comedy to drama and social commentary. Most importantly, every production portrays the LGBTQ+ population in positive, genuine ways.
The goal to create quality theater hasn’t been easy, though. There’s been uneven ticket sales, costs of venue space, and a surprising set-back during the staging of critically acclaimed Angels in America, Part 1, Millennium Approaches by Tony Kushner. 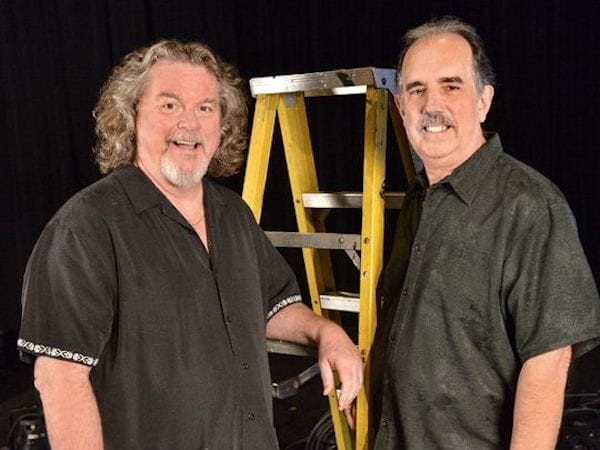 Jim Strait and Paul Taylor's dream of their own playhouse in the valley dates back to 2011.

At three hours long and requiring a solid stable of actors and technicians, the costs alone could have derailed the two. But they committed their resources into mounting the very best production possible. Initial reviews and audience excitement was palpable; however, attendance was sparse.

“We learned from many of our regular customers that they didn’t want to sit through three hours of an AIDS-themed play, no matter how good the play or production may be,” Jim explains. “Most of our patrons had lived through the AIDS crisis in the 1980s and lost too many friends, lovers and relatives. They didn’t want to dredge up the memories.”

The home that so many came to love was in jeopardy. To offset the costs, the cast agreed to perform for free. The production was worthy; the theme significant, they all agreed.

This commitment mirrors the initial decision Jim and Paul made when both took advantage of early retirement options from their southern California jobs in 2003. Having visited Palm Springs together many times over the previous 20y years, and knowing it held a large LGBTQ+ community, their plan came into focus.

“We sold our house in San Diego County and settled in Cathedral City,” Jim says. “We used our combined pensions plus some inherited money to begin exploring different avenues such as establishing a non-profit corporation.”

Ultimately, however, their love of the theater — Jim had experience as an actor, director and manager, and Paul had managed and performed — and personal mission to enhance the lives of others within the local LGBTQ+ population, drove the decision to establish a playhouse.

Enter Arch Brown, who together with his partner, Bruce Brown, founded Thorny Theater many years ago. After Bruce’s death, Jim and Paul helped Arch carry on Bruce’s dream of gay positive productions for the Coachella Valley. For four years, the two worked side-by-side with Arch in multiple positions to keep Thorny Theater alive.

Meanwhile, they began imagining their own playhouse. Their non-profit held donor parties and by mid-2011, they had funds to present Falsetto, which played in October, 2011, at the Indian Wells Theater. The revenue generated tipped the scales and fattened the non-profit’s bank account. Desert Rose Playhouse began to bloom. 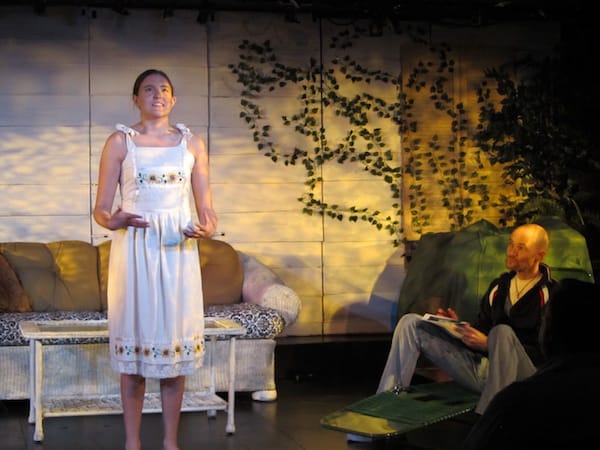 Monique Burke and Jason Hull perform in The Fifth of July.

Then, in 2012, Arch decided to close Thorny Theater. Naturally, he offered the space to Jim and Paul. With only 43 seats, however, there was no way to break even, much less earn a profit, so they declined.

Patrons expressed concern about the loss of the iconic theater. They wanted a place to explore themes important to the LGBTQ+ community. Jim and Paul accepted the challenge of continuing Thorny Theater’s legacy. With the help of a property manager friend, the two took over the restaurant formerly known as The Commissary. They now had a stage and revenue to produce.

They began with a review, Dirty Little Showtunes, which twists familiar pop Broadway songs with humorous lyrics. Originally slated for a seven-week run, the music and comedy struck a chord in audiences. It held over for 24 weeks, setting a new record for longevity in non-profit productions. It also established Desert Rose Playhouse as an attraction for residents and tourists, gay and gay-friendly, alike.

That success helped them to survive the first season’s low attendance of Stephen Sondheim’s Marry Me a Little and Joe Orton’s Entertaining Mr. Sloane. Once again, the pair dug deep into their own pockets to keep the doors open. Eventually, they paid themselves back as production revenue increased.

“We decided to stay in the space,” Jim says. “It’s not a typical theater. It’s more like a nightclub. It is an excellent space to produce and present plays, small musicals, cabarets and concerts, even dance recitals.”

In recent years, Desert Rose Playhouse has earned broader attention. In 2014, they were honored with a PS Pride award for Organization of the Year. Earned not only for their gay positive productions that appeal to a wide audience, the award acknowledged Desert Rose Playhouse for sharing space with local non-profit LGBTQ+ and gay-friendly organizations. Of special note was their donation of show tickets to the Desert AIDS Project.

Jim explains. “We provide 20 tickets a week to the Project, which has amounted to over $84,000 since we began. We just wanted to give people the opportunity to see our work, but being recognized was lovely.”

For more information on Desert Rose Playhouse, and to purchase tickets to its current production, Suddenly Last Summer, visit desertroseplayhouse.org or call 760-202-3000.