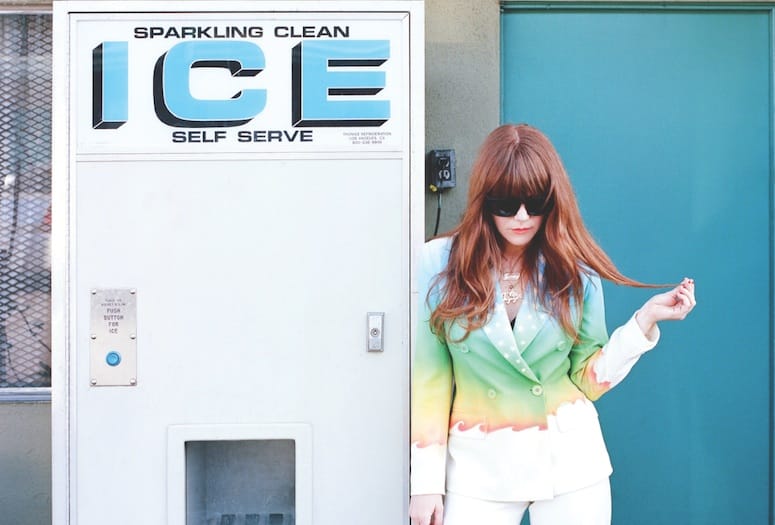 Jenny Lewis will once again be playing Coachella in 2015, a festival with which she has a long history.
Photos by Autumn de Wilde

"Magical things happen in the desert," says Jenny Lewis, the critically acclaimed singer-songwriter who’s had a special connection to the Palm Springs area pretty much all her life. “It’s a close getaway.

There’s that feeling of escape when you drive out to it,” she continues. “And there’s just something about those wide-open spaces. My mom lived out way past Joshua Tree at Twentynine Palms for many years, and whenever I went there, I’d look around and wonder, ‘What are all these people running from? How have they found themselves out here on the cusp of Mars in California?’ There are some secrets out there. You can get military haircuts for about 10 bucks, and there’s a helluva lot of meth — but there’s also some good food, some good thrift stores, and some beautiful mountains.”

A former child actor, Lewis, who played one of Lucille Ball’s grandkids in the blink-and-you-missed-it 1986 sitcom Life With Lucy and had roles in movies like Troop Beverly Hills and Pleasantville, was born in the desert in 1976, in Las Vegas.

“My parents were lounge singers, and my first memory is of my babysitter, who was a female Elvis impersonator,” she recounts. “We were sitting out by a pool in this desert landscape. That is absolutely my first memory, so I always return to that. Plus,” she adds with a laugh, “we’re Jews, you know what I mean? We wandered through the desert!”

Lewis eventually moved on from acting to follow her musical muse as a member of indie-rock favorites Rilo Kiley (who scored a major hit with their 2004 song Portions for Foxes) and The Postal Service (who sold more than 1 million copies of their 2003 album, Give Up), but now prefers her role as a solo artist. Scottish songsmith Johnathan Rice is her significant other, and the two often collaborate, as they did on her most recent album, 2014’s The Voyager. The video for The Voyager’s über-catchy Just One of the Guys features a few of Lewis’ close Hollywood friends — Anne Hathaway, Kristen Stewart, and Brie Larson — all dressed up as dudes sporting facial hair and wearing colorful track suits. “I’m a big fan of the mineral hot springs in this particular part of California,” says Jenny Lewis of the desert.

Lewis agrees that the desert is particularly inspiring for her, creatively speaking. “I’ve been on several songwriting trips out there, and I’m actually due for another one. I’m going to go with some new material. Despite being alone when I go to the desert to write, I somehow always feel safe.”

Not only that, but Lewis finds a certain physical solace when she’s in the Coachella Valley. “For one thing, my hair looks great out in the desert!” Lewis says. “Whenever I return to that climate, my entire body calms down. It must be due to the total lack of humidity.”

Lewis also likes to partake in the wonders of the local spas. “I’m a big fan of the mineral hot springs in this particular part of California,” she says. “I love the desert water and how amazing it feels.

“I don’t want to give away my secrets,” she says of her favorite spas, “but there are a couple of spots that I’ve been going to for many, many years. I actually spent last Christmas out in the desert with a friend whom I’ve known since the ’80s. He’s been going to this one spot for 30 years. We stayed out there, and then I took a little drive out to Palm Springs on the 25th, Christmas Day. I found a Christmas tree lot that was being disassembled. They were taking down the trees, and they gave me a free Christmas tree to take back to the hot springs.”

Lewis will once again be playing Coachella in 2015, a festival with which she has a long history. Jenny Lewis says at some point, she wants to run for mayor of Palm Springs.

“It’s interesting how it’s evolved and how the music has changed over the years,” she observes. “This year, it seems like there will be a lot of electronic music. I went to the very first incarnation of Coachella called This Ain’t No Picnic [July 4, 1999, at Oak Canyon Ranch in Irvine]. It was basically an indie-rock festival. I remember watching Sonic Youth and thinking, ‘Wow, if only one day I could play a festival like this.’ A couple of years later, Rilo Kiley played Coachella [first in 2005, and again in 2008]. And I’ve played it six or seven times since, so I wonder if I’m the one who’s played Coachella the most.”

The biggest crowd Lewis has performed for at Coachella was in 2013 with indie legends The Postal Service, a band that had played only a handful of live shows in the prior decade.

“That may even be the biggest crowd I will ever play to,” she muses. “When you’re up there, it goes very quickly. It was just a perfect night, too. The weather was unbelievable, and people were so excited to hear those songs. I remember being on the side of the stage preparing to go on, and I looked out and I could see the crowd waiting for us. I had a moment that first weekend when I approached the stage where I had to keep myself from crying. I wiped away mascara tears, and hopefully I didn’t mess up any of my parts. Looking at Ben [Gibbard, vocalist and guitarist] and Jimmy [Tamborello, keyboardist] was so moving for me. I was so emotional, and I’m so proud of them. We’re still friends after all these years.” Lewis has some sage advice for virgin Coachella performers. “Don’t get stuck worrying about technical difficulties, because sh-t is going to break up there. Your monitors are going to be f—ed. And your guitar may be out of tune, because the crews are scrambling to get everything up and ready. Don’t let that take you down. The show must go on.”

She’s also taken note of how the attire of the Coachella audience has changed over the years: “There are a lot more flower crowns, and the shorts have gotten quite a bit shorter.” Her suggestion for audience members who will be there both weekends: “Hydrate.”

While Lewis has accomplished many personal objectives in her 39 years of wandering in and out of the desert, she does have one important ambition that remains near the top of her bucket list.

“I have a lofty goal,” she proclaims. “At some point in my life, maybe in about 20 years, I want to run for mayor of Palm Springs, à la Sonny Bono."

OK, so what’s her campaign? “Well, I still have to formulate that. ‘Free thrift store coupons for all seniors.’ Today’s clothes will be quite vintage by then. Maybe that’s what I will run on. That will be my slogan: ‘Everything comes back around.’ Gosh, I’m never gonna win,” she exclaims, then chuckles at the thought.

Not to worry; she’s got a good two decades yet to work on her platform — and several more Coachellas to conquer first.