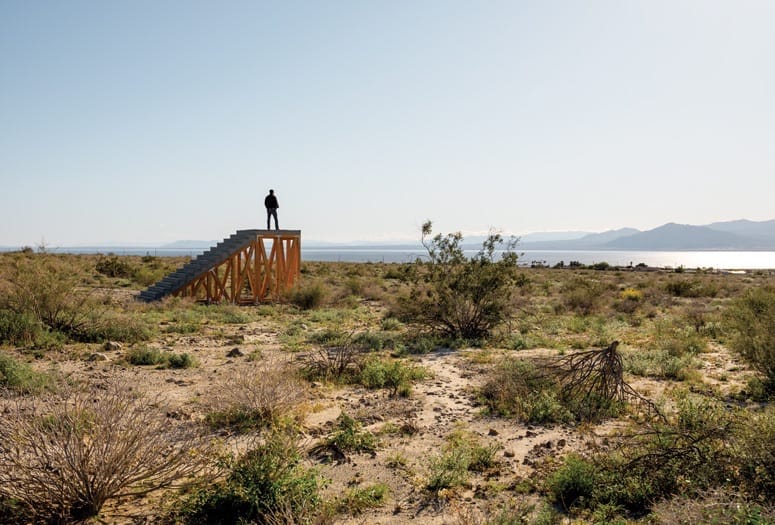 The night before Desert X opened to the public, after a long day of touring the exhibition of site-specific artworks from Whitewater to the Salton Sea and attending an ensuing opening party, I picked up my brother and nephew, who were visiting for the weekend, and started driving north on Palm Canyon Drive toward the visitors center near the Palm Springs Aerial Tramway.

It was dark, about 10 p.m., but I had a flashlight to guide us to the massive screen that shows what appeared to be a flag composed of streaming black smoke. We watched. We snapped pictures. We talked about the artist and what he’s saying with this work. As we walked back, another car pulled up, its occupants curious but hesitant to step out. When we were close enough, the driver — a young Latino wearing a long beard and black jacket that said “security” on the front — poked his head out of the window and asked, “Hey, what’s this supposed to mean?”

To the best of my ability, I recalled how John Gerrard, the Irish artist who created the digital simulation Western Flag (Spindletop, Texas) 2017, for Desert X, explained it to me: “It’s a live simulation of a site in Texas where the first major oil strike in history occurred,” referring to the 1901 Lucas Gusher that famously produced 100,000 barrels in one day. “It’s also an invented form, a flag of smoke that is placed on that site. It’s entirely built virtually.”

Ultimately, Gerrard — who used drone footage to rebuild the landscape as a virtual world, created the flag, and brought it to life using a game engine — presents a striking message about “the willful exploitation and depletion of resources that millions of years ago covered this former seafloor and of the energy needed to produce its current state of habitation,” the artist says. “It’s a grieving flag, a flag for our legacy of comforts. The invisible gas responsible for climate change is made visible so we can consider our role in the warming of the planet.”

The security guard and his family drove off with the knowledge that Desert X has 18 art installations on view through April 21. The works often relate to issues and conditions of the desert, including indigenous peoples (Cara Romero), the border (Pia Camil and Cinthia Marcelle), climate change (Gerrard and Superflex), and even the stewardship of midcentury modern architecture (Postcommodity). The beauty of the exhibition is that it attracts everybody, not only art aficionados but also passersby, adventurers, day-trippers, thinkers, and families.

You can learn more about the artists and find directions to their installation sites at desertx.org or by picking up a program at a Desert X hub (locations listed on the website). 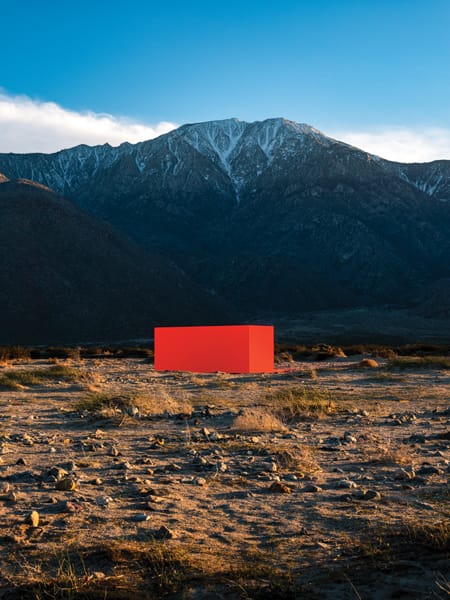 The L.A.-based artist’s monolithic, fluorescent  orange SPECTER appears off Highway 111 near Interstate 10, referencing minimalism and perhaps the possibility of UFOs. 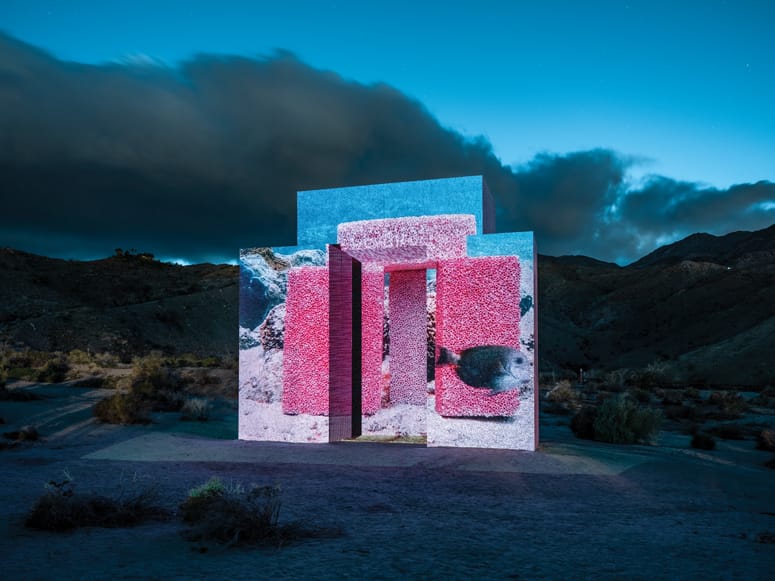 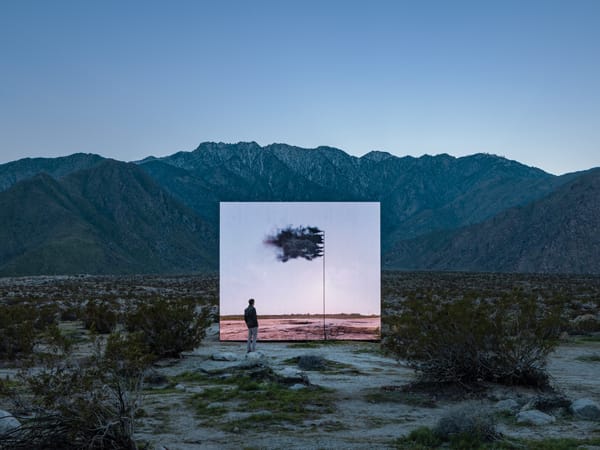 The Dublin-based artist’s digital simulation near the Palm Springs Visitors Center waves a flag warning of our own demise. 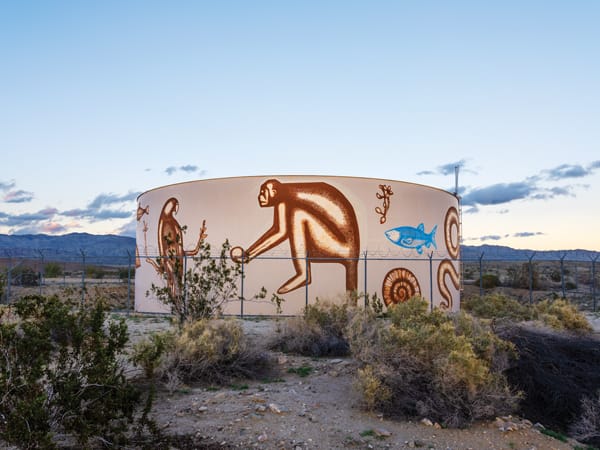 The only locally based artist featured in Desert X, Armando Lerma painted a mural, Visit Us in the Shape of Clouds, on a water tank in Coachella. It depicts a snake, a parrot, a fish, a monkey, a seashell, plants, and a figure appearing from a genie lamp to protect the water. 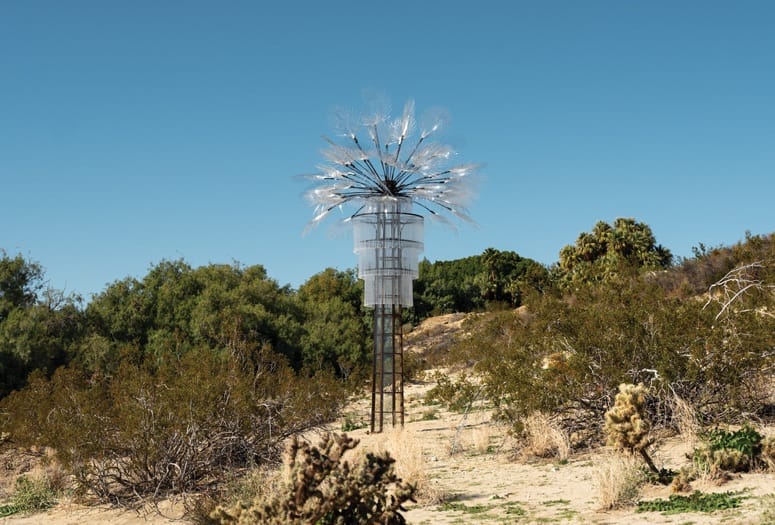 Located in Desert Hot Springs, Ghost Palm by Kathleen Ryan is a translucent sculpture of an indigenous Washingtonia filifera — a manifestation of her fascination with the tenuous balance between fragility and power on the menacing San Andreas Fault. 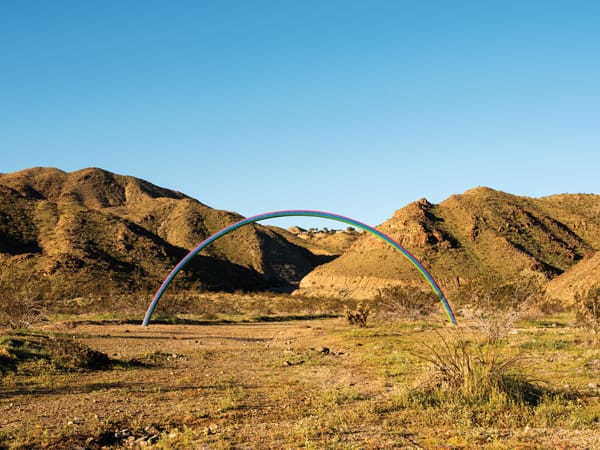 Pia Camil’s Lover’s Rainbow, located across from The Atrium in Rancho Mirage, is fashioned from painted rebar and is a metaphor for abandoned dreams as well as  a gesture that reinserts hope into the land. She installed an identical sculpture across  the border in Baja, Mexico.