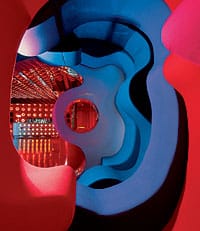 David Glomb has been in Lenny Kravitz’s bedroom. Ditto for Diane Keaton’s — not to mention that of drag queen extraordinaire Divine. Most recently, he entered the private penthouse boudoir of Mr. & Mrs. Smith’s Angelina Jolie and Brad Pitt. You could say that Glomb has made quite a name for himself, never failing to bring his camera along.

At 57, the Rancho Mirage resident is one of the area’s most reputable architectural photographers, known for his iconic images of important 20th-century buildings by significant architects such as John Lautner, E. Stewart Williams, and Albert Frey.

His images fill page after page of publications such as Architectural Record, House Beautiful, Dwell, House and Garden, and Western Interiors & Design. He ventured onto the ostentatious set of Mr. & Mrs. Smith to capture every detail of the seductive decor for Hollywood Life. He previously photographed Keaton’s historic Arizona home for Architectural Digest. And it’s hard to forget his images of rock star Kravitz’s Miami pad featured in Echoes — a matter that shocked the musician himself. “They misscheduled and forgot I was coming,” Glomb recalls, laughing. “It was a complete surprise when I showed up. The bed wasn’t even made.”

Palm Springs Art Museum has been showing Glomb’s photos of Kravitz’s eclectic home, in addition to 38 other arresting images, in an exhibition that ends Dec. 4. Together with museum associate curator Sidney Williams, Glomb selected the photographs in an exhausting process.

“It was quite an unearthing of a lot of material and just as many memories,” says Glomb, who reviewed approximately 8,000 images from his 28-year career. Bold and ambitious, these sharply defined pictures demonstrate his keen ability to capture his subjects’ dynamism through unusual camera angles and an extreme amount of patience.

Given his reputation for architectural photography, it is surprising to discover among Glomb’s work pictures of rhinestone-studded cross-dressers and their extravagant maquillage.  Those images convey his versatile oeuvre.

Born in Cleveland but raised primarily in Huntington Beach, Glomb entered Orange Coast College as a pre-architecture student but soon drifted and took a job at Disneyland. “I wasn’t sure which direction I was going to take; so when I was 17 or 18, I began working as a character, Winnie the Pooh. Everyone loved Winnie.”

Meanwhile, he began filling in as one of the park’s relief projectionists, a job he learned from the head of the film sound division and an early school friend from the drama department. He continued working as a character, touring the country with Disney on Parade from 1969 to 1971 and enjoying every moment of the traveling opportunity.

Glomb not only trotted about the country for two years, but he also learned the technicalities of sound engineering. He became so proficient that he substituted for the show’s professionals several times throughout the tour. By Parade’s close, he could look forward to working as sound engineer with the celebrated musical performances of Grease, The Rocky Horror Picture Show, and The Cycle Sluts.

Over the next two years, Glomb continued to travel around the globe, visiting more than 80 cities and returning to California with his first camera — a gift from a member of his theater family. He quickly took up photography, enthusiastically snapping candid moments of the performance company’s whimsical personalities.

“It was all in front of me,” he remarks. “It was all coming across my viewfinder, and I documented all of it.”

While in Los Angeles, he began working as an assistant to renowned fashion photographer Albert Watson. “He was one of the hardest-working people I have ever known, a perfectionist,” Glomb says. “He once told me, ‘If you put something in front of your camera, you make sure it’s the very best. It has your name on it.’”

Frequent trips to numerous Southern California beaches produced images of the young and radiant faces of Rene Russo and Daryl Hannah, as well as teaching Glomb about light quality and the fashion industry.

“I never wanted to go into fashion,” he now admits. “You have a group of people that are involved: the makeup [artist], the models, the client. There are just too many egos involved. When it would work, it would work beautifully. But more oftentimes, it wouldn’t.”

“I would really study Architectural Digest and try to learn as much as I could from the magazine work, observing how interiors were being interpreted,” he says.

His decision to move to the desert came in 1991, shortly following the Los Angeles riots. Subsequently, he was approached by Adele Cygelman, former editor of Architectural Digest, to produce the photography for a book on the Coachella Valley’s midcentury residential architecture. The result was Palm Springs Modern, published by Rizzoli in 1999. The book is a wellspring for modernist architecture and design aficionados, as well as a triumphant effort on behalf of Cygelman, Glomb, and Joseph Rosa, chief curator of the National Building Museum in Washington, D.C.

Glomb’s photographs of Richard Neutra’s 1946 Edgar J. Kaufmann House are nothing short of exquisite. The same could be said for his images of the Max Palevsky House designed by Craig Ellwood in 1970. He effectively captures the intimate details and sweeping geometry of the structures in dramatically revealing light. Every photograph demonstrates his excellent understanding and fond appreciation of what the architects were trying to express in their designs, his images punctuating their every thought.

That is not to say that the project escaped challenges. “I try not to be critical of a designer, since I am there to decipher it as best as I can,” Glomb says. “But some of the interiors were just not photographable, although the home might have some very strong architectural bones. It was difficult to find residences whose interiors matched the integrity of the architecture.”

However, he remains pleased with the project, noting that it was the first published book on midcentury desert architecture. Certainly his images played a substantial role in reviving the interest in decades-old designs — a real-estate market that has since prospered.

Much like spectacular architecture is recognized as such by the sum of its parts, Glomb’s remarkable talent is well rounded. Perhaps a little like Ezra Stoller and a dash of Diane Arbus, he derives his success more from intuition than anything else. As in the past, he remains extraordinarily opportunistic, looking ahead through his lens, never wanting to blink and miss a moment of life’s abounding visuals.