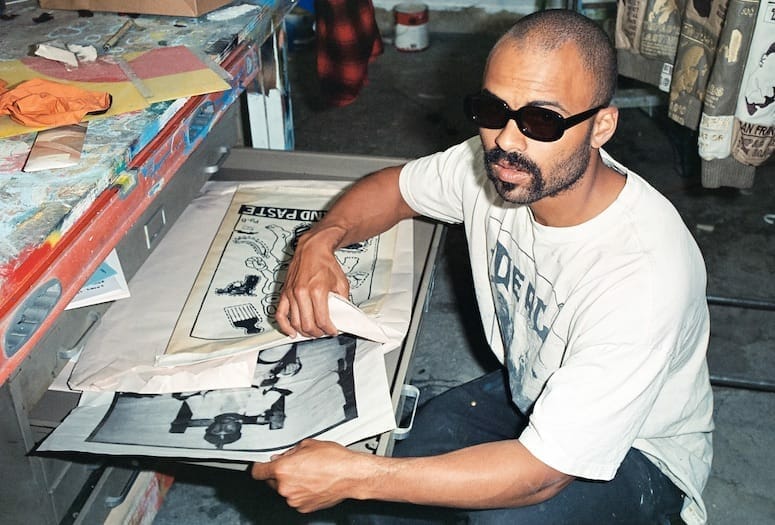 Artist Devin Reynolds sorts through materials in the studio.
PHOTOGRAPH BY JOHN CHONG

If you went to elementary school with Devin Reynolds, pull out your old binders. You might have an early original from a rising star of the art world.

Raised in Venice, California, Reynolds dabbled in surfboard painting and notebook decorating as a kid. However, it wasn’t until college, when a surgery grounded Reynolds from usual pursuits like skating and rugby, that he really began to focus on art. His massive-scale paintings combine the sights and symbols of his youth in Los Angeles with imagery from post-World War II advertising. 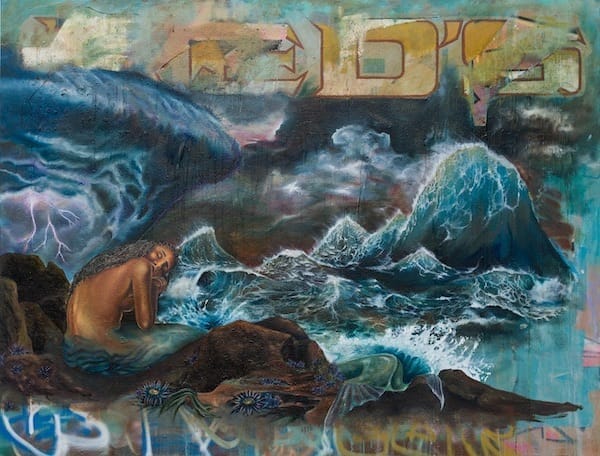 PHOTOGRAPH COURTESY RESIDENCY GALLERY, 2020
I know you feast on fire, dreaming in the breeze, while they run for shelter by Devin Reynolds.

As a resident with the Palm Springs Art Museum Outburst program, which encourages artists to explore fresh forms and bodies of work, Reynolds grapples with a new physical and conceptual space: the desert. The results — on view at the museum March 31 to July 3 — will likely resonate with Coachella Valley residents. “The biggest compliment I can get is, ‘Whoa. I feel like I was walking down the street in my neighborhood when I saw your piece in [that] show,’ ” Reynolds says.

Your work frequently includes references to postwar American advertising and product design. What drew you to that art style?

My mom is an antique dealer. As a 12-year-old kid going to set up my mom’s flea market booth, I wasn’t necessarily going through the boxes of stuff being like, “Oh man, this is a really cool salt-and-pepper shaker. I can’t wait to have this in my house one day.” But I definitely was around all of these things that I’ve referenced a lot now. Whether I knew it or not, they made an imprint in my DNA.

The first couple paintings I made didn’t have those references in them. They were really heavy. They were just text-based, no figurative imagery at all. Then I did a residency at the Joan Mitchell Center in New Orleans. That was the first time I had ever made a painting in a real studio setting. Before that, I was making art in my living room or out in front of my house on the top of my trash can.

[The residency] really pushed me to dive into making figurative imagery. Not having a background in traditional painting, an obtainable way in [at] that moment was a lot of that postwar graphic imagery that you see in advertisements, boxes, and packaging. 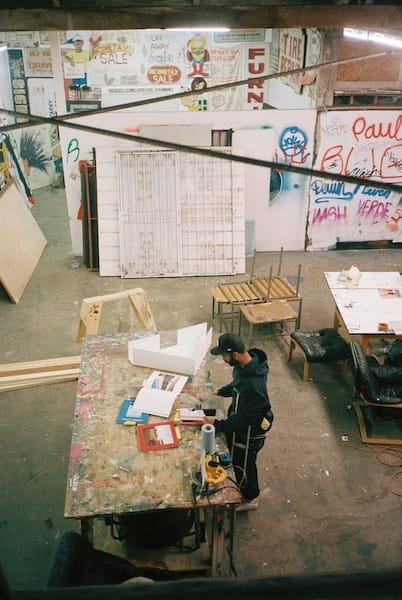 PHOTOGRAPH BY RUBEN PRECIADO
The artist in his studio.

Those designs were created to sell things to people in the 1950s, ’60s, ’70s — what new resonance do they take on when featured in your paintings today? What new dimensions are added?

[Using them] allows for me to create different timestamps in the work, which I really like. I have the physical object as a representation of that time and space, but I think it [also] creates a conversation between me and the viewer of the work, the viewer and their own nostalgia.

Even though some of the people that designed the imagery that I use in my work might be anonymous — maybe they worked for [an advertising] firm way back in the ’60s, and we might never be able to find out who actually put their hands down on that drafting table and drew that design — it’s still there in the work and allows for there to be a conversation across these different disciplines and time periods.

I think that is really important in my work. It keeps me engaged knowing that’s a part of the story. It’s not just me [in the piece].

Talk to me about the experience of sharing your work and watching it be interpreted, witnessing those connections between your art and the viewer.

I love it. A lot of artists that I encounter in conversation take the stance of not caring how somebody interacts or interprets their work — which is cool, but I’m definitely interested in how people feel about [my art].

[When my show] “Shattered Glass” was open at Jeffrey Deitch’s gallery in L.A., there were quite a few times when I went to the gallery and I had the chance to interact with people on a tour of the show. It’s incredible, the things that people saw in the work that I would’ve never thought that somebody could interpret in that way. You could have the utmost intention of meaning something one way, but then if you get five people to look at the painting, each person might think of [it] in a totally different way. That excites me.

If there is something that painting does do, I think that’s a part of it — allowing people to step outside of their immediate surroundings, context, or circumstances and see something different and, hopefully, challenge something, have some kind of visceral interaction. Otherwise, man, I would hate to do this if nobody cared.

PHOTOGRAPH COURTESY JEFFREY DEITCH GALLERY, 2020
Hanging on by a Thread by Devin Reynolds.

What’s a particularly memorable interaction you’ve had with one of these viewers?

This artist, Kevin Brisco — he’s a really brilliant painter who graduated from Yale a couple years ago — came to my first solo show in New Orleans at this small community gallery called Antenna Gallery. [Kevin and I] had just met; we weren’t super tight yet. But Kevin happened to come to the opening.

I probably was already feeling kind of nervous and insecure because Kevin is a classically trained painter, really knows how to paint. I had been aware of his work already before I met him. He came in, and I’m already like, “Damn. This guy is probably looking at my work like it sucks.” And I just hear him bust up laughing, dying [at the phone number].

To see him come and experience the work and appreciate it, but also see that note that I was trying to hit and catch it and laugh, it was huge for me. I didn’t really sell any work from that show. Nothing really happened immediately after. I wouldn’t say my career went flat line, but I definitely had some silence for a little while after that that made me question whether or not I should go on this endeavor being an artist. But that moment with him, even though it might have seemed small to him or inconsequential, was huge, because I felt validated by somebody that I looked up to and respected — and, also, I definitely was trying to make somebody laugh when they read that phone number. That was a good moment.

Responses have been edited for clarity.