Dionne Warwick will be in Palm Springs this coming week to mark her spot on the Walk of Stars. She will return to the desert for a concert  appearance on Dec. 17 at Fantasy Springs Resort Casino in Indio.
PHOTOGRAPH COURTESY FANTASY SPRINGS RESORT CASINO

If you’re on Twitter, here’s something you likely already know: Dionne Warwick is the queen of everything she surveys.

There’s her illustrious career as a peerless song stylist who gave the world multiple timeless tunes, such as those 1960s sing-along staples “Don’t Make Me Over,” “Do You Know the Way to San Jose?” and “I Say a Little Prayer.” She became the voice of iconic songwriters Burt Bacharach and Hal David.

In 1985, her mega-hit collaboration with Elton John, Stevie Wonder, and Gladys Knight, “That’s What Friends Are For,” became an anthem and raised millions of dollars for amFAR, the American Foundation for AIDS Research. Along the way, she’s collected five Grammy Awards, including a Lifetime Achievement Award in 2019.

In the early 1980s, Warwick hosted the weekly television musical series Solid Gold, which showcased live performances of the top songs of the era. In the 1990s, she hosted a series of popular infomercials for the Psychic Friends Network. Always the humanitarian, Warwick appeared on the TV series The Apprentice in 2011 to raise money for The Hunger Project.

Lately, it’s her tweets (or “twotes,” as she prefers to call them) that have caused her to resonate with a new (and mostly younger) audience, while reinforcing the admiration of her longtime fans. She famously asked actor Jake Gyllenhaal to return a scarf that belonged to his former girlfriend, another chart-topping singer, Taylor Swift. And her comical tweet to Chance the Rapper that asked him why he felt the need to refer to himself as a rapper if he really is one, has resulted in her newest single, “Nothing’s Impossible.” Her newfound popularity with Millennials and Zillennials even led to a cheeky appearance as herself on Saturday Night Live earlier this season.

If you need further convincing of her status as an entertainment immortal, Warwick will be fêted during a gala at Oscar’s on Dec. 7 and receive a star on the Palm Springs Walk of Stars on Dec. 8. Her desert tour will conclude with a concert date on Dec. 17 at Fantasy Springs Resort Casino in Indio. 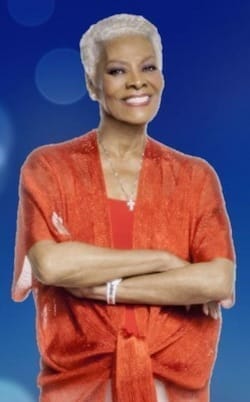 Warwick took a few minutes out of her schedule to chat with Palm Springs Life about her newest honor, her groundbreaking career, and connecting with new fans.

Congratulations on receiving a star on the Palm Springs Walk of Stars. What does this honor mean to you?

Well, I really didn't even know that there was a Walk of Fame in Palm Springs and to have been thought of to join those that already have been honored is amazing. I'm thrilled about it. I'm happy to be included.

I’m curious about your connection to the area. Were you friends with famous desert residents such as Frank Sinatra, Dean Martin, and Bob Hope?

I spent time with Bob Hope and at his home. I've been very, very fortunate in that I've been able to be embraced by those particular iconic entertainers.

You're the acknowledged queen of Twitter. You impart your wisdom to so many people. What are you getting in return?

Oh, I'm getting a lot of information from them. They're keeping me absolutely current with what's going on, how they're feeling, and they're entrusting me with their thoughts, which I think is wonderful.

You've crossed the generational divide in a way few other entertainers have. How does it feel to bridge this huge gap and communicate with really young people?

It's sensational, I think my allowing them to understand that a grown up is present now on Twitter. And they appreciate that and the fact that I let you know that I would be asking questions other than expect answers. And in turn they could, of course, ask me questions and they would certainly give answers. So, I think that's the relationship that we built and it's been absolutely wonderful.

It also seems to have had a really positive impact to your career. You have a brand-new song called “Nothing's Impossible” with Chance the Rapper which came about because of your tweet to him. I just listened to it and it's an amazing duet.

Well, thank you. I appreciate that. I'm thrilled about it, as well. And it's wonderful to know that Chance is as happy about it as I am.

You've been a groundbreaking artist throughout your career. In the 1960s you performed in Paris at the Olympia Theatre and L'Espace Cardin. What did it mean for a woman of color to be so accepted in Paris when you were so young and there was like still so much racism in the United States?

I wasn’t the first. There were Josephine Baker, Eartha Kitt, Nancy Holloway, there were quite a few black women who were very popular, prior to me.

"...all of my songs I feel are my favorites. I don't have a favorite song."

In the 1960s when every song you released went to the top of the charts, you worked with a lot of white producers and songwriters. Did you receive any kind of backlash from the black community for this?

At that period in time, I was fortunate enough to be able to collaborate with two of the most prolific songwriters of our time. Bacharach and David. I didn't feel any reason to have the feelings about who I was recording this with or how. It's just recording some great music.

Besides your huge hits that we all know, I wonder if there is a deep album cut that you wish had got more attention? I think one of your most beautiful songs ever was your rendition of “All In Love Is Fair.”

That’s by Stevie Wonder of course. That's a song that I decided I wanted to do in concerts, but all of my songs I feel are my favorites. I don't have a favorite song.

You were very close friends with Luthor Vandross, who is another impeccable song stylist. What are your memories of working with him?

Luther and I were not just friends, we were more like family. And I miss him terribly. We spoke every single day. I called him a gem. And like I said, I miss him an awful lot. And he told you the truth. Ninety percent of the last CD that he produced for me, all the songs were done in basically one take. And that's something I was always known for.

You energized your career in the early 1980s when you hosted Solid Gold and you introduced so many new wonderful entertainers. What are some of your memories of that experience?

Solid Gold was absolutely an incredible venue for me to have been able to do. It was fun, full of music, of course. And I'd love to be there again, to meet people that I knew and have a door to more clients in the industry and then to get to know some new people. So Solid Gold was definitely solid gold.